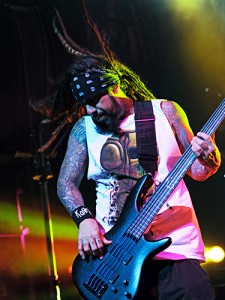 To date, Korn has sold 32 million albums worldwide as of 2009, while earning six Grammy nominations—two of which they have won for “Freak on a Leash” and “Here to Stay.”

We caught up with Fieldy from KORN on the tour bus before their set at Mayhem Festival at Riverbend. Fieldy was in the process of putting in dreadlocks for a friend while we had our interview to discuss the band and some of his side projects. Who knew he had hairstylist on his resume?

Amy: I know you play bass and guitar, but do you play anything else, or do you wish that you could secretly play something else?

Fieldy: The only thing that I can’t do that I wish I could is full on shred solo on guitar. I can play guitar but I can’t shred.

Amy: I know you also played with one of my favorites, Lil Wayne. You were on the track “Prom Queen,” what was that experience like?

Fieldy: It was cool. He was playing guitar in the video. Lil Wayne just started playing guitar, and he loves it. So he’s like, “Alright bring out my guitar” and they brought his guitar out, and it was like a $25,000 guitar or something. Everyone was tripping on like the best guitar you could ever buy. I’m not all into guitars like that, so I don’t even remember what kind it was, but I know it was top of the line. He pulls it out and he’s like, “Alright, where do I plug in at?” When you’re on videos you don’t plug in, but he ended up making them plug it in.

Amy: So he’s been recording stuff from jail, like calling in and recording stuff by phone. It’s really funny the things he has been doing lately. So that’s probably not going to get him out any sooner. 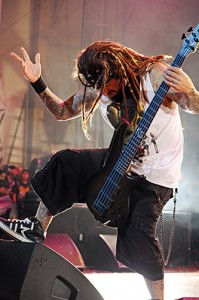 Amy: So what has been one of your most satisfying career moments?

Fieldy: In the past or with KORN?

Fieldy: Probably completing my STILLWELL album with my other band. I mean it’s done. That was pretty satisfying to play guitar. I’m a bass player and it’s finished and I’m proud of it.  I finished a bass album, which is pretty satisfying. It’s 18 songs, instrumental, from like jazz music to funk, Latin, all kinds of different styles of music all on one CD. So I guess doing those kinds of things recently on the side.

Fieldy: I don’t really care about those things. I don’t know. I have some.

Amy: Do you have them in the closet or where do you keep them?

Fieldy: No, I have them out.

Amy: So where do you live now?

Fieldy: I live down in Orange County, about an hour north of San Diego.

Amy: You have two daughters, right, and a son?

Fieldy: Three daughters now, I just had another one.

Amy: Do they listen to KORN? What advice do you give them, growing up? 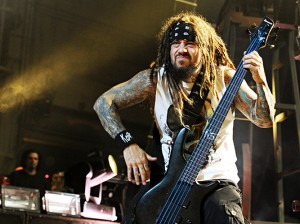 Fieldy: I don’t really give them advice, I just let my kids watch me live because I think I’m living the best life that I can live, a life that pleases the Lord, and hopefully they can grow up seeing that.

Amy: So lead by example. Do they come to the shows, do they listen?

Amy: You had your autobiography out last year too, right?

Amy: Did you do a book tour?

Fieldy: Yeah I did a little bit, but most of it is just going out with KORN, and I did some book signings out on tour.

Fieldy: It’s funny to say things you’re proud of,  it sucks because over time when you put a book out, you’re like, you want to put another one out because life keeps going, you know? And I’m like in a different phase of my life, and so I don’t know if people are ever satisfied.

Amy: You don’t want to do another one?

Fieldy: I do want to, just so I can say what I want.

Amy: A lot of people find it hard to write books, they hate it. They get under contract and then they can’t finish.

Ryan: I heard how you said you want to live your life to suit the Lord and many people have said KORN has really bad lyrics. How do you think your involvement in KORN still helps you follow in your lifestyle of Christianity?

Fieldy: Like I said with my kids, the best thing you can do is to let people watch you live. Not tell them how to live or what they should stop doing. That is something that only ends up with people being religious and saying, you have to do this, you have to do that. There are a lot of things I don’t do, but I don’t tell people they can’t.

Fieldy: Yeah, because you can’t, if I’m living my life, pleasing enough, that people will be like, “I want to live like that cause I’m doing it right.” So I can’t really say, you know? If Jonathan wants to use bad words, maybe one day he won’t. I don’t know. But it’s not that big of a threat. It could be worse. I still have things where I fall short in certain areas. Sin is sin. I don’t know if it matters what. 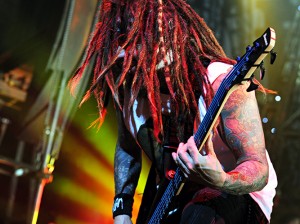 Amy: Do you have your Fred Durst tattoo?

Fieldy: Yeah he did a KORN tattoo on my ankle. (He shows it to me.)

Amy: You guys have the new album, do you want to talk about that?

Fieldy: New KORN album came out last week. “KORN III, Remember Who You Are.” I don’t even know how it’s calculated to see how it is doing. After it’s been out for a week, you get a sound scan to tell you if it’s number one in the country or whatever.

Amy: You don’t know yet?

Fieldy: It came out in a few places like, Japan was number five, Australia was eight. Germany or something was eight; I don’t know something like that.

Amy: Was the process done differently, putting this one together?

Fieldy: We actually just went in with the old school approach, just jammed out.

Fieldy: Yeah, Hollywood. We got together in a little rehearsal room and that was it. Simple. Back to how we did it in like ‘93. Just jamming out.

Fieldy: We meet together as a band. A lot of people don’t do that anymore because of computers, you don’t have to.

Amy: But you have to be kind of on your game with that? You can hear everything you do.

Fieldy: You gotta be like straight inspiration, on the spot.

Amy: Anything else you want to share with us? Deep dark secrets, guilty pleasures?

Fieldy: Guilty pleasure, when I’m just laying out in my backyard, I listen to Justin Timberlake.

Ryan: We were also told to tell you that you had the baddest bass beats on the Mayhem Fest and the best moment of Mayhem was your bass solo.

Fieldy: Oh yeah I do a little bass solo with Ray my drummer. 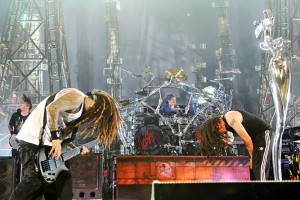