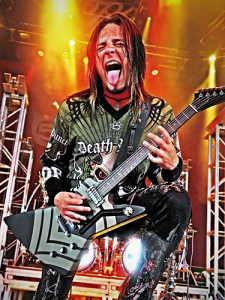 We sat down with Jason backstage at Mayhem Fest to talk about the tour and the band’s second album, War Is the Answer, that was released September 22, 2009.

Amy: We just saw you guys at Rock on the Range.

Amy: That was really fun, that was a really awesome weekend. Any crazy stories from that weekend?

Jason: None that I can share with the public. No, just a really hot, fun day.

Amy: So you have had a lot of different experiences playing in bands like Alice Cooper and Hillary Duff and now this. Do you miss pop, do you secretly love pop?

Jason: No, I have always had the same answer. I wanted to be a guitar player. I didn’t want to work at Target. I didn’t want to sack groceries for a living. I didn’t want to drive a truck, so this is all I have done.  I just sort of stuck to a certain path, and when someone said, “I’m going to pay you a bunch of money to go play guitar” I said,”Fine.” Whatever you’re doing, as long as it’s music, there is something to be learned. I just figured this was a good chance to get an education where most guys that play heavy metal or rock don’t really get to have the chance to see that side of touring and that side of the business. So I was just there to have fun, make money, and learn anything I could learn from the experience. It was a positive experience. You have to understand that those people are multi -multi millionaires, and so it’s everything was five-star on the road and the one thing about doing the pop scene was a lot of television, so I had a chance to sort of introduce myself into what it meant to do all these shows. Morning shows, night shows, prime time, awards, VH1 specials, it was all that kind of stuff, which was really cool. Doesn’t really come to heavy metal like it does that world, you know? So it was kind of cool. They keep those studios freezing cold. We’re actually doing Jimmy Kimmel August 17th.

Jason: I remember doing Regis and it was 62 degrees in the studio at 5:30 am. I’m sitting here thinking, “Who the fuck wrote this?” 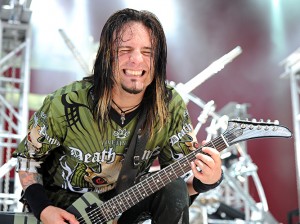 Amy: The only way to stay awake I guess that early in the morning.

Amy: So you guys have the album, War is the Answer. What is the story behind the title?

Jason: It was meant to have people sort of read it and go, “Wow, bold” and our outlook is, we are very serious about what we are doing, and it is sort of a do or die competition with us. You know people are always going, “War isn’t the answer, peace is it” and I know our opinion is, divide and conquer. Get out of our way or you will be smashed.

Amy: I mean personally I like competition, so it’s healthy.

Jason: We don’t take second place easily. So I mean “War is the Answer,” I am personally a military history enthusiast, so I have racks and racks of books and DVDs and stuff on the older wars, World War II, Vietnam, so I kind of like all of it. And then we also just  went to Iraq.

Amy: Yeah that was my next question, you played 10 dates in Iraq, and supported the troops. That has to be an amazing thing.

Jason: Yeah our music sort of resonates with them.

Jason: Yeah they sort of gravitated towards our band, and we developed this respect with the Marines. As we started touring around the states we would meet more and more Marines and service people.

Amy: They aren’t bad to have behind your back.

Jason: No, no and they are all coming out and going, “Dude I just nuked a whole fucking village listening to your first album.” We’re like, “Okay cool, thanks.” I guess war is the answer for you then.

Amy: But the album really wasn’t about the military war, right?

Amy: I thought maybe it was like tongue and cheek a little bit.

Jason: No nothing is tongue and cheek.

Amy: What was the most memorable experience Iraq other than the sand?

Jason: Probably eating the food rations, no. The most memorable experience, I mean really, there were so many. We got to screw around with some of the big guns. We met every high ranking general in every base and that was a privilege. They have these coins and apparently they are extremely rare to be given, but they gave us those and that was extremely special. It was great. We also flew around in a C-130 airplane.

Amy: Did anybody get sick?

Jason: No. They all let us fly it a little bit, Apache helicopters flying over our gig, blowing off signal flares and stuff. The whole thing was pretty amazing.

Amy: You’re like, if only I could bring that pyro on the road.

Jason: Yeah it was amazing.

Amy: So you’re the newest member?

Jason: I am, the newest member.

Amy: Did they haze you at all when you got on board?

Jason: No not really. I mean there was sort of a mutual respect there, you know I came in there working hard as a professional. I suppose they could have, but we have all been friends for a long time. I’ve known these guys for a long time.

Amy: Did you guys grow up together?

Jason: I have known Jeremy and Zol since like late 90’s. Jeremy and I have always been friends, and there was always talk of me coming into the band, but we just had to figure out the right time. So there wasn’t really any hazing.

Amy: So what’s up next for the band in the fall?

Jason: A headlining tour is in the works. We will be touring with a big band.

Amy: But you can’t tell me who?

Jason: Can’t tell you who. I want to make sure it’s okay to say, because if I say it, and I wasn’t supposed to, then I’m in shit. But it’s going to be exciting. It’s a five week tour, all arenas, we’re talking about trying to start a brand new record.

Amy: Are you writing for it? 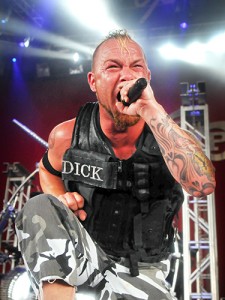 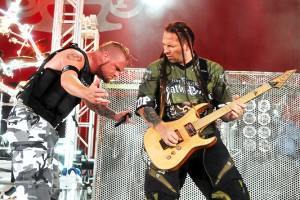