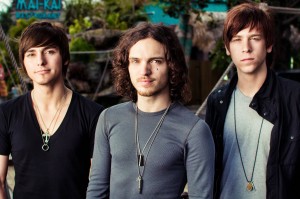 The Cab is an American rock band from Las Vegas, Nevada, signed to Decaydance Records. Their first album, Whisper War, was released on April 29, 2008. We caught up with guitarist and piano player Alex Marshall before Warped Tour to discuss their tour experiences and what is next on the horizon with their new music.

Amy: So have you been on the tour all summer?

Alex: We have been. This is actually our first time on the whole tour.

Amy: So how has it been going?

Alex: It has been great. There have been so many kids out each day. It has been like 10 to 20,000 kids every day. There are so many different kinds of genres on Warped Tour, so you get to hit so many kids that might not be into your genre. It is great publicity and it’s great to be out there getting the exposure, but it’s really hot.

Amy: Yeah it is the hottest summer I think and it has been brutal this week.

Amy: What has been your most memorable tour moment so far?

Alex: On this tour, a few days ago in Florida we got to play on the main stage. We get to play on the AP alternative stage usually, but that day we got bumped up to main stage. That was the best moment on Warped so far. We were fortunate to get a chance to shine.

Amy: Are you guys working on any new music right now?

Alex: Yeah, we actually have been writing since August. We have recorded, I think, like 40 to 50 songs. We have chosen 10 to 12 that are going to be on our record, but we don’t have a release date or anything set in stone yet.

Amy: So what is your process when you guys write?

Alex: It fluctuates. Sometimes it is me coming up with a cool song and bringing it to the singer, or the singer starting an idea and bringing it to me. Usually with the writing it is me and Alex. It is a collective process between the two of us. We feed off of each other’s energies and “stem” a song idea. Sometimes the music comes first and sometimes it is the melody first.

Amy: Do you use a piano when you write?

Alex: When I write, I use a recording program called Logic and I play it off of a keyboard, but I will do a full instrumental starting with, drums, strings, it just depends on what it is.

Amy: You guys are all named Alex, so do you have any nick names?

Alex: Myself, my singer, and my drummer are all Alex.

Alex: None of us go by, “Alex.” My last name is “Marshall,” so that has been my nickname. “Johnson” is our drummer’s last name, so that is what he goes by and I don’t know why the singer is not Deleon, but he lucked out. He is “Singer.”

Alex: Yeah it’s funny how easy it is when we’re drunk. It’s funny how the kids have actually connected with the nicknames. They actually say, “Singer” and “Marshall” and “Johnson.” Some people don’t even know that our first names are all Alex.

Amy: So have you gotten to catch any of the other bands on tour? And who are you most excited about?

Alex: We actually have been on the AP Tour. We have been out with, Never Shout, Hey Monday, Every Avenue and The Summer Set. All those bands except Every Avenue are on Warped Tour right now, so it’s just like AP Tour carried over into Warped, so I have been watching the same bands. I have also caught other bands like, VersaEmerge and All American Rejects who were on the first half of the tour, so I watched them a lot. I have also seen a band called Pretty Reckless, which is really good.

Amy: There are so many bands and they are all playing at one time, so it is kind of hard to see everybody.

Alex: Yeah, they are all over the place.

Amy: Recently, you guys were on The Real World, right?

Alex: Yeah, we were.

Amy: How was that experience? That seems like a crazy place to be.

Alex: I actually didn’t know how to react. We had cameras that just followed us, and I’ve never experienced that kind of thing before. When we were walking out, just on the streets, walking to bars or whatever, that was okay, but when we got to the house I was kind of uncomfortable at first. It took some adjusting. It’s not like they were following you around the house, but there were cameras in every corner of the house. I don’t know. It was still great, a lot of fun. The people on the show were great. I connected with one of the girls on the show, her name was Callie. She is a sweet heart and I had a good time.

Amy: I could not imagine living like that for months on end like they do. I don’t really know if I could be under the microscope like that for that period of time.

Alex: Yeah I don’t know. I feel like, as much as they would drink and party on the show, I feel like that would be just setting myself up for embarrassment.

Amy: Exactly, on a regular basis.

Alex: Yeah, every day. It’s like expected from all of them to do it.

Amy: Well, that is the thing, right? You have to sign a waiver to commit to ruin your liver for four months.

Amy: Every chance of ever getting a real job again.

Amy: If you weren’t a musician or a rock star, what do you think you would be doing?

Alex: Actually, we got signed halfway through our senior year of high school, so I mean, I had already had all of my schooling  planned out and was ready to go to college. Not going to school was never really an option for me.

Amy: So you were going to go to college?

Alex: Yeah, of course. I took my school work very seriously. My dad is a dentist, so I was going to go to UNLV and I was going to get into pre-med and I was going to play baseball there. I already was signed up to go to school and then this happened. I was kind of in a little twist with what to do. There are so many people that try half their lives, or their whole lives, just to get a break so I felt like I should take it. I was just so young that I was fortunate enough to even get a chance to act on it.

Amy: Yeah, give it a shot at least.

Alex: Yeah, I mean you can always go back to school, but you can’t always get another shot at music.

Amy: What was it like growing up in Vegas? I know that is where you guys are from. Is it possible to have a normal life as long as you stay off the Strip?

Alex: Yeah, I mean it’s funny to hear that from people that, you know, who maybe have never been to Vegas. A lot of people ask, “Do you live in a casino? Where do you live?”

Amy: You guys are from Henderson, right?

Alex: Well we are from all over the valley. I am actually from the north side.

Alex: The strip makes up a very small percentage of Vegas. So growing up is actually pretty normal. It’s like living in Phoenix.

Amy: Except you guys have no seasons.

Alex: I guess we don’t really have full on “seasons” but I guess we have a really hot summer. And then in the winter, if I want to drive a half hour, we have a ski resort in Vegas. It is a really shitty resort, but we can touch snow.

Amy: I have talked to people from Florida and they have never seen snow sometimes, it’s really funny.

Alex: It is weird that people have never seen mountains. We are surrounded by mountains for sure. It’s pretty much normal living there for me. I would say that the biggest difference would be that everything is 24 hours. If you want to go get food or if you need to go to a gas station, or if you want to go shopping for a party or whatever, that is at your disposal all the time. That is the biggest difference from everything else.

Amy: So you guys have been all over the U.S. now, what is your favorite place to play?

Alex: We did one tour with a band called Panic! At the Disco and Dashboard Confessional. We got to play at the Staples Center which is where the Lakers play and that was pretty unrealistic, but that was probably the best show we have played. I would say, realistically, I liked to play in West Virginia or Boston, the Boston House of Blues. The Boston crowds are just awesome, except in the winter, Boston is awful in the winter.

Amy: Well, we will look forward to seeing you tomorrow, and we appreciate the time you took to talk to me today and good luck with the rest of the tour.

Promotional Photo Provided by the Band.