Rob Zombie performed as part of the Mayhem Festival in Cincinnati last Wednesday alongside KORN, Lamb of God and others. The resilient crowd stayed through the rain to enjoy a full day of metal music. Zombie performed a pyro filled, high-energy set for the crowd at Riverbend Music Center.

We caught up with Piggy D, the bass player for Zombie,  after the festival to discuss his day in Cincinnati and the upcoming fall tour.

Amy: Are you guys working on any new music right now out on the road?

Piggy: Yeah, we’ve got 3 new songs that will hopefully be done soon. I don’t know exactly when, but they are really really cool. Hopefully they will be out soon.

Amy: I know that you kind of have a background in graphic design and photography, how did you start doing it? I know you do graphic arts for other artists, but do you do any fine art photography? What is your passion with photography?

Piggy: Photography is kind of one of those weird things. I have been into it since I was a kid, but I haven’t really had the time to really hone in on one thing. I mean I bring a camera with me everywhere and I shoot the band and I do some stuff for the album. I don’t really focus on one thing, it primarily just happens to be Rock stuff and shooting a few different artists. I love portrait stuff; I love anything that I am passionate about. I love to shoot. The only thing I haven’t done a lot of is live photography.  It takes time to really develop a voice or a style. I was a graphic artist before I was a photographer. People started paying me to do art. I got serious about photography later on, so now it is really starting to merge the two, which is cool. It is changing the way I shoot, because a lot of the music is crazy and colorful, a lot of layers.

Amy: Yeah I think a lot of graphic artists kind of migrate to photography. I think it gives you an advantage because you know how you want to frame the images and what you want to do with it in the end. If you have that skill, it can really enhance it and make some awesome work.

Amy: I was just in New Orleans a couple weeks ago and I know you lived there before Katrina, do you still live there, or have you been back? They kind of can’t get a break with this oil spill, so I didn’t know if you were still involved with the area, or if you had moved out after Katrina.

Piggy: That poor city, they really can’t get a break. I moved there just prior to Katrina; I think like 3 months. I got a house, got all set up and moved in, and it was weird. It was just one bad event after event ever since I got into this house. It’s a long story, but the day before the hurricane hit, I went back to where I was before the house, and that was it. I never went back. I still have a couple friends that live down there, but I just haven’t been back. I was basically homeless for about 6 months after that with the way things worked out. I ended up back in Los Angeles which is where I am from. Every time I leave Los Angeles, I have wound up back there. 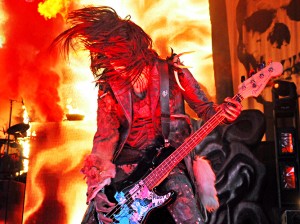 Amy: I know you like all kinds of music I’m sure, what is your favorite thing right now?

Piggy: I have some Metal stuff that I grew up with, and it’s like any time I talk to people about music they automatically assume that’s what I listen to. People are like, “Do you have the new Slayer album?” and I’m like, ” No, not really.”

Piggy: Oh yeah I have a Lady GaGa shirt, I think she is awesome.

Amy: She is awesome, she’s amazing.

Piggy: I really do listen to everything. I listen to country; I listen to a lot of pop stuff. Lately it has been this band called The Noisettes; they’re from England. They are almost indescribable. I don’t even know what type of music they are. I guess you call it Indy Rock, but it’s really all over the map. I just got into that band a few months ago, so I’ve been trying to get my hands on everything they put out. We were just in St. Louis and they have a lot of my favorite record stores down there, and I got this new Spirit record that I am really into.

Amy: Do you do any like any of the new Jack White stuff?

Amy: Really? You know he’s so talented. He is one of the most talented guys around. I saw him last time I was in Nashville. He has got some good stuff going on right now.

Piggy: Yeah man he has just got the whole record label thing going for him. I always keep my attention on him because I just think he’s one of the most creative and smartest people in the business right now.

Amy: You guys have Joey from Slipknot on the tour. I talked to Wednesday 13 while we were there on Wednesday to discuss the new Murderdolls music. Is Joey going to be on for the duration of the Zombie tour?

Piggy: Yeah, he started with us in April. He is here for the whole Mayhem Festival tour, and we’re going back out in the fall and, it looks like he is going to do stuff with Murderdolls and for us.

Amy: Oh that will be an amazing show. He will be tired though, everyday.

Amy: I saw his solo on Wednesday night, and it was pretty amazing.

Piggy: Yeah he is just a really talented guy and a cool guy to hang out with and we just don’t want him to go anywhere.

Amy: So you guys were like, “Just bring your band and you can play drums all night for 2 bands.”

Amy: What’s been your most fulfilling career moment?

Piggy: You know, there have been a lot of them. I have been a pretty fortunate guy. I haven’t really figured it out. I don’t know yet if it is just some kind of universal karma or what, but everything in my life that I have celebrated and everything I’ve been really passionate about has been able to happen. I have had the opportunity to work with so many people that influenced me. In that sense, I have kind of lived the charmed life and it’s not over yet.

Amy: Yeah you have a long way to go, you’re young.

Piggy: And there are some pretty amazing moments. Alice Cooper was the reason I’m here in the first place, and the last several years now, really helping him out has been fun. We did his merchandising, album designs and I wrote a Halloween song with him last year. We produced it together and it came out as a Halloween single. I directed three videos for him which we made a little mini video out of. It has been amazing. He gave me so much, and now being older and him becoming a friend, we make songs together, videos together, and art together. We have gone on tours together. The weird thing is that when you are 14 years old, standing there watching a show, you go, “That is what I want to do.” You don’t really expect it to come back around like that, but it has. So if I had to pick one thing, it would probably be that right now.

Amy: I know you like movies, and I’m sure you have a lot of time on the road to watch movies, what has been your favorite movie to watch lately?

Piggy: I bring movies on the road. I like to bring stuff that I haven’t seen because I have time to watch it. I also bring things that I have seen a million times that I can fall asleep to. I can’t fall asleep anywhere unless the television is on. Even at home I will put the TV on and put the timer on and just fall asleep to it.  If it’s TV programs, it has to be something that I am familiar with. I even watch Rosanne and Three’s Company because it is something familiar to me. If it’s something new, I’ll get into it and stay up really late. Up until this tour, the only thing I could fall asleep to was “The Big Labowski.”

Piggy: I have to, I will watch it every single night, and I will always fall asleep at the same part.

Amy: Is that good for the girls?

Piggy: What girls? There are no girls.

Amy: I saw a movie last year that has become like my favorite movie, “Sunshine Cleaning. ” Have you ever seen that with Emily Blunt?

Amy: That is like one of my favorite movies. I have watched it probably three times this year and there is just something about it. It’s like funny, but in a bad way.

Amy: Any other movie suggestions?

Piggy D: I have some on a rotation that I have seen a hundred times like “American Splendor”, “Horror Hotel”, and “Black Sunday.”

Amy: Well last question is, do you have any memorable moments from Cincinnati this week that you want to tell us about?

Piggy: Memorable moments from Cincinnati? Let’s see. I remember sitting in a tent when we were signing autographs for everybody, and when that rain came in, I felt so bad because there were girls out there that had done their hair and makeup before they left the house and by the time they got up to the front of the line, it was over. I was like, “Yeah you guys look pretty, but it looks like you lost a fight.”

Amy: It was so humid. I don’t know how you get on stage with that big fur coat.

Piggy: Yeah I have a lot of costumes. Yeah after we walked out after the first song, I just saw the people that had been rained on and it was hot, and they were drunk, and it was just, you know, like, “I am so sorry.” 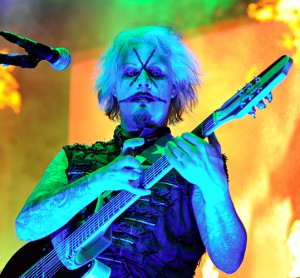 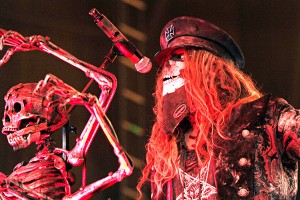 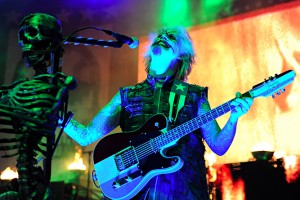