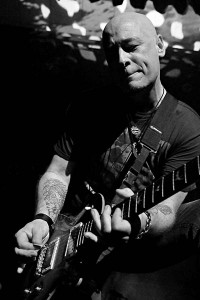 Train is playing this weekend in Louisville at the HullabaLUH festival and will be in Cincinnati opening up for John Mayer Tuesday at Riverbend Music Center. The band currently comprises a core trio of Patrick Monahan (lead vocalist), Jimmy Stafford (guitar) and Scott Underwood (drummer).

The Grammy-winning trio re-united and released their latest album, Save Me San Francisco in 2009. The first single from the album, “Hey, Soul Sister” became the band’s most successful single in their career, charting in the top three on the Billboard Hot 100 and reaching the top ten in several other countries all over the world.

We caught up with Jimmy Stafford to talk about the tour and about the recording of Save Me San Francisco.

Amy: How has the tour been going so far on the road with John Mayer?

Jimmy: It is grueling. We have never been so busy, but it is AWESOME to be this busy. We took a few years off and it is so nice to have come back with the biggest record and the biggest songs of our career and have people like you still want to talk to us. We approciate it more than ever. We have a new outlook on things now and are having more fun. To be honest we had lost some of that. We had kind of taken things for granted during the break. To come back with such a big success, it makes it so much more enjoyable and fun.

Amy: I saw you in 1998 when you guys were fairly new and I am happy you are back. The fans seem to be really embracing it.

Jimmy: All the old fans stuck around which is amazing. That is actually what the song “If It’s Love” is about, our newest single. It is a thank you to our fans. We have a whole new generation of fans with “Hey Soul Sister.” There are young kids who are fans. There is everyone from 5 year olds to 70 year olds at the shows.

Amy: My favorite song is “Save Me San Francisco” I am hoping that it is the next single.

Amy: How was it last night to come face to face with your twin Howie Mandel?

Jimmy: We actually taped it two nights ago in LA because we had a show in NY last night with John Mayer. While I was on stage performing in NY in front of 15,000 people, I was also on TV with Howie at the same time. That show is probably going to make me a more recognizable person. The band is bigger than we have ever been and we are getting recognized, but the way my facebook and twitter has blown up with photos of he and I together has been crazy today.

Amy: I saw the photos this morning on Facebook and it is amazing how much you look alike. Is that the first time you have met him in person?

Jimmy: Yes it is. We knew of each other and 50% of the time people ask me if I am Howie and he said he gets it every day that someone asks him if he is the Train guitarist. I told him I was glad to see it wasn’t just me. He is a great funny guy.

Amy: It’s good that it goes both ways.

Jimmy: If you look at him closely in that photo. He has a much bigger head than I do. 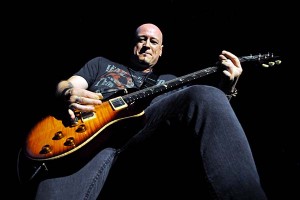 Amy: I know that you recorded some of the recent album in Europe. Why did you choose that location?

Jimmy: Half of the album was done in London with Martin Terefe. He had a great studio there. He had worked with Jason Mraz, KT Tunstall and James Morrison. We thought he would give us an organic sound and that is what we were trying to get back to. He had this great studio in London. We like recording away from our friends and family. We never record at home. It is too distracting. At the end of the day when you know that your kids are home or someone’s wife wants you to come home for dinner it takes you out of the moment and work mode. We try to record away from home and focus and work long days to get it done. This time we went really far from home to London. We recorded half in London and finished the album in LA and San Francisco.

Amy: I was just curious about why there since it was so far away and there are great studios in the US?

Jimmy: The producer sent us pictures of the studio and it was amazing. A lot of recording studios in America are really enclosed and are like working caves for a reason, so you don’t know what time it is. This way you can work at any time of the day.  His studio was in this big old building in London with windows all around. It was really low key. We had the baclony windows open all day and sat around and recorded on couches with sunlight. It was a very pleasant atmosphere to work in.

Amy: The album shows it and it is amazing.

Amy: I know that you are a Dad. Does your daughter ever join you on tour?

Jimmy: As a matter of fact when we were in Cincinnati a few months ago she was with me on tour that week. I think we had a day off in Cincinnati and we went the aquarium and some stuff on the Kentucky side since we were playing in Covington.

Amy: Is there anyone that you want to see at HullabalOU while you are in Louisville this weekend?

Jimmy: We fly into Louisville on Friday morning and play our show and then we have to head to Scranton, PA on our bus overnight for a show. I would like to catch the Doobie Brothers who play after us, but I am not sure if we will have time. We do a Doobie Brothers bit on the song, “I Got You” on the new album. A few of them may join us on stage today at the show which would be amazing.