Pepper is a rock band originally from Kona, Hawaii. They play a mix of reggae and rock. Pepper began in 1996 when singer/guitarist Kaleo Wassman joined forces with bassist/singer Bret Bollinger and drummer Yesod Williams. Pepper released an album in July 2008, entitled “Pink Crustaceans and Good Vibrations” on their own label, Law Records. They will be releasing their new self-titled album, “Pepper” later this year.

Pepper last visited the Cincinnati as part of the line-up of the Jägermeister Music Tour with Pennywise and Authority Zero in Spring 2009.They are currently touring in the USA this summer from June 26 to July 25 as part of 311’s Unity Tour 2010.

I caught up with the trio backstage at their show at Riverbend in Cincinnati Saturday, June 26, 2010 for a lively interview to discuss their tour and their upcoming album release. It is hard to distinguish between fact and fiction with these guys, but you can be the judge. 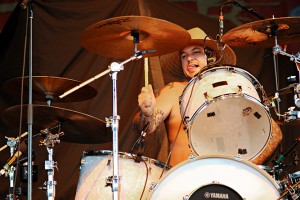 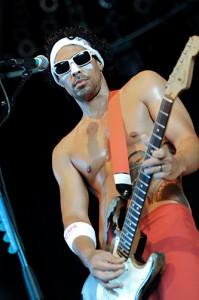 Pepper holds a special place in my heart since they were the first band to let me photograph them as a freelance photographer without working for a publication when I was getting started. As I tried to take a candid photo of them when our interview was finished, they decided it would be funnier to pretend to do CPR on me in their lifeguard outfits to “save my life.”  It was a hard sell but I eventually got on the ground for the shot that is now their Facebook profile photo.