Great Big Planes is a new Indie band on the scene from Tom Rivers, NJ. The band played their first show last Sept, 2009. Their self-titled album is currently available and features the song “Lost One.”

I caught up with the band after their set at Bamboozle on their bus to talk about their experiences on their first national tour.

Amy: You recently came back from Vegas, any crazy stories out there?

Chad: Why don’t you take this one since you were the big winner?

Josh: I won a little bit of money so we had a party at the Hard Rock in a villa.

Amy: With the money?

Josh: No, we were with all the bands from the tour. It was fun for everyone to get together.

Amy: It doesn’t sound that crazy?

Chad: It was crazy. We had Playmates there. We had a poolside cabana. It was like a Hangover suite.

Amy: Anytime playmates are involved it is a good time. 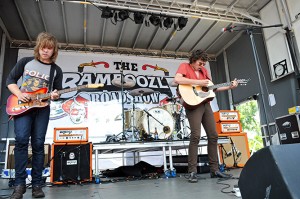 Amy: Who is your dream band to tour with?

Patrick: All of us probably have the same answer. I guess Radiohead is a big one for all of us.

Chad: I like Billy Joel a lot. It is not the same genre but I like him a lot.

Amy: What is your favorite Indie Band?

Amy: I like the song “Lost One.” What is the story behind it? Where did it come from?

Josh: I was kind of going through a transition phase in my life. I didn’t know where I was headed. I was coming out of a tumultuous relationship. It is about letting go and trying to find a place to call home.

Josh: It is not one of my own. It is “High and Dry” by Radiohead. 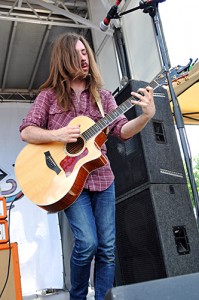 Amy: You guys just got started last year. What is the biggest thing that has changed in your life since you started out?

Patrick: The bus really. We have never had this luxury before.

Chad: This is our first tour and going National.

Josh: It is the first time we have toured with bands outside our scene. Hanson has been on part of the tour and they have been great. People automatically only think of them as “MmmBop,” but their new album is out and it is awesome. You should check it out. They have changed so much and are super talented.

Amy: Finish the sentence, I can’t go to sleep unless I’ve…

Chad: I watch Sports Center and make sure I know the scores of my favorite teams.

Patrick: I have to take off my socks before going to bed and sleep barefoot.

Josh: Not naked, just no socks?

Patrick: No, not naked just barefoot.

Josh: I can’t go to sleep unless I’ve shot the air assault gun outside. Last night we were shooting Third Eye Blind. 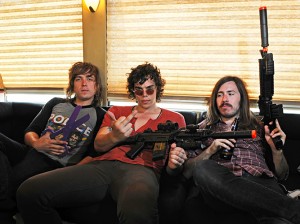