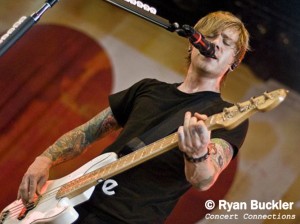 Boys Like Girls is a pop punk band from Andover, Massachusetts who gained mainstream recognition when they released their self-titled debut album Boys Like Girls. The group was formed in the final months of 2005, when vocalist Martin Johnson wrote a handful of songs he wanted to record. He recruited bassist Bryan Donahue and drummer John Keefe. Keefe brought along lead guitarist Paul DiGiovanni.

Boys Like Girls officially released their second album, Love Drunk, on September 8, 2009 and has been touring all year to support it. “Two Is Better Than One,” featuring female country singer Taylor Swift was released off Love Drunk as the fourth single. Before performing in Cincinnati, the band and local radio had a contest where the winner from a local high school was chosen to sing Taylor Swift’s part in “Two Is Better Than One” live onstage at Riverbend with the band during Bamboozle.

I caught up with John and Bryan before their set at Bamboozle to discuss the tour and their recent trip performing on the Miss USA pageant.

Amy: How has it been on the tour so far?

John: We have been having a great time with a bunch friends hanging out and playing music all day. Good times to start the summer.

Bryan: Every day is like the 4th of July. Lots of grilling and basketball every day and hanging with friends.

Amy: What has been your biggest life change since you had your big hits?

John: Just being on the road non-stop is the biggest change. It is weird when we go home.

Bryan: When we go home it is awkward and it is hard to get into a routine. Doing laundry and grocery shopping is weird.

Amy: What is the story behind the song, “The Great Escape?”

John: It is a story about getting out of high school and going to pursue other things. 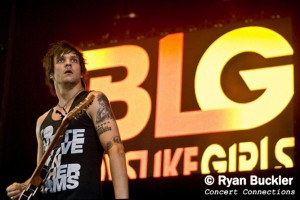 John: It changes all the time. Playing a hit song like starting the set with “Love Drunk” is awesome.

Amy: It is the best feeling when they sing along, right?

John: Yes, it is so awesome.

Amy: You recently performed on the Miss USA pageant. What was that experience like?

John: It was a dream, come true.

Bryan: Like kids in a candy store with the most beautiful women in the United States. We showed up the day before for rehearsal and they actually had to separate us from the girls. We were introducing ourselves to be polite and someone came up and told us to leave them alone. We were bummed.

Amy: What is the bigegst pet peave on the road?

John: We all pretty much get along, maybe someone being late and we are waiting when we need to be somewhere.

Bryan: A messy bus is bad, four, five, six guys with all their crap everywhere. It gets bad and we have to clean it up. It gets clausterphobic. A clear house means a clear mind.

Amy: What has been your most memorable moment so far as a band?

Bryan: Nothing that trumps anything else. We’ll always remember the first time we hear our songs on the radio. We were all together when we heard “The Great Escape” on the radio. Martin was driving the van and we started screaming .We thought he was going to flip the van. Basically, anything we do together as a band is memorable.

Amy: Who were your biggest musical influences?

John: It is across the board. Aerosmith and Nirvana were big influences.

Bryan: My dad was a bass player and he turned me on to a lot of really great music. I had to use his equipment when I started at 12 years old since I couldn’t buy my own stuff.  My dad walked me through how to fix a string. I thought I had broke the bass and he calmed me down and said it was just a string and walked me through it. He bought me a lot of great music and was my biggest influence.

Amy: I recently saw a band called “The Trouble with Boys” and they are really young kids who rock out. I am always amazed at how supportive their families are with their music. I guess your parents were pretty supportive along the way.

Bryan: In the beginning they weren’t, but they are now. It took awhile for them to understand that I wasn’t going to college and that I was going to pursue music. They are very proud now. Parents are usually proud no matter what their kids do though.

Amy: Who are your favorite Indie bands?

John: Great Big Planes and Cady Groves are on the tour and I have been checking them out.

Bryan: I was just handed a CD that is pretty cool called, “Colors.” I feel like it is summer and I should have more new music.

Amy: What do you like to listen to in the summer?

Special thanks to Ryan Buckler for providing photos to supplement this coverage.