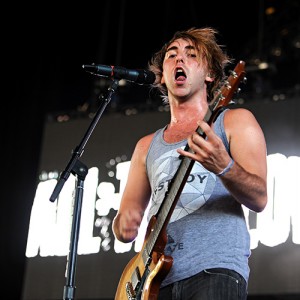 All Time Low is an American pop punk band from Baltimore, Maryland, formed in 2003. The band consists of vocalist and rhythm guitarist Alexander Gaskarth, lead guitarist and backing vocalist Jack Barakat, bassist and back vocalist Zachary Merrick, and drummer Rian Dawson. Formed while still in high school, All Time Low started out covering pop punk bands such as Green Day and Blink-182.

In late March 2010, All Time Low began recording their fourth studio album with producers John Fields and Matt Squire. It will be the band’s first album released through Interscope Records.

I caught up with Alex after Bamboozle to discuss the Bamboozle tour controversy this summer and their upcoming album.

Amy: I have read that the band was named for a New Found Glory song, “Head on Collision.” Can you tell me the story about it?

Alex: It was right when we were starting the band, we had a list of terrible, terrible band names and we didn’t pick any of them. We ended up taking a line from the song that caught our ear and went with it.

Amy: I recently spent some time photographing them and they were great guys.

Alex: Yeah they are good dudes.

Amy: You have started recording your next album. When can we expect it?

Alex: As of right now we are shooting for an early 2011 release. We are about halfway finished with it and we need to figure out what to call it and go through all the steps to get it out.

Amy: Can you talk about any of the new songs that you are excited about?

Alex: We are excited about them all and it doesn’t make sense to go into specifics because it is too early.

Amy: You have recently had some controversy with Six Flags on this tour. Are you past it?

Alex: We’re past it. We had an issue there and Six Flags security didn’t handle a situation well. They didn’t like the fact that I voiced my opinion about it and have asked us never to come back, which is fine with me since I never want to step foot in there again.

Amy: Is it that one or all Six Flags?

Amy: I’ve seen you a couple times and I see all these young girls at your show and they are crazy about you guys. A lot of them are really young, how do you stay out of trouble with the fans?

Alex: What do you mean?

Amy: Well, they are obviously not 18.

Alex: We are not really in the business of having relations with our fans so I am not sure it is a problem.

Amy: I photograph bands all the time and people usually think rap concerts are dangerous, but I swear that your shows have the most dangerous fans with the screaming little girls.

Alex: They are violent little kids and they are our fans. We love them.

Amy: Who would be your dream band to go on tour with?

Alex: I would love to tour with Weezer and Blink 182 would also be an obvious choice.

Amy: What has been your craziest Bamboozle tour story? 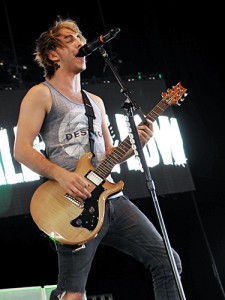 Alex: A negative one would be the Six Flags incident. We also got pretty crazy on Jack’s birthday and I destroyed several TV’s in the hotel. I lived the life of a rock star for a night which was a lot of fun.

Amy: What did Jack do?

Alex: Jack was right alongside with me. It was his birthday and everyone was together.

Amy: Who would be your favorite Indie band?

Amy: Fill in the blank. I can’t go to sleep unless I …

Amy: What is up next for the band?

Alex: We are going back to California to finish the album and then we are going overseas to do some festivals in Japan and do a show in Malaysia. We’ll be back in the US in the fall for a tour.