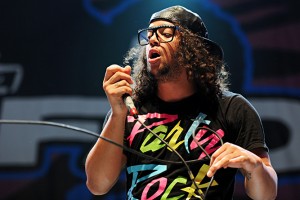 LMFAO is a Grammy-nominated electro-hip hop group from Los Angeles, California that consists of DJ/rappers Redfoo (Stefan Gordy) and Sky Blu (Skyler Gordy). Both artists are related to Berry Gordy; Redfoo is the son of the Motown Records founder and Sky Blu is his nephew.

Their first single was titled “I’m in Miami Bitch” which peaked at #51 on the Billboard Hot 100. LMFAO also provided the opening theme to Kourtney and Khloé Take Miami and Jersey Shore. They last visited Ohio on tour with the Black Eyed Peas in early 2010.

I sat down with the two of them for an interview backstage at Bamboozle to discuss the tour and the upcoming album.

Amy: You guys grew up really close to the recording industry. Did it give you an idea what to expect in the business?

RF: You know maybe on the business side, but not as far as touring. When we grew up our family was out of the business. The touring is new with things like being on the bus. We have adjusted really well. Now the bus is now like our home.

Amy: What is your favorite track to perform live?

RF: The songs are like tools that will help you out in any situation.

Amy: They make me smile.

RF: When you are at a party you have to play Shots to get the party started. Toward the end of the party you may want to say something nice to a girl so you may play, “Scream My Name.”

RF: After shots you would play, “Get Crazy.” They are like tools. So when we perform and we want to talk to the sexy ladies we sing “Scream My Name.” 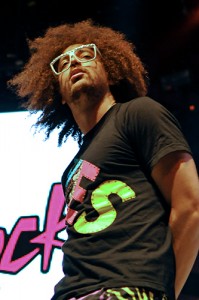 SB: Will got stuck one time up in the air during their performance.

Amy: Did you guys rescue him?

SB: I was going to, but I didn’t want to put my drink down. The stage hands took care of him.

Amy: You are working on a new album. When can we expect it?

RF: The new album is in the works. We are finally getting some momentum on it. Hopefully it will be out around November.

Amy: Do you write your own stuff?

RF: Yes we have a lot of concepts that we are working on. It is a process to lay out the tracks. We have a studio on the bus and one at our house now in LA.

Amy: You guys live together- roomies?

RF: Yes, we actually have a lot of houses and a lot of girlfriends.

Amy: What are your party rules?

RF: You have to bring some Nachos.

SB: Nachos are girls that are “Not Yours,” not your ex, not your current girl, they are like pot luck. You have to take a shot when you walk in. You have to have a TBR- Take Back Room. It can be a bathroom but that can cause problems. These are the party rules. 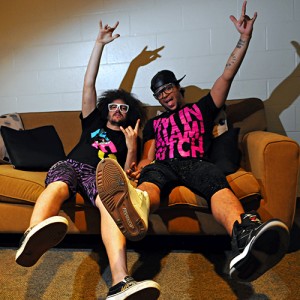 Amy: Who were your musical influences?

Amy: What do you wish you knew five years ago that you know now?

SB: I wish I knew to put more stock into Apple.

RF: I wish I had read this book Going Against the Grain. It talks about how grains are not good for you. It is a revolutionary book. It explains how they are not edible in nature. I just stopped eating grains and lost 25 lbs in a month.

RF: No, you can have carbs like fruit and potatoes, just no grains like bread, pasta or anything made with corn. We even switched alcohol. Ciroc has grapes and Petron is a plant so they are approved.

SB: It is funny because in “Shots” those were the two we named. 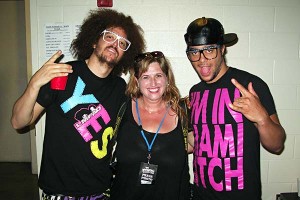