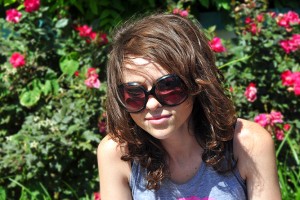 Cady Groves is a 20 year old Oklahoma native who is touring with the Bamboozle Roadshow this summer. She is a multi-talented singer songwriter who has recently signed to RCA records.

I caught up with Cady after her set to discuss her current EP, The Life of a Pirate and what is up next for her as she forms her full band and begins recording her next album.

Amy: You are the only girl on the tour. How has that been going?

Amy: When you date, do you prefer to date musicians?

Cady: I try to be professional. I am not promiscuous at all.  I was in a relationship with a musician before all of this happened, but we are just friends now. I could date a fan. I could date anyone. I just really need to have a connection with the person. I really like to be in love though.

Amy: You write all your own music about personal experiences. What is your writing process?

Cady: I have a really weird writing process. I have an entire melody in my head with no music to it before I hum it to a guitar. I can hear it in my head. I usually sing all the time into a recorder. I write songs all the time. I actually made up one today.

Amy: What is it about?

Cady: It is about my loyalty to people and how it sometimes gets me hurt.

Amy: You were recently at SxSW. Do you have any crazy stories from there?

Cady: I got pretty crazy one night when I shouldn’t have. I am usually a stay at home person, but I had fun one night. It was a good night. I think some guy wrote I love Cady Groves on his chest but that is not that crazy.

Amy: What is up next for you?

Cady: We have 2 weeks left in the tour and then I have 3 weeks off after that when I will be forming my full band. We will practice and meet lots of producers. Right before this tour I signed with RCA so I haven’t had a chance to hang out with them and get everything started. I will go to NYC, LA and Nashville to get started with them. After that I will be going back out on tour with Stereo Skyline on the “Stuck on Repeat” tour.

Amy: Will you be coming back through the area?

Cady: Yes I think we will.

Amy: I like the album title. Is there a story behind the pirate?

Cady: It kind of goes along with my life experiences. I have been on my own for awhile. I had a really bad habit of moving around. It is a bad habit that I am trying to break. I would live somewhere for a few months like in my car or on someone’s couch. I would get two jobs and try to make myself be complacent, but once I was, I would just leave. I would get up in the middle of the night and just drive 24 hours and start over. When you think about it, it is a horrible thing to do. It was making life a lot harder and more complicated than it needed to be. It was the life of a pirate. I kept leaving and living in my car. Just moving around.

Amy: How long ago was it?

Cady: It was a couple years ago.

Amy: So you were right out of high school?

Cady: No, I graduated high school super early when I was 16 and went to college.

Amy: Where did you go to college?

Cady: I actually went to culinary school in Vegas. I love it and I think I want to move back there.

Cady: I want to collaborate with Alanis Morissette. I want my album with RCA to be half as good as “Jagged Little Pill.” I was the youngest of 7 kids. I was really shy and was 4 years old when my mom bought the CD the day it came out. We would ride in this huge van. I was always quiet as a kid. I had long curly hair and I would hide under the seat of the van and then I would just come out from under a chair and sing the whole album. My Mom thought it was the funniest thing. I still will pop in the CD and sing it at the top of my lungs.