Violent Soho is a band from Brisbane, Queensland. The band formed in 2004. They are a quartet, with Luke Boerdam on guitar/vocals, James Tidswell on guitar/vocals, Luke Henery on bass and Michael Richards on drums.

On March 9, 2010, Violent Soho released a second, self-titled album on the Ecstatic Peace! Label. The album produced the single “Jesus Stole My Girlfriend.”

I interviewed the whole band backstage at ROTR after their set. These Aussies were by far my funnest interview of the day.

VS: We are huge Cincinnati Reds fans. We have the magnet on our bus. We have played at the Southgate House and love it there.

Amy: What do you miss most when you are on the road?

VS: Our wives and girlfriends. No, the meat pies. F the girls.

Amy: What is the backstory behind “Jesus Stole my Girlfriend?”

Luke: I was engaged to be married to Jame’s sister and we broke up because she started going to church and I wanted to do more secular activities.

Amy: That is kind of a sad story. I didn’t expect it.

James: He made light of a serious situation with great lyrics.

Amy: Who are you most excited to see here at ROTR?

VS: Helmet and Rise Against. The original line up of Helmet is from our city in Australia and now there are no Australian members left in the band. Hopefully that won’t happen to us.

Amy: What is your craziest tour story?

James: I guess the craziest thing was when I tried to smoke a cigarette out of my asshole. I decided that if I could suck air in through my ass I would take a drag and then blow it out.

Amy: How did that work for you?

James: It actually lit up, but it didn’t really work. I am not a Taiwanese hooker. After being to the Philippines and seeing girls smoke cigarettes with their vaginas I thought I would give it a try.

Amy: What is your favorite place to tour?

VS: America. I will say California due to the amount of weed we are donated at every show. Texas is also good because of the chicken wings. We do love the Southgate House though in Newport. KY. We spend so much time in middle America it is nice to get to the coast from time to time.

Amy: Who writes your songs, what is the process?

James: Luke writes them all.

Amy: From his bad girlfriend experiences?

Luke: Yes I write everything.

James: Luke puts together 3-4 chords and then we try to sing and jam it out in the garage. We are sort of like a backing track for Luke. We don’t really know each other. Luke and his parents just rented us for him so he can be famous and date Lindsey Lohan.

Amy: If you could have a song in guitar hero what would it be?

VS: “Muscle Junkie” or “Love is a Heavy Word. ” As soon as we get a song on guitar hero we will just play it all day and never play for real again. We may just walk on stage with Playstations and play guitar hero. That is the future. We could have an Ipad in the guitar.

Amy: We should call Apple right now with that idea.

Amy: If you had a message to your fans what would it be?

VS: Thank you for being a fan. Smoke weed everyday. 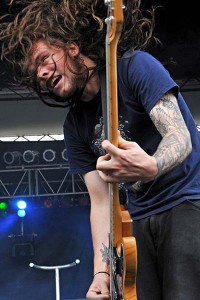 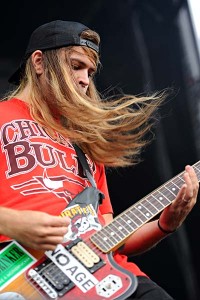