Airbourne is an Australian hard rock band originating from Warrnambool, Victoria, Australia, where they gained a steady following with their hard rock sound. A big part of Airbourne’s growing success is the exposure they have gained in other media – most notably, video games. The band consists of Joel O’Keeffe – Lead vocals/Lead guitar, Ryan O’Keeffe â€“Drums, David Roads – Rhythm guitar, Backup vocals and Justin Street – Bass guitar.

The bandâ€™s new album, called No Guts. No Glory was released in March 2010.

At ROTR, this band would get the award for most onstage energy. Their lead singer surfed through the crowd while playing the guitar and actually kept playing while being lifted onto a roadieâ€™s shoulders. It was insane and got the crowd excited to see what they would do next.

I sat down with Dave Roads at ROTR to discuss the bandâ€™s upcoming tours and their recent success.Â

Amy: What was the reason behind the title â€śNo Guts, No Glory?â€ť

Dave: No Guts No Glory was a title we always liked because it has a good ring to it.Â We felt it was good for the second album.

Amy: You were just in Nashville. What was your favorite experience about playing there?

Dave: That day we were in Nashville, our bus driver took us to his fatherâ€™s ranch in TN. He got out his shotguns, rifles and semi-automatic weapons and we had a day of shooting which was really fun. I always love going to Nashville to play wth the crowds there.

Amy: What is your scariest tour memory?

Dave: Sometimes it can get a little bit hairy on the road at night time. Some of the roads can be dodgy while we are sleeping and can wake you up and scare you a bit.

Amy: Who would be your personal dream to collaborate with?

Dave: Certain producers like Bob Rock would be great. We nearly worked with him on the second album but it fell through.

Amy: How did you get hooked up with the video game industry?

Dave: Steve, who we have a good relationship with at EA games, discovered us as the music coordinator there. He was a fan of the band and really got us started. We are on Madden, the best selling game in the states, and about 10 or 11 other games. It is great for establishing the name Airbourne out there. I donâ€™t play guitar hero. I think that if you play real guitar, you are not coordinated enough. The games are a great way to get young kids to hear our music and support rock-n-roll.

Amy: I was talking to your tour manager about your energy and I was telling him that I was amazed that you guys did not pass out on stage in the heat. He said you guys are from Australia and that you are used to being hot. Is that true?

Dave: I donâ€™t think you can ever be used to the heat. At home in Australia, we usually go inside an air conditioned pub and have a cold beer. We actually have had a lot of close encounters to passing out on the stage. It is mainly from being too hung over, dehydrated and rocking out. It can be dangerous.

Amy: What is next for the band?

Dave: After this we are going back to the bus to have a cold beer. This month we are finishing touring with Bullet for my Valentine. We then head to the UK for the summer festivals. In August ,we tour Canada and then we jump on the Uproar festival in the fall back in the US.

Amy: What are you favorite venues to play in the US?

Dave: I like the Fillmore venues. We played it in San Francisco and we are playing in Detroit soon. I am pretty diplomatic and like it all. 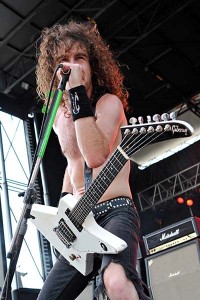 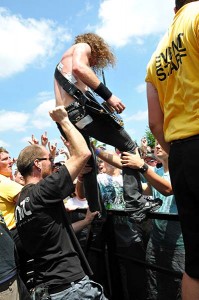 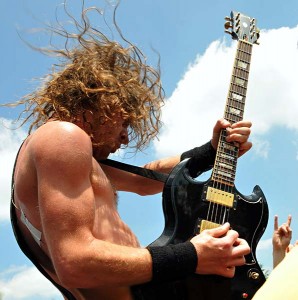