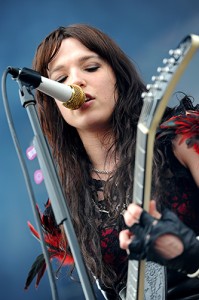 Halestorm is a hard rock band from Red Lion, Pennsylvania. The group is currently signed with Atlantic Records. Halestorm has been actively writing and performing original music since 1998, when brother and sister, Arejay and Lzzy, were, respectively, 10 and 13 years old. Their debut album was released on April 28, 2009. The song “I Get Off” serves as the album’s lead single and has gained heavy radio play. Their newest single is “It’s Not You” and the music video for the song was released in late November 2009.

I caught the band’s entire set at Rock on the Range and they have quickly become one of my favorite new bands with Lzzy Hale, the ultimate rocker chick leading the way. I sat down for a quick interview with Arejay backstage before their set to talk about their current tour.

Amy: Is this your first time at Rock on the Range?

Arejay: No, we were here last year and played the Jagermeister stage. This year we are on the Kicker Stage so we are working our way up the ladder. Maybe the next time we will get the main stage.

Amy: When you are out on tour what do you miss the most about home?

Arejay: The funny thing about this band is that my sister is the lead singer Lzzy. Our parents tour with us. My Mom is our tour manager and our Dad is the bus driver/stage tech. We bring home on the road.

The cool thing is that our home is our RV. When we go home to Pennsylvania, we actually sit in the RV and hang out because our house feels weird and like a hotel. 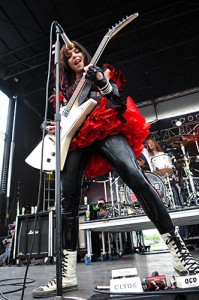 Amy: What would be your dream collaboration?

Arejay: We just got to hang out with Jerry Cantrell from Alice in Chains. Alice in Chains is one of my favorite bands of all time. Another one would be Stone temple Pilots. I also recently got to co-write with Corey Taylor from Slipknot. I met him and we became fast friends. We will be touring with them in the fall and it is going to be awesome.

Arejay: Thank you guys for letting us know do what we do. We’ve had so many great times. We willl be in Dayton at McGuffy’s House of Rock in July, so come and check it out. Everyone in Cincinnati is always receptive and keeps coming out to our shows and we appreciate it so much. You guys are out of your minds. Keep Reading CityBeat!

Amy: If you could get a song on Rockband or Guitar Hero, what would it be?

Arejay: “Dirty Work.” It is a rocker and everyone starts jumping in the crowd when we play it. You can play Tap Tap or Dance Dance Revolution with it as well. I would pick that one. 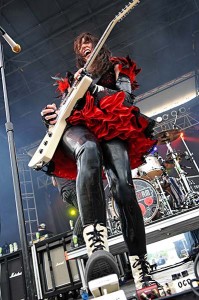 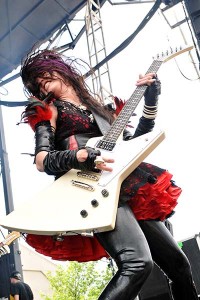