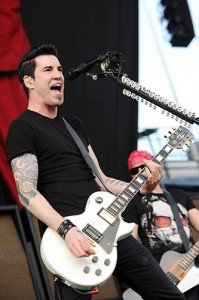 Theory of a Deadman, often known as TOAD, is a Canadian rock band from Delta, British Columbia, formed in 2001. The band is currently signed to Roadrunner Records as well as Island Records.

On April 1, 2008, Theory of a Deadman released their third album, Scars & Souvenirs, from which they released eight singles, “So Happy”, “By the Way”, “Little Smirk”, “Bad Girlfriend”, “All or Nothing”, “Hate My Life”, “Not Meant to Be” and “Wait for Me”. Â â€śBad Girlfriendâ€ť was a number one single for the band. The band is planning to take time off later this summer to work on a new album.

I talked to Tyler Connolly, lead singer for the band, backstage at Rock on the Range to discuss his advice column and some of his craziest tour stories.

Amy: I know you have this column called Ask Tyler? Have you ever given advice that screwed somebody up?

Tyler: Not that I know of, but I hope so. There should be a disclaimer that says if you listened to Tyler and it ruined your life then it is your own fault.

Amy: How did the column start?

Amy: Do you answer them all yourself?

Tyler: People donâ€™t believe me, but I do answer every one of them

Amy: I read that you visualize when your write songs. Can you walk me through your writing process?

Tyler: Iâ€™ve heard some lyrics from bands that are just terrible. Bad Girlfriend has bad lyrics but you can visualize it. I believe that the most important thing in a song is the lyrics. I think fans can tell when something is made up and just trying to rhyme with no meaning. When I write, I want people to be able to picture the lyrics in their head like a music video. It is important for people to get into the songs.

Amy: You guys are from Canada and I know you recently played at the Olympics.What was your Olympic moment?

Tyler: Winning an Olympic gold metal for Luge. The curling team captain was a cougar and hot. The snowboard chicks were pretty hot as well. Playing the show was cool, people from all over the world waving their flags. That was very cool and fun.

Amy: I know that you are married. What is your secret to a good marriage?

Amy: How do you turn bad girlfriend into a good marriage?

Tyler: You donâ€™t. Itâ€™s tough and you just do what you can.

Amy: Do you have any new music on the horizon?

Tyler: Weâ€™re working on new stuff right now. Fall/winter we are going back in the studio. We have canceled stuff after August to work on it.

Amy: I saw you had been on tour with everyone including Motley Crue, Shinedown, etc. What is your craziest tour story?

Tyler: We watched Tommy Lee burn his hand off with fireworks, but that wasnâ€™t that crazy. We had this one girl that came on our bus with a bullet hole painted on her forehead. One of our roadies was trying to sleep with her. She was on drugs and wouldnâ€™t get off the bus. She thought I was a lawyer and tried to attack me on my bus. We had to have someone drag her off the bus and then she went and laid down under our bus and would not go away.

Amy: So you now ban girls from the bus or just no bullet-hole girls?

Check them out at : http://www.theoryofadeadman.com/

For advice from Tyler checkout: http://www.theoryofadeadman.com/qandas 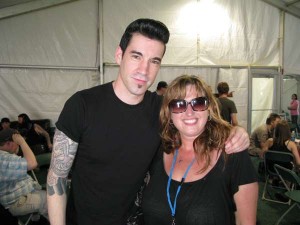