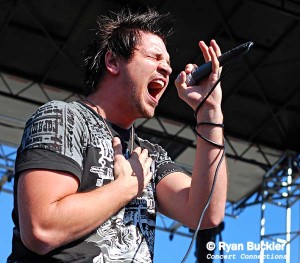 Adelitas Way is a hard rock band from Las Vegas, Nevada that broke into mainstream in 2009 with their song “Invincible”, which is the official theme song for WWE Superstars. The band was formed in 2005 in by lead vocalist Rick DeJesus, lead guitarist Chris Iorio and drummer Trevor Stafford. The second single off the Adelitas Way album, “Last Stand” was released on February 2, 2010 and they are currently on tour all summer to support their record.

I caught up with Rick DeJesus backstage at Rock on the Range to talk about the tour and discuss his writing process.

Amy: Who are you most excited to see here today?

Rick: I am the boring one of the bunch. I am the old married one in the group, so I don’t have too many exciting stories. The other guys probably have some by now.

Rick: To me it does.

Amy: You have been out on the road constantly since the release of your album last year.

Rick: Yes we are out on the road with Puddle of Mudd right now.

Amy: When you are on the road, what do you miss the most about home?

Rick: I miss my wife and my dogs. I am from Las Vegas. I miss my city. I miss my house. I miss my favorite restaurants. I wouldn’t trade this for the world though. I love what I do and playing music on the road. I love playing in front of the amazing fans. I wouldn’t trade it for anything. We have had a dream year. We have been out touring with Shinedown, Puddle of Mudd, Papa Roach, Chevelle, Three Days Grace, and Sick Puppies just to name a few. It has been a dream year.

Amy: It seems like a fairy tale to live in Vegas.

Rick: Yes it is. I miss it. I love it. Best restaurants, Best clubs, Best people.

Amy: What is your favorite place to play when you are touring?

Rick: I always love San Diego. It is beautiful there. I always love going back to Knoxville and Nashville in Tennessee as well. Atlanta is always good. Touring you see so many amazing places.

Amy: Are you originally from Vegas?

Rick: No I am from Philly. We never go back there haha.

Amy: How long have you guys been together?

Rick: This group has been together for 2.5 years. I started doing this going on 6 years ago. I started this with me writing. Writing poems. Writing stuff.

Amy: You guys have the young one, Chris in the band correct?

Rick: No he is back in Vegas. The road is not made for everyone. Some people can live in a van. We drove in from Buffalo last night and played right away. We get no sleep. For some people the lifestyle catches up with them. We leave our family, our homes, our friends and you are out on the road in a different city every night. Some people when they get out here they realize it is not for them.

Amy: If you could have a song on “Guitar Hero” or “Rock Band” what would it be?

Rick: Our new single “Last stand.” It has the guitar anthem. I like it and it is a good song.

Amy: Where are you heading next?

Rick: North Dakota. We have a long drive but we are used to it. It is nothing new to us.

Amy: How did you get started in music?

Rick: I always liked writing and loved music. When I was 18 I snuck into a bar and played a couple of my songs and the response was great. It started there and I never looked back.

Amy: Was your family supportive?

Rick: Yes they have always been supportive.

Amy: If you weren’t a rock star what would you be doing?

Rick: I would probably be working with my father working running his heating and cooling refrigeration company back in Philly.

Rick: I am nuts. I come up with stuff all the time. I’ll be sitting over here mumbling and tapping away and the songs come together.  I write from a lot of personal feelings, so how I am feeling ends up coming out in the songs.

Rick: We love you guys. We are out with Puddle of Mudd right now and Halestorm in July. Maybe a headliner tour in August, so come and check us out. We are working on a new album. Buy this one and buy the next one. Lzzy, “You are a Ninja!”

Check out Adelitas Way at: http://www.adelitaswaymusic.net/

I did not get to photograph the band myself, but my friend Ryan Buckler from Concert Connections sent me some photos from the day to supplement my coverage. Thanks Ryan! 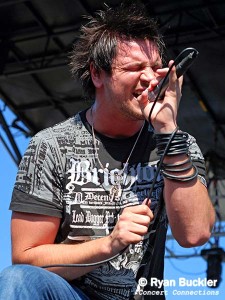 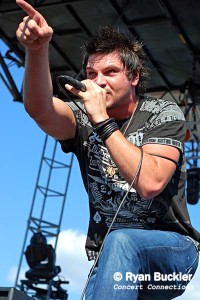