Janus is a hard rock band based out of Chicago, Illinois. They were formed in 2004 and are signed to REALID/ILG Records. Their unique sound mixes heavy rock with non-traditional rock instruments, such as auxiliary percussion, and electronic sounds. Their album “Red, Right, Return” was released last year and is getting radio play across the country with their single “Eyesore.”

I caught up with David Scotney the lead singer for the band JANUS in the back of their van at ROTR after their set.

Amy: One of the interesting things about your music is that you kind of have heavy metal music with non-rock arrangements. How do make the leap from the studio to the stage show and figure out how you are going to perform it?

David: We just tried to make the best record we possibly could. We have influences based on where we all came from individually. We took a look at radio and the industry in general and what is out there and tried to do something that sounded different. We wanted to get people thinking. It has made the road a little harder and slower for us.

We’ve seen a little hate on the road, like people saying “We’re here to see Five Finger Death Punch, why aren’t you screaming at me like Five Finger Death Punch.”  But then you meet people who say, “You got me thinking a little bit.” It is good to see people open their mind. It doesn’t always have to be dumb down beer drinking rock-n-roll just because you are in a club. People respect the fact that there is a little bit of thought behind it.

David: Yes we are literally in this van you are sitting in for 9 months per year.

David: Family, 100% the one thing we all miss. The hardest part of being on the road is missing family. No matter how much you believe in what you are doing, what you want to say and getting your art out there. There is nothing that compares to the gravity of family as a person.

David: It mostly comes down to Mike, our guitar player and myself . Mike is an amazing song writer. He comes up with ideas all the time. He understands all of the latest technology that comes out and is by far the smartest person in the band. He can track a demo with the latest technologies for percussion, bass, guitar, melodies, even vocals. He really is the heart of Janus.

Amy: What is the hardest part about being on the road?

It is disheartening to spend your time traveling and drowning in logistics. You are traveling constantly. The best part is writing the music, doing the show, and meeting the fans on the road.

Amy: What is your funniest tour story?

David: Before we got signed, we went to NY to showcase for a terrible record label and we are so happy we didn’t sign with them. We were going to play at a dive bar. There was a guy in a white range rover who we evidently cut off even though we were in the middle of nowhere. He pulled in front of us and got out of his white range rover in his suit and got a baseball bat out like he was going to hit our car and kill us. All of us got out, like 20 of us and were like “Really man?”  The guy quickly got back in his range rover, thought about his 401 K, and then drove off. It was really scary for a minute and then hilariously funny.

Amy: Who are you most looking forward to seeing at ROTR?

David: Helmet. I love Helmet. They are one of my biggest influences ever. They create harmony and emotion in the silence between chords. We played in Phoenix with them two weeks ago. They were the nicest guys and the most down to earth people. Page Hamilton is one of the most amazing artists I have ever met and an inspiration. 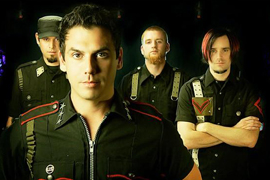