Mike Dâ€™Antonio plays bass guitar and is a founding member of the band. He sat down with me at Rock on the Range to discuss the bandâ€™s fifth self-titled album, Killswitch Engage and life on the road.Â

Amy: Who were your musical influences growing up?

Mike: All my musical influencesÂ are from growing up when I was a kid. I was really into New York, Cromags, Agnostic Front, and Madball. Hard core music shaped the way I view music and who I am today.

Amy: What is your favorite song on the new album to sing live?

Mike: The opening track â€śNever Againâ€ť is a hard rockin song and in your face which is what I gravitate toward so that is probably my favorite.

Amy: Iâ€™ve been listening to your music to prepare for ROTR and I found the music on the new album to be a little darker and more aggressive than your past work. Is there a reason? Are you guys angry?

Mike: Not so much anymore. We used to be. I just had a birthday and turned 37 and I think we are through with being angry. I donâ€™t know why it is darker. It is definitely darker, but it still has a positive message in the songs like we have had in the past. It may be because this is the first time that we have used an outside producer, Brendon Oâ€™Brien on this one. He has done work with Bruce Springsteen, Mastodon, AC/DC, Pearl Jam and others. He is not necessarily a dark producer though. Maybe it is just what we came to the table with this time.

Amy: What was your process to write this album?

Mike: Whenever we write, we all bring demos to practice and we listen and critique it. We always have one week of practice and two weeks off to work on demos. We re-work it all the time. The process is always the same. The only monkey wrench in the system was the outside producer. Usually, Adam, our guitarist produces all our stuff and we are very comfortable with that. It was our fifth album and we thought that if we ever were going to take a chance, now would be the time. I donâ€™t know if we will do it again. I really feel like we can do it on our own. No need to spend the big bucks if we donâ€™t have to.

Amy: What do you miss most when you are on the road?

Mike: Definitely my wife. I also have 2 pug puppies at home named Raisin and Potato. I desperately miss them right now. Potato just fell in the pool the other day when we took off the pool cover with all the chemicals in it. He fell right in and we had to wash him down.
Amy: I guess he can swim.

Mike: It was even more scary because we didnâ€™t see it happen. We just saw him soaking wet. It is scary. They have big heads and small legs so he definitely sank and swallowed some water.

Amy: I read that you have a background in graphic design and that you do all the artwork for the band. It is cool that you can meld two things that you love to do together.

Amy: This is a little bit timely, you guys recorded a cover of Dioâ€™s â€śHoly Diver.â€ť He is a legend and recently passed, so how much did he influence you and what are your feelings?

Mike: Even until right before he died, he was an amazing musician and he could still belt it out. A lot of old timers today cannot. He was very â€śonâ€ť every single night. I have never met him but he was supposedly a super nice guy. The world will miss him, especially the metal world. When we did the cover he graciously signed off on it and we heard he liked it. We actually got a photo from our friend who was on the Heaven and Hell tour with him that he took a himself holding a cardboard sign that said, â€śHey Killswitch, Where are my Royalties?â€ť It is actually hanging in our guitar playerâ€™s entry way to his house. So that is a really cool memory we have of him.

Amy: You have a lot of tattoos. Is there any special significance behind them?

Mike: I love Japanese work, when I was little I used to watch a TV show called Force 5 with giant robots, but many are just cover-ups for shitty tattoos that I got when I was younger.

Amy: Any message to your fans?

Mike: Apparently we have the best fans in the world. We have had some tough times with Howard and having to make up shows with Phil from All that Remains. The fans still came out to support us. We needed it desperately and it was like a giant hug that our fans gave us. We are in a great spot and we have no one to thank but them for us being here. 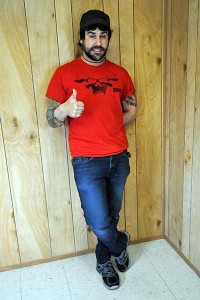 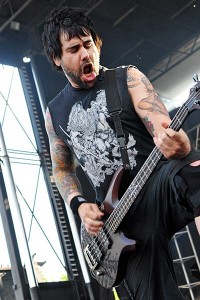 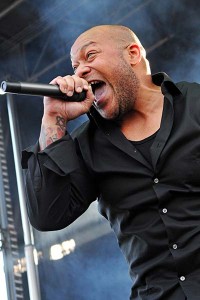 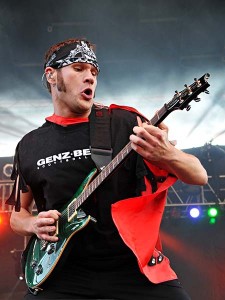