Emily West and I met backstage at the Country Throwdown tour in Cleveland. In January 2010, Emily released a duet with label mate Keith Urban titled “Blue Sky.” Emily is a singer-songwriter who appeared in the April 18th, 2010 episode of Celebrity Apprentice, as the “music make-over” target for the women’s team lead by Cyndi Lauper. Lauper won the challenge and as a result West donated 100% of the first month of iTunes sales of her song “Blue Sky” to the Stonewall Community Foundation, Laupers’ charity.

Amy: I saw you on Celebrity Apprentice a few weeks ago and this was my first exposure to Emily West. I just wanted to ask you about your experience there and how it helped you?

Emily: It really did help me. A lot of people who would never have known me were able to see me because of that show. There are a lot of cool ways to get my music out there on the internet, but myspace and twitter only go so far. To be on a national TV show was invaluable. Cindy Lauper and I are text buddies. She is hilariously funny and gives me tons of advice. Sharon Osbourne was there as well and it was amazing to work with the legends. It was a cool idea that Capital Records and my management team came up with and really got some great exposure.

Amy: I know you write a lot of your own music and songs. What is your process for that?

Emily: You know it changes. My spirit gets a little de-juiced. There are ups and downs to everyone here on the tour when you don’t feel like writing.  I don’t remember writing half my songs. I was on a quantity vs. quality kick for awhile. Everyone talks about writing that hit and what is a hit these days? You think about it too much and it is a lot of pressure where you are almost afraid to write. I cannot work like that. My mouth always say crazy things and banter. I just try to write things down on the Iphone.

I usually get with some really great writers and try to banter it out with them. I am on a singer songwriter bus with 12 egos which is awesome. We are always singing. It is freakin crazy over there and sometimes I just want to get some beauty sleep.

Amy: You are on the tour all summer. What bands are you most excited to see each night?

Emily: Every night, I try to see Ryan Bingham. I just saw his set and I am a huge fan of his. I see Jamey Johnson and Little Big Town every night. Last week I was onstage with Jamey and his band singing “Crazy.” The Grove is actually my band that I am borrowing from Jonathan Singleton and the Grove. They are all unbelievable. Every act is amazing and I basically just walk around and see everyone here and stalk them. I enjoy the camaraderie of it all.

Amy: Do you live in Nashville now?

Amy: Were you affected by the flood?

Emily: No I wasn’t. I was two blocks away. It is crazy to see with drywall, couches everywhere in the street.

Amy: I am from Clarksville and many of my friend’s businesses are gone. Things that have never flooded in 100 years are gone.

Emily: It is crazy that there is not much press coverage on it. I know there are natural disasters going on everywhere, but legendary things are ruined. Guitars are ruined. The good and positive thing about it is the people coming together and helping each other. I helped a friend of mine who was affected. It is amazing to see girls that only usually know how to do their hair are now ripping out drywall and doing repairs. Doing my hair is my only thing and I actually learned some skills.

Emily: I have always wanted to do a duet with Tom Petty. I think Jamey Johnson would also be great. I am always struggling with what Emily I want to create. Where do I want to brand myself? I love old school country. I think we should all chill out and listen to some old school depressing country. To sing with Little Big Town would be amazing since their harmonies are like smooth cashmere silk.

Amy: Message to your fans?

Emily: That is what twitter is for…I’d like thank the academy and the fans ha-ha…A lot of people go where the fame is. I do this for the music. People tend to follow what is hot so I want to thank the fans and believers who have stood by me from the beginning and supported me. 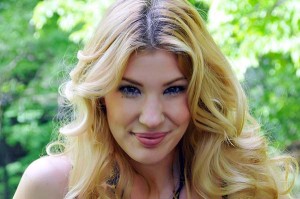 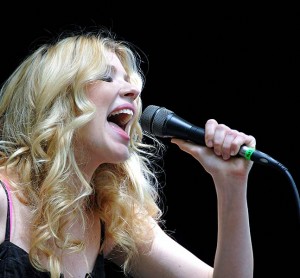 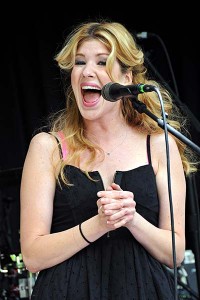