I sat down backstage at Country Throwdown with Heidi Newfield. Heidi is a country music artist who was lead singer for the group Trick Pony, alongside Keith Burns and Ira Dean from 1996 until 2006, when she left in pursuit of a solo career. Newfield has begun her solo career on Curb Records, debuting in 2008 with the single, “Johnny & June.”

Heidi was the artist that I was most excited to interview at the event so I was delighted when I ran into her backstage and she took the time out to talk to me about her personal and professional journey over the years.

Amy: I think I had heard an interview that you had lived with Johnny and June Carter Cash?

Heidi: I actually never lived with them. Ira Dean, my partner in Trick Pony, was friends with them and he introduced me to them and without him I would never have had the privilege to work and record with John and meet June and spend so much time with them.

Amy: They helped a lot of people starting out in Nashville.

Heidi: If you think about how that entire generation came up, the movies glamorize it, but it was the epitome of not glamour. Johnny always told stories about how they would make more room in the car by duct taping the bass to the roof. Not the bus, not the motor home, but the car. That is how they traveled back then driving themselves to every show in their car.

When we started out in Trick Pony, we drove ourselves across the country in a van and a trailer to all the shows for 4.5 years. There is something to be said for paying your dues like that. It makes those of us who have worked really hard to get anywhere really appreciate it and stop bitching. It makes you appreciate the milestones and the history.

Heidi: It has and in some ways it is good because country music has broadened its horizons, but I also appreciate the traditions.

Amy: What is your favorite song to perform live on stage?

Heidi: That’s a hard one. It really depends on your mood at the time or what is happening on stage. There is usually a magical moment on stage. There is a new song on my album coming out this fall called “Textin Texas” that is really fun to sing right now. The other night I sang with Jamey Johnson onstage with an old Waylon tune called “Don’t Think Hank Done it This Way” and it was amazing and like a religious experience on stage. It was like we went to church.

“Poor Me” is always a favorite. I think people forget that I sang it so it is usually fun to start the set.

Amy: Personal question. I travel 100% of the time away from home and I know you are on the road all the time. How do you stay close to your husband? Any tips?

Heidi:  Absolutely- Communication. Back in the era of Johnny Cash, there were no cell phones or computers, but with today’s technology there is no excuse not to communicate and get in touch with somebody. Even if it is as impersonal as texting, I take 5 minutes and send a text to my husband and tell him that I am thinking about him before I go on stage. We usually try to talk in the mornings and before we go to bed each night. Communication is key. You have to take the time no matter what and know that nothing is more important than reaching out to that person.

Amy: Who would be your dream collaborations

Heidi: It’s hard to answer with just one. Bonnie Rait is one. I have always been a fan of the blues and her history is so cool growing up in a Broadway family and her following the blues from a young age. Her story is similar to mine. I grew up in California listening to Ernest Tubb, Loretta Lynn and Marty Robbins. Something grabbed me. I started listening to Muddy Waters and Little Walter so I picked up a harmonica. Tom Petty and the Heartbreakers would be another one.

Heidi: You never stop looking around. It can come from something you read, a line in a movie, or something someone says. I learned the hard way that you will forget even if you think you will never forget the perfect line. You will forget it. I’ve learned to get up and write it down or play it in garage band. I think things just come to you or you hear something that reminds you of something else that brings out a melody. A lot of times if you get an idea for a hook and it has a direction. It may sound bluesy or be a country ballad or be a rocker song. This is also why collaboration is so important because you can throw ideas off each other and they may come up with something that you would not think of or take it into a direction that you may have never gone.

Heidi allowed me to get some candid photos and I caught her set where she sang some of her new songs off her upcoming album as well as classics like “Johnny & June.” 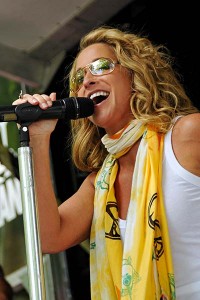 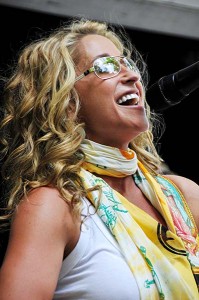 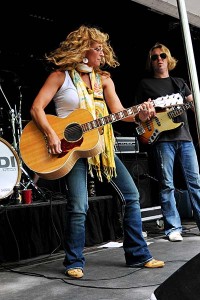