Helmet is an alternative metal band from New York founded in 1989. by vocalist/guitarist Page Hamilton. Helmet is preparing to release their latest album, “Seeing Eye Dog” this summer.

Leading up to Rock on the Range weekend, I was able to catch up with Page Hamilton, lead singer and guitarist from the legendary band Helmet via phone on Monday for an interview.

Amy: What inspired you to get into music at a young age?

Amy: The new album “Seeing Eye Dog” is set for release June 22, 2010. Can you tell me about the inspiration behind the name?

Page: The album release has actually been pushed back to August 24, 2010 as we try to finish artwork and finalize the tracks. I usually shy away from political statements, but there is some social commentary on the album. A seeing-eye dog is one that leads the blind around. I also read a poem by Ezra Pound, one of my favorite poets, called “The Seeing Eye” and the image just stuck in my head.

Amy: What is your favorite song on the album to perform live?

Page: So far we have completed five new songs for the album. One is not able to be performed at all because it is an orchestrated morphing of instruments. Others like “So Long,” “Welcome to Algiers” and “In-person” are currently being performed live. It is taking a lot of practice for me to play guitar and switch back to vocals. A beer or two helps me relax and usually improves the flow.

Page: I used to write all the music and then write out the words to it after I had the rhythmic pattern. Over the past 10 years, I will get musical ideas that inspire a vocal and rhythmic movement. I also have copious notes everywhere at home, the car, and all over the living space to capture ideas as they come to me. Language always fascinates me and I try not to make political statements and have no agenda. I feel like if you have an agenda it waters down the meaning of the songs. I just try to make observations.

Page: Bad Factor in the car today, a lot of classical music, and ELO at my birthday party last night.

Amy: Who are you most excited to see at ROTR?

Page: JANUS & Mastodon, but it would be better if Myles Davis and John Coltrane were coming.

Amy: A lot of journalists have written that you paved the way for bands today like Chevelle, Killswitch Engage and many others. How do you feel about being an influence?

Page: We’ve met so many great bands over the years and they are so respectful and complimentary. I just tell them, “Please call me Page, not Mr. Hamilton.” It’s always cool and a benefit to being old. Just tell them to stay out of the way of me and my walker.

Amy: Do you have a message to the fans?

Page: We look forward to playing live some new material and material from 1990-2010.

I caught the Helmet set on the Jagermeister Stage at ROTR and Page really rocked. It was amazing to see how many other bands from the festival also wanted to be there and check out the legends in action. 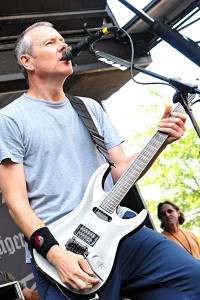 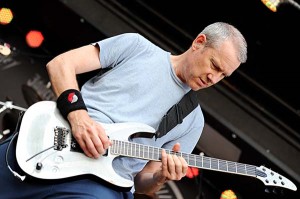 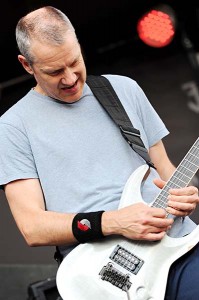