I traveled to Tennessee for my birthday weekend to see old college friends and to attend a Jeremy Cowart workshop on Visioning. Jeremy Cowart is an Entertainment photographer who lives in Franklin, TN who shoots celebrity portraits for publications like People Magazine, E!, and Warner Brothers entertainment just to name a few. He also was the tour photographer for the US leg of the Britney Spears Circus Tour in 2009. He also produced the images for the Hope for Haiti Project to bring a voice to the people of Haiti after the devastating earthquake that hit the country on January 12, 2010.

When I heard about a workshop with him online, I quickly signed up because I was extremely interested in hearing his story and get some potential guidance on how to get on tour with Britney. Many of my close friends also know that I also am fascinated with the concept of having vision and visualizing what you want in your life and making it happen. The workshop concept intrigued me even though I was a bit disappointed there would be no shooting opportunities.

The workshop that I attended included a day in the classroom and a day watching Jeremy setup and shoot promotional materials for Matt Wertz, a local singer songwriter in Nashville. Matt’s songs have been featured on shows like Brothers and Sisters and Wildfire. He can also be heard in the movies Employee of the Month and My Super Ex-Girlfriend.

Check him out…Happy music to make you smile!

I had a few takeaways from the workshop. We reviewed some up and coming photographer’s work that truly have vision. There was a theme in their work that made it consistent and original and some were just 15 years old. It would be clear to any art director who hired these people exactly what they would get. So consistency in style was my first take away. I also learned that if I wanted to work as a music photojournalist I needed to have a website that focused on what I wanted to specialize in so that I could market myself and the work. This website is a result of that feedback.

It was fun to hear Jeremy’s stories about shooting with celebrities and the challenges he has had along the way. At the end of the day it is about trying to find creative ideas to bring to the table to stand out and make good art.

Day 2 was all about watching Jeremy work. It was a very professional shoot with hair, makeup, styling, wardrobe, and three lighting assistants. There was gear, gear, and more Profoto gear that I was drooling over for most of the day. We walked around and scouted locations at Centennial Park for the shoot and it was amazing to see Jeremy take just a few photos and get the shot. I took behind the scenes photos of setups that can be seen below. 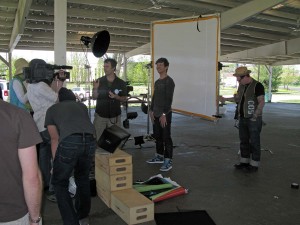 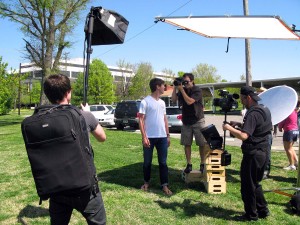 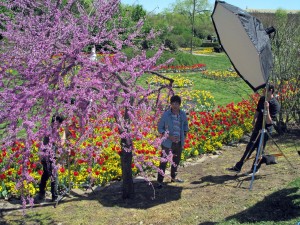 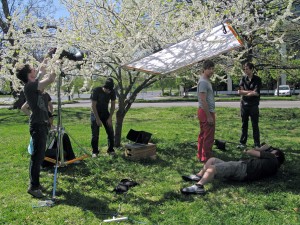