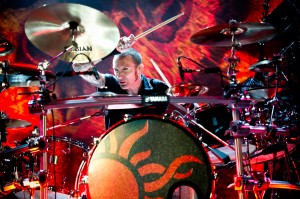 Looking on music shelves this week, it will be hard to miss the bright and loud 1000HP, the latest offering and number 1 rock album from Godsmack. It may be a little bit different vibe, but it is the same great Rock music they have given audiences for well over a decade. Since the breakout Evolve album in 2000, they have literally been evolving with the genre, captivating audiences and gathering fans with each performance. Amy was able to preview their show at UPROAR Festival Sunday night at Riverbend with drummer Shannon Larkin. After a couple subdued tours in which they let the music speak, they are back to their roots with hard hitting, pyro-filled, knock you back action.

Amy: You guys have been working hard. You will be releasing the album next week, 1000 HP. What can the fans expect from this album?

Shannon: We kind of infused a different sound for us. It’s more of a punkier vibe as far as upbeats and down stroking. Not so much chunk-chunk as the last record or box or Metal. It is a fine tuned thing we do each record because we don’t want to keep making the same record over and over again. Yet you can’t change your sound and alienate your fan base. The last record we went balls out Metal sound. So on this one, we made a conscious effort to try and change things up and give a more Punky vibe to it.

Amy: What is your favorite track to play off the new album?

Shannon: “1000 HP” the song. I just love it. It has an AC/DC vibe to me. I don’t get to play much four to the floor drumming so it is just a straight ahead full fierce and I love it.

Amy: I actually watched the webisodes that you guys created to promote the new album and that was interesting. I’m sure the fans love to see the behind the scenes of the new album and how the album was made. During one of the webisodes, the band talks about how you were the one who introduced Dave Fortman, the current producer, to the band on the last record. Why did you think he would be a good fit for Godsmack?

Shannon: I was in a band called Ugly Kid Joe with Dave and he was the guitar player and we toured the world together for six years and made a couple records. I knew that not only was he a great producer with great ears and a great engineer and a great mixer, but I knew also he was this great dude. When you start making records, it gets balanced and pressure on and arguments ensue, the producer has to almost be a psychiatrist and step in when band members get in each other’s face and Dave is just a great person that if there is any tension in the room over a part for instance, if we are arguing what is a better part or arrangement of the song, Dave diffuses the situation with humor. He is good at that and just making everybody feel comfortable when the red light comes on. He is just brilliant. I can’t say enough about him. It doesn’t hurt he had made hit records with Evanescence, Mudvayne, Slipknot, and the list goes on and on but that helped too when I introduced him to Sully. But then an hour after meeting with Dave, Sully loved him too. I knew he’d get the gig after talking to Sully if it was up to Sully because he co-produces every record. I knew Sully had to like Dave and I knew he would, perfect fit.

Amy: Where did the name come from for the album?

Shannon: When we were writing that song, Sully was trying to do a history of the band type song. He was thinking we are at 100,000 horse power. When the song came together, it was too many syllables and 1,000 horsepower fits perfectly, but is that enough horse power. Ironically, we have this Top Performance Pro Shop beside our headquarters here in New England. They soup up cars and rev up cars and we went next door and the dude fired up a 1003 horse power Chevelle and that was enough horse power. It wasn’t even street legal. It ended up being the car we recorded to start the album and the song.

Amy: You have been doing a lot of drum clinics. Why is it important to you to get out and work with younger people and do drum clinics across the country?

Shannon: My company Yamaha gives away drums. They are the best set drums I’ve played number one, so I just love and am honored to be endorsed by them. They have been on me for years about getting out there and trying to push the company. I am the guy who had never done a clinic before and I am not a solo artist or soloist. I am a band guy and always have been a band guy. I never even do a drum solo. When Sully & I play together the whole band is on stage and it is a drum feature. I had always said no to Yamaha about doing these clinics. Then I heard Paul Bostaph who plays for Slayer. He did the clinics but he didn’t do it as a soloist or solos, he played along to Slayer songs he recorded and got the drums taken out. So when I realized I could do that, then I was like “Wow,” I had done like 30 records and I had played a bunch of session work and all these cool records I hadn’t been able to play in years. So when I found out I could have all these drum tracks removed and play a clinic and play my favorite songs I had recorded the last 30 years, I was in. I only did a one week tour so far and I only did the West coast and it was really fun and cool but weird with nobody around not having my guys. It’s funny, I told people you can be on stage in front of 50,000 people and not be nervous, not one butterfly in my stomach but walk into a Guitar Center that is lit up like a K-Mart and there is only 150 dudes out there but they are all drummers staring at me and I’m scared to death. It turned out to be really fun. I was happy to do it.

Amy: Have you got any tattoos recently?

Amy: I know you are a big fan of The Ramones too and we just lost the last Ramone. Do you have any thoughts about that?

Shannon: It’s devastating in so many ways, I just don’t like them they are my favorite band of all time and I have seen them over 20 times over the last 25 years. When Tommy died, I really felt my mortality because, I don’t know your favorite band is, say it’s Led Zeppelin, there are three out of four of those guys still alive and they were older than The Ramones. I asked everybody. Not one person I know has had every original member of their favorite band die. It really hit me hard. Am I next? It was really crazy there for a minute. Of course, I just saturated my ears with Ramones songs for the last two weeks. It was devastating.

Amy: Last time I spoke to you we were talking about your daughters and now they are teenagers. Do you have any advice for other Dads?

Shannon: Yeah, just try to hang in there because they all go through that teenage time where they seem to hate their parents and they don’t. They don’t hate you and will come back around.

Amy: What can the fans look forward to here with Uproar here in Cincinnati?

Shannon: Well we are going to play a bunch of new stuff. I don’t know if fans look forward to that but we sure do as a band. We have been together for 12 years and we love the old stuff and we will play plenty of that too but we will be doing five new songs in the set which is exciting for us. They can definitely look forward to a big show also. You know the last few tours we toned it down because we used to have these monstrous shows with the pyro going off and bombs going off and video. The last couple tours, we tried to prove to ourselves we try to be a great live band and don’t need all the bells and whistles, so the last few tours has just been the band and some lights. But this time we are bringing it all back, things blowing up and flames flying off the stage.

Amy: I always loved the fire.

Shannon: It definitely is cool having the big columns of flames shooting up. It’s funny because these summer tours are hot as hell anyway and they are flames and are hotter than hell. So we are up there sweating and it is worth it especially when those concussion bombs go off, I love those, they are my favorite parts, those real loud mortars and everybody flinches in the crowd. It is crazy and cool.