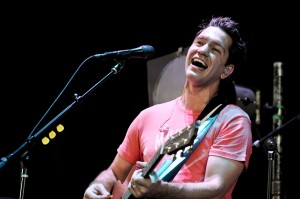 Andy Grammer has a unique blend of musical talent, incorporating his own piano and guitar playing, and lyrical style in which he uses his smooth vocals and hip hop like hooks to get crowds across the world fired up. Since his self-titled debut album in 2011, he has seen great success through radio airplay and has gone on tour with the likes of Train, Natasha Beddingfield, and Colbie Caillat. He is embarking on his first headlining tour, which will see him come through Cincinnati on July 5th in Covington, KY at the Madison Theater. This tour will be your chance to see him in an intimate venue setting and see him up close and personal as he delivers his hits.

Amy: What can the fans expect from the new album coming in August?

Amy: The album is called Magazines or Novels. Is there a story behind the title?

Andy:  It’s like how we ingest music these days. We are very ADD. A lot of times we just read through it like magazines. Tear through it then throw it away. My goal was that not to be the case with this record. I built like 100 songs. I wrote the first 50 and realized I had a lot more magazines than novels so I wrote another 50 and I think it is really good actually. I am really excited about this album.

Amy: What is your songwriting process?

Andy: My process is more like get tired and chasing something all the way to the end and then step back and see if it is any good. Sometimes it is and more often than not it is not. I have to write a whole hell of a lot to get the jams I’m real proud to have on the album.

Amy: You have had several huge hits on radio in your career. Do you know right away when you have a hit on your hands when writing?

Andy: I don’t. I really don’t. That’s what is so confusing about it. I wouldn’t write it unless I thought it was great. I write it and am super stoked about it. As time goes by I can kind of tell whether it’s going to hold up.

Amy: Do you have people close to you that can give you the feedback?

Andy: Yeah, my manager and I pretty much are the ones that make the decision.

Amy: I know you are about to hit the road today to start the tour. What is the best and the worst thing about being on the road for you?

Andy: We are doing shows that are like half old stuff and half new stuff and the fans will be really into it. The worst thing about being on tour is finding food that is good. It is pretty difficult to do, to find like good food. It is easier to find McDonalds and then you fall into and feel bad. The best part of this tour specifically is playing new songs and seeing the fans react to it. It’s really exciting.

Amy: I have seen you play in Cincinnati when you opened for Train. Do you have any specific Cincinnati tour memories that you remember or fun things in Cincinnati you like to do?

Andy: Fans in Ohio are the best. Any show in Ohio, fans know how to have a good time, they party harder than anyone else at shows. It’s real. I’m not sure you know that about yourselves. I have toured around the whole country and it is just better in Ohio.

Amy: Have you ever been starstruck?

Andy: Sure.  When I met Sara Bareilles I was a little bit starstruck and I don’t even know why. I really liked her and was excited to meet her.

Amy: Is there anybody you want to collaborate with maybe a different genre of music?

Andy: I would like to do a song where I did the hook and Macklemore did the rap. I think that would be dope.

Amy: Do you have a favorite guitar that you like to play?

Andy: Yeah, Taylor is my jam. They hook me up with guitars and they sound amazing.

Amy: Is there one specifically? Some people have one guitar. I saw one person last week with one they had played so much they had worn a hole in it.

Andy: I don’t have that. I bust them up a lot and I have to get them fixed. I have also had this thing where I have had like three of my guitars stolen out of my car in LA and I don’t live in a terrible place. I think someone is on to me.

Andy: Expect to see a little bit different light. One song has a vocoder on it. There is a little more high energy stuff. I am really excited. High energy is in my opinion, better.

Amy: We are excited to see you and that you are headlining. Thank you for taking the time to talk to me.