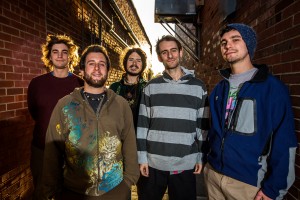 Papadosio is a trend setting progressive voice in the world of Rock. They mix an electronic sound with a dash of the psychedelic from past generations. They have created a ground swell through the musical landscape developing their own festival, Rootwire, based out of Southeastern Ohio, a large gathering celebrating Earth and Life. Amy caught up with drummer Mike Healey and they were able to talk about his Ohio roots and the development of a great project like Rootwire. Papadosio will be having a homecoming of sorts as they storm into Bogarts on Friday night for an evening of high energy and eclectic sounds.

Amy: I wanted to ask you about the Rootwire Festival, how did you guys start being involved with the festival and why did you choose the location in Ohio?

Mike: Well the reason behind the location, some of us went to school in Athens, Ohio and we actually played some festivals there before we started doing Rootwire six or seven years ago. We checked out the property and really liked it and had an idea to do a festival ourselves from travelling a lot and making so many awesome friends across the country we could collaborate with and create an amazing event. We decided to choose that land because we had previously visited it, the Cavernous Woods outside of Athens in Logan. It is absolutely beautiful here, some of the oldest mountains in the world in the Appalachian Foothills. There is a lot of great energy there, it’s beautiful and it just couldn’t be a more perfect place to throw a festival the last four years. That’s how that place came about. The festival, we have just been collaborating with so many amazing friends. We just invite our friend bands and friend artists from all over the country and installation artists from all walks of life. It’s just been an absolutely amazing time for four years.

Amy: I saw the band for the first time this year at All Good. Listening to your music, it feels like there is a little bit of a spiritual element to it that inspires it. Do you guys consider yourself spiritual or religious and how does that inspire your music?

Mike: I would say that none of us are religious. There are definitely all sorts of messages throughout our music of some sort of divine connection to Mother Earth and taking care of the place we live and taking care of others and loving others, all kinds of common things we like to talk about. I guess if you want to call it spiritual you can, we call it a no-brainer. You love your neighbor you take care of each other. You want peace in the world and all these universal values, I feel like people can connect to. There are definitely a lot of those messages in our music. I don’t find any of us to be religious at all. Music is our religion honestly. We are always searching for alternative thinking. We are all into the green movement and really into eco-building and sustainable living and alternative energy. All these things are on our mind a lot and we speak about them in music.

Amy: The band has relocated from Ohio to Asheville, NC. I heard you moved to a cabin somewhere outside of town. You must be together as a band a lot of the time or all the time. Is it hard being around each other all the time?

Mike: We actually don’t live in that cabin anymore. We are spread out around town living with our girlfriends and stuff. We do spend a lot of time together. We are on the road 200 days a year. We are always just hanging out on the tour bus together. Even when we are home we still get together and hang out. We are a big ol’ band of brothers just love spending time together. We really enjoy making music and we are all really great friends. It is totally insane. We are gone all the time and it is hard on our ladies spending so much time away. It is learning how to be grounded and feel like you have a home when you are home is kind of hard because we are all over the place all the time. It’s quite the crazy lifestyle. It is not for everyone. We love it. We try to do the best to make it work.

Amy: What is your favorite part of being on the road?

Mike: Definitely playing music every night. That is what we live for. The whole set up and tear down and all the long hours of waiting around are not so fun but once you get on stage and are able to create and get people dancing and seeing all these smiling faces everywhere, that definitely fuels us. Some of the favorite times too are when we are on the road and have a couple days off that we get to go do beautiful things like go visit beautiful national parks or go on some crazy hikes or go relax at a really nice hotel or someone’s house. Those kind of times we look forward to because it is nice to relax and see friends all around the country.

Amy: What is your favorite song to play live?

Mike: That’s a hard one. We have like 50 songs that we have in rotation. I love all of them. I would say a new favorite, we have some new songs, I really like playing a new one that Anthony wrote called “New Love”, they are really fun new songs we have been playing live a lot in every town. Everybody has been really digging it. It is hard to pick a favorite because I love all the material.

Amy: The band has played a lot of festivals, particularly around Ohio. Do you have a favorite festival moment from the past?

Mike: There are so many. I guess we love playing All Good every year because those have been some of the biggest crowds we have ever got to play in front of. We got to play on the main stage last year in front of 15 or 20,000 people. Previous years we got to play after Flaming Lips one year and right before Primus one year and those crowds were like 30,000 people. It was totally insane. It was so cool. Those are definitely high moments. Obviously Rootwire is a big moment. We have started playing some festivals on the West Coast and all over the country. We are really enjoying trying new ones out. We have played so many in the Midwest and East Coast and it has been so nice to try some new festies out west. This year we are doing some of our first International plays. We are really excited to go down to Central America and play like an All Inclusive Festival in December. There is so much going on. I guess All Good has had some really big highlights in the past and many more to come.

Amy: I know you organically make music together a lot, but can you describe your songwriting process?

Mike: There is kind of several different ways we go about doing it. We will have a like a jam session and we come up with a song on the spot and write it together in the rehearsal room and somebody will have a riff and we will go around adding pieces of the puzzle together as a group. Other times, somebody will have almost a completely finished song idea and bring it to the table. People will learn their parts and put their own flare on it. Sometimes someone will have half a song and come to somebody else to help finish it and someone else will write lyrics. It all depends on what is happening during the creative process. Sometimes we will be on tour sitting on our laptops and all of a sudden a riff will come to our heads and we will start writing the song while sitting on the van or the bus and then bring it back after tour and bring it to the band and go from there. Sometimes we are walking through the woods and we get an idea in our head and sing it into our phone real quick and then we will go back later and hop on the computer and our instruments and figure it out and bring it to the band later. It just comes to you sometimes. It’s crazy how it works. It is part of the creative process, you just never know when you will get an idea that will pop into your head and you have to jot it down somehow.

Amy: I know you are from Athens. I am sure you have spent a little time in Cincinnati. Do you have any fond Cincinnati stories from the past?

Mike: Oh yeah. I grew up in Cincinnati. I lived there until I was 18 and then I went to Athens for school for 7 years and then I moved down to Asheville. I’ve been playing drums since I was three years old and I have been in band non-stop since fourth grade so from fourth grade all the way through senior year I was in so many different projects, I played at Bogarts all the time for the Battle of the Bands in high school and got a lot of exposure back then with my younger bands. Now it’s full circle, and now my band Papadosio is back playing at Bogarts again. We played there last year for the first time since high school. It was great. It has a lot of memories for me when I was younger.

Amy: Where did you go to high school here?

Mike: I went to Clark Montessori in Hyde Park. I played in a steel drum band all through junior high and high school too and played all over the city and also toured the country, lots of music going on. I played in hip-hop bands, and rock n roll bands, metal bands, alternative rock bands, all sorts of bands in Cincy as well as steel drum ensembles and the steel drum band in high school. I was quite the busy musician all throughout my childhood.

Amy: This is basically a hometown show for you so it will be fun to be back.

Mike: It’s great, so many friends and family.