Jonathan Tyler and the Northern Lights is an Indie Rock band with a bluesy edge that has been entering into the Rock landscape in recent years. They are workhorses touring anywhere and everywhere since the band was formed in 2007. They have played along legends like ZZ Top and are very popular on the festival scene every summer playing to large crowds all over the country. Although they have not released an album since 2010, there is promise of a lot of new music when Tyler spoke with Amy about their upcoming show in Cincinnati this next week. The band will be performing with Taddy Porter at Bogart’s on Wednesday night. For a different, high energy sound, this will provide a great night of music.

Amy: You are currently on tour with Taddy Porter. How did this tour come about?

Jonathan: We have toured with them a lot in the past. Both of our bands formed around the same time. I think about three or four years ago. We started playing shows together and became friends. When we were looking into a tour this Fall, their name came up and everybody was really excited about it. It just came together naturally.

Amy: You have been touring pretty extensively since 2007. What is the best and the hardest part of being on the road for you?

Jonathan: I love playing music live. There is something really special about it. It is one of my favorite things to do. It is really fun to get in front of a live audience and play songs and to just kind of get that energy going between the crowd and the band. It is fun to see what happens, a lot of unique, special, unexpected things happen sometimes and it makes it more fun. It is always fun to try out new songs on people as well.

Amy: Are you guys working on new music currently?

Jonathan: Oh yeah, pretty regularly, all the time. We will be playing new songs at the Cincinnati show.

Amy: What does the perfect day look like for you? 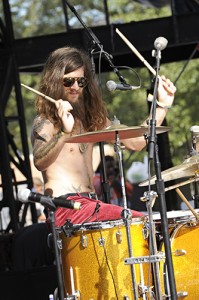 Jonathan: Well I live in California so I love to go to the beach and I love to surf and I love to eat good food and spend time with my girlfriend. When I am on the road, I love to walk around. We usually travel during the day, early in the morning to the city we are playing in. We will set up our gear and we usually have a few hours off. I try to find a good restaurant in town and try out new places basically. I try to see what the city is all about.

Amy: I know you are in different cities every day so it all merges together sometimes.

Jonathan: Yeah. For some reason we haven’t played Cincinnati very much. I don’t know why. We are looking forward to it.

Amy: At one point weren’t you living in Texas?

Jonathan: Yeah that is where the band was formed. I moved in January to California.

Amy: What music are you currently listening to that is inspiring you?

Jonathan: There is a lot of different stuff. I really like the band Endless Boogie from New York. It is like a ZZ Top style Rock n Roll band. I really like those guys. There’s some Electronic music also that I like which probably doesn’t seem likely because I play Rock music and it may surprise some people. I listen to a lot of different music, really anything that will inspire me. I’m also really into Bruce Springsteen right now. This guy named Wink Ray I recently discovered. He is like this 50’s Rockabilly, kind of like Rock guitar player.

Amy: Some people are saying that Rock is dying. Do you believe that with all the popularity of EDM and other genres of music that is happening right now?

Jonathan: Yeah I do. I think it will come back around. I think everything kind of goes in cycles. I think it is easier right now for musicians to do the electronic thing because it is cheaper. You can just make it with one person really. You don’t need an entire band to make tracks and people are making recordings out of their houses. The whole industry is turned up on its side. It’s

interesting for sure, but I think Rock is always going to live on.

Amy: If you could trade places with anyone for a month who would it be?

Jonathan: I have to think about that. I really don’t want to be anyone else. That’s a hard one. I honestly can’t say.

Amy: Do you have any habits you’d like to break?

Jonathan: So many. Smoking cigarettes would probably be the number one thing. I guess I don’t want to break it that badly since I still do it.

Amy: What can the fans look forward to in Cincinnati next week?

Amy: I have seen you many times over the years. I look forward to it. It is always high energy and great Rock n Roll.

Jonathan: Well thanks I appreciate that. We have a lot of new music. We will probably play half new music and half of the older songs. I think people will be happy to come out and see something different if they have seen us before but maybe hear the songs they love as well.