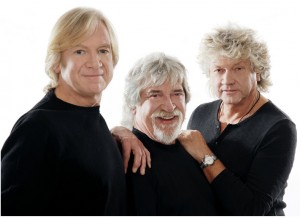 The Moody Blues personified the Progressive era of Rock n Roll in England of the 60’s and 70’s bringing a psychedelic sound that rivaled the sounds of The Who and others who shaped the genre. They produced so much music between 1965 and 1974 that provides the band with one of the more extensive catalogs of the era.

Amy was privileged to speak with the drummer Graeme Edge. The two discussed the differences of life on the road and the studio today compared to the glory years of stadium shows, acid trips, and phenomenal music. Moody Blues are still hitting the road and entertaining three generations of audiences worldwide. They will be delighting the audience of the PNC Pavilion at Riverbend on the 27th of September.

Amy: I cover a lot of music festivals all summer long and last night I watched the video from the Isle of Wright Festival in 1970 where you guys played to a massive crowd.

Graeme: Oh those were the days weren’t they?

Amy: Yeah, it looked amazing. What were some of your favorite festival moments in the early years?

Graeme: That one you actually saw when we got to play at Sunset when the sun was actually going to go down. That was pretty impressive. I enjoyed that. I don’t know if it was a festival but the first time we did Red Rocks, it was so beautiful. That is another one that stayed with me. Another one for entirely the wrong reasons was one we did in Germany which was kind of strange because somebody booked the Moody Blues thinking we played Blues. A lot of big tattooed pink and frizzy haired audience members were a little puzzled. That was a favorite because they did come around and some applause toward the end after they figured that maybe we were playing a tune that was somewhat entertaining.

Amy: Did you ever get nervous in front of these huge crowds?

Graeme: It doesn’t matter the size of the crowd, I get nervous before I go on any night.

Amy: Are you working on any new music right now?

Graeme: Not really, no. I really don’t know what we would do about it now that the business around it has changed so much. Back in the old days you used to have record labels and they owned studios and there was some kind of organization. Now you make it in a room on Garage Band so everybody uses the same sound. You have a lot of swear words and belief that you have to use sexual references, a bit of controversy of some kind like having a bra strap caught on something, and that is really not me. I don’t really care to be involved in that. The answer to the question is not really. We would love if somebody appeared and would say, “Here is a studio, go in there for three months and make an album like you used to.” That ain’t going to happen, I don’t think. So we will ride off into the sunset and join our really considerable catalog of music.

Amy: You really do have an extensive catalog of songs. What was the process for putting together set lists every night for this tour?

Graeme: There are six or eight songs we have to do because we wouldn’t get out of the place alive if we didn’t do the favorite ones. We have to do “Nights”. You have to do “Tuesday Afternoon”, “Singer in a Rock n Roll Band”, “I Know You are In There  Somewhere”, “The Other Side of Life” and “Isn’t Life Strange.” So half of the set list writes itself and the others we sort of try to represent most of our albums with at least one song and we try to highlight each show with a particular album by doing two or three songs from that album. Most of the songs on the set list are put together to control the emotional impact.  You play a fast one and then a slow one. You make sure modes flow from one to the other. You can have two songs with fast tempo with a completely different feel. That is the mode of it. For instance, “Tuesday Afternoon” and “The Other Side of Life” are virtually the same tempo but completely different songs. “Tuesday Afternoon” is sort of light and green feeling. “The Other Side of Life” is very dark and yet they are both exactly the same tempo. Of course you have to look at when you when you do a set list is the keys to something. Strangely if you do three songs in the same key, say C, one right after the other, even though they can be very different, somehow it gets boring. I don’t know how that actually happens, but it does. That’s something you have to look out for.

Amy: When you guys were writing the songs originally, how did your religious or spiritual beliefs influence the songs?

Graeme: (Laughing hysterically) That is none of your business.

Graeme: Mostly it was the drugs that influenced us. There is an overall theme that we have to love nature. There was two active Christians in the band, one Agnostic, that’s me and I’m starting to change my tune from those days, and one Mystic. So all those things threw into the pot and we came up with what we came up with. But mostly I think it was the acid.

Amy: You have been in the band since 1964 with short breaks here and there. What is the most number of days you have gone without playing music?

Graeme: I started playing music when I was four. I play music every day.

Amy: Do you guys have any favorite Cincinnati memories from the past?

Graeme: I will tell you the truth love, when you are on the road you really don’t know where you are.  After making the announcement at the end saying thank you, he has it written down in big words at his feet because people really get pissed off if you get the name of their town wrong. You just go to the bus, you get off the bus and sometimes you go straight to the gig, sometimes you go to the hotel and get a quick wash and clean up, get down to the gig in time for sound check, have an early dinner, sit down and do what you do for a couple hours until the stage show comes up, take a nap or meditate or whatever it is you do, then you do the gig, then you either end up go back to a hotel and get up and go back to the bus or get on the bus and go to a hotel. You never get a time to have a look at a town or see where you are. I probably don’t know where I am until I see the room we are playing in. I will remember that. I really don’t have any memories.

Amy: Do you ever get asked or give advice to new bands starting out?

Graeme: We used to sometimes but now we don’t because the gap between us and new bands is just way too wide now. The best advice you can give anybody is unless you really love it, don’t get into it because it is going to break your heart. Unless you can’t consider doing anything else with your life, don’t do it because chances are you are going to working away your entire life and get nowhere. If you consider the odds, the thousands of people who start that manage to make a living and then throw in the number of people that get wiped out and ruined emotionally. You only want to be in this business if you care too much like me.

Graeme: Oh yea, huge, millions of them. Many personal ones, many career ones, many decisions, but would I change anything, I’m not sure I would because I really like where I am now. There is one or two, some personal ones, things I have done to hurt people, I regret that as I approach my time looking back I wish I had not done that or I should not have done that, so I have a few regrets but I wouldn’t change a thing.

Amy: What is it like playing for three generations of fans now coming to your shows?

Graeme: It’s fun. When you look around and see these people 20 or 25, you look to see if they are still coming with their parents. We still see a few people with their parents, when they are little kids and get them up to the front of the stage at the end of the show, I always give the little kids my drum sticks because they have sat through two hours of boring music with their parents and they should get a little treat. There are some I have watched grow up over the years. It is gratifying and when you see three generations you think you got one or two things right.

Amy: What do you feel is your greatest Rock n Roll moment over the years?

Graeme: For the world or me personally?

Amy: You can tell me both.

Graeme: It may be the same for both. My greatest Rock n Roll moment is when I saw… This is tough. For me personally, there was a club in London where we used to all play. People would fly in from all parts of the country because the bar didn’t close until 4 o’clock but the band stopped playing at 2. We all used to get up there, The Animals, us, the Stones, whoever the popular bands were at the time. We were there one night with Jack Bruce who was on bass guitar, Eric Clapton was on lead, Chaz Chandler from the Animals brought this Black American up on stage and it was Jimi Hendrix and I was playing behind Eric Clapton and Jimi Hendrix in a club in London before cell phones so nobody got a copy of it. I would have loved to see that. To see those two guitarists, what a wish, and that was when they had a respect for each other, and that is when they won each other’s respect. It was something to behold. That was the greatest moment for me. The greatest moment for Rock n Roll was probably the day Elvis Pressley was born.