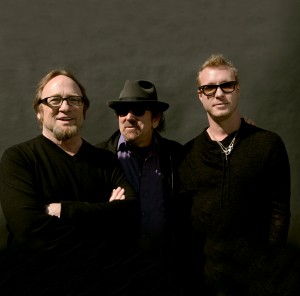 Kenny Wayne Shepherd brings a youthful side to American Blues music. He has seen great success since his first album Ledbetter Heights going platinum and reaching number one on the Blues charts. Now he has developed a new exciting project, forming a band called The Rides with Stephen Stills and Barry Goldberg. The Rides will be headlining at the Ohio River Throwdown Saturday at Riverbend  playing alongside other acts like Tedeschi Trucks Band, JJ Grey and the Mofro, and Los Lobos. It should be an awesome night to spend with family and the Blues in the Queen City.

Kenny: Well the whole thing was a really good experience. Everybody had a really great time doing the record. It’s just very interesting. You look back over the course Steven’s career, and Barry as well, and these guys have made some really tremendous records in their time. They have also been on so many albums and done this for so many years that they have accumulated a vast wealth of knowledge of how to do things in the studio. For me, even though I have had my recording career for 20 years now, I still consider myself to be like a sponge just trying to soak up as much information as I can. I learned a lot from those guys and it was a really good time.

Amy: Where did the name of the band actually originate?

Kenny: We were putting our heads together. It went on for two weeks. One of the hardest things to do is to come up with a band name, at least it can be one of the most challenging things to do. A lot of the reasons why it is so hard to do nowadays is because almost every name has been used. Everything we came up with, we would go back home and I would look it up online and do a Google search and someone would have that name and we would start over again. We spent a lot of the time in the studio between recordings, Steven and I are both big car guys, I mean we love cars. Steven and his wife have some of the most incredible cars you could hope to own. I have a pretty cool collection myself. We spent a good bit of time talking about cars and driving and stuff like that. As we were exploring name options for the band, one day we were at Steven’s house and I had driven my 1964 Dodge to his house and we were walking out to the driveway to leave and he just looked at my car and said, “You know we should be called The Rides.” I was like, “Yeah. That’s cool.” I went home and checked and couldn’t find anybody with that name. So here we are.

Amy: What is your favorite car you have?

Kenny: I don’t know. I would say right now, my 1969 Dodge Charger and I think it is one of the most beautiful, one of the most visually stunning cars that was ever designed. Probably that one is my favorite.

Amy: I have listened to the new album and I really, really love it. What is your favorite song to play on the new album?

Kenny: I go through phases when I do a new record like, “Right now this is my favorite song…” and then a few months from now a different one is my favorite one. Currently my favorite is “Can’t Get Enough,” the title track. That song is a great representation of this band and what we are about. It is one of the songs we wrote together. It has great, heavy guitars. It has got really, good lyrics. Even the vocal is nice and raspy and bluesy. There are lots of dynamics to that song and I think it is just really a great representation of who we are as a group.

Amy: Typically you are touring with your band by yourself. How did you manage or what was it like splitting singing duties with Steven?

Kenny: I split singing duties, to a degree, in my own band. I have Noah Hunt, who is from Cincinnati, he has been my lead vocalist for 17 years. But over the past few years of my career, I have stepped up here and there to the microphone when I wanted to and on the last record we recorded, Noah and I sang a lot of songs together. I have kind of started to integrate that idea into my own band even though I tend to let Noah sing most of the songs because he has such an incredible voice and it enables me more to focus more on my guitar playing. There is certainly in this band more vocal responsibility for me. I really wanted to do it. It is pretty cool. Like being around Steven who is so well known for his singing and vocals, it has been inspiring to me to step up to the microphone and sing more.

Amy: I thought I saw Noah at the Peter Frampton show in Cincinnati.

Kenny: He was there. He went to the show because we had just been on the road with Peter over the past two months we had done some shows with him. Noah wanted to go hang out and see everybody when they came through town so he went.

Amy: What is the favorite guitar you have ever played?

Kenny: The one I am most attached to is my 1961 Stratocaster. It is the first Strat I ever got. When you are a guitar player you hear this story about how there is this one guitar that is your sole mate. There is one guitar out there that was built for you. You know it the minute you pick it up and start playing it. Some guys go their entire lives trying to find it. I found this guitar when I was just 15 years old. The minute I picked it up, it fit me like a glove. I did everything I could to get it, I couldn’t afford it at the time then later on the following year, it was in Los Angeles at the Guitar Center. Then I came back a year later and it was still there. I still didn’t have the money to afford it but I decided I wasn’t leaving the store without it. I told my Dad, he was like “We gotta go.” I’m like, “I’m not leaving without this guitar.” Between him, the guy at my record company, my A&R guy, my music attorney, they decide they would split the cost up on their credit cards as long as I agreed to pay them back. I did. That guitar has been with me ever since. It has toured the world with me and been on every record I have ever done. It is just my baby.

Amy: That is a great story. I have interviewed so many guitar players and nobody has talked to me about their sole mate guitar before.

Kenny: Yeah well, it really is. I don’t know about those guys but there is a bond between me and that instrument. I feel like all guitar players have their go-to instrument and there should be a really solid connection between them and the instrument.

Amy: Social media has become invaluable with marketing music and musicians. When you are on the internet, in general, where do you spend most of your time?

Kenny: I am a creature of habit and repetition when it comes to browsing the web. I have a couple of sites I look at every day. I go online and get my daily dose of the news. I usually go to AOL because half of their stories report the news and the other half are like looking at a tabloid magazine. They have some really weird stuff they put up there. I have a couple car enthusiast websites like there is a website called Moparts.org which is for all Mopart Car enthusiast. I love the Dodge-Chrysler-Plymouth brands so I am a Mopart guy. There are a couple guitar pages that I go onto to see what is going on in the world of guitar. I check in, there is a page called thegearpage.net then I go to the Fender Forums and Fender.com. I am also obsessed with the new Tesla Electric cars. I have been browsing their forums a lot educating myself on their technology and stuff. I am kind of a geek when it comes to cars and all things mechanical.

Amy: Can you tell us what the fans can expect from the live show in Cincinnati in September?

Kenny: We just rehearsed, we just had four days to rehearse for this tour and none of us had played any of these songs since we recorded the album back in December. So, I guess with my schedule with my band and Steven and his band, we had a very narrow window of opportunity to prepare for this tour. We are basically going to do the album and throw in a few songs from my catalog and Steven’s catalog and stuff that Barry wrote that other people recorded. The whole goal is to be loose and have a good time and just play music together. They’ll hear a little bit of my stuff, a little bit of Steven’s stuff, a little bit of Barry’s stiff, then they’ll hear the whole record.