Q&A with Miles Zuniga from Fastball 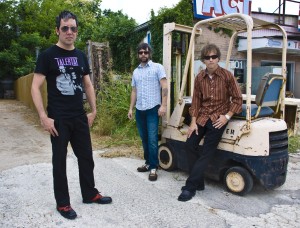 Time flies and it does not seem like it has been 15 years since Fastball released their biggest hit “The Way,” but their alternative sound transcended the 90’s and is already considered a classic. They have just gotten off the Under the Sun tour with fellow 90’s rockers the Gin Blossoms, and they will quickly begin their own headlining tour coming through Ohio.

Amy spoke with guitar player Miles Zuniga in preparation for their show in Dayton. The two discussed tour life and the changes in their musical hometown of Austin.  The Easthills & 650 North will open the show with Fastball headlining Friday September 13th at McGuffy’s.

Amy: What was the highlight of your Summer Under the Sun tour?

Miles: There were a lot of highlights. I got to play bass in the Gin Blossoms as well as playing with Fastball. That was a perk. Just being around those great musicians and stuff. It was probably playing at Humphreys by the Bay in San Diego. It is an amazing venue. It is right by the ocean and you get a real good view on stage that is pretty great. There was also a sailboat that some guy owned down in Charlotte and he named it “The Way.” Actually it was a yacht, an 85 foot yacht, and I got to go on his yacht. That was pretty nice.

Amy: How has the process changed over the years for you guys to put together songs?

Miles: Probably the biggest way it has changed, when we started, it was a lot harder to flesh out something on your own because I had a little 4-Track. I didn’t have a jump drive or anything. You couldn’t really imagine how the whole piece of music would look. These days, with computers, it is pretty easy. You could do something that could potentially even end up as a recording if you wanted. That is what has changed the most for me. I can construct songs and get them in the ballpark of what I hear in my head. To me that is really good. It eliminates a lot of the misunderstanding. Sometimes it is good to have an open slate and hear what a song is going to do with no pre-conceptions.

Amy: The band is from Austin. Austin has become this major music scene. How has Austin changed since the ‘90’s when you started out?

Miles: It has grown exponentially. It is kind of a drag for people like me because I felt like I used to have it all to myself. It wasn’t as crowded. It is kind of turning into into a big city and all that entails. The restaurant scene is more exciting but at the same time, traffic sucks. I don’t know where live music fits in to the whole bit. I think the live music scene is roughly the same amount of people playing live music. I don’t think the live music scene has grown in terms of how many people are doing it with the population. I think it has remained the same. I don’t know. To be fair, I don’t go out as much as I used to and see bands.

Amy: You have used Kickstarter, it is becoming very popular as well, to raise funds for your musical projects. Can you talk a little bit about that process and why you think it has become so popular for people to do use this as a tool for fundraising?

Miles: It has become invaluable. It is very hard to make money off recording these days with the advent of Pandora and Spotify. People are used to getting music for free or next to nothing. So it is very different from when we had hit songs and people had to go to the record store to buy the record. The problem is, the cost of making a record hasn’t come down accordingly. It has come down but it still costs. If you are going to do a record with artwork and everything and all that, it is going to cost you anywhere from 15 grand to 30 grand, maybe more. It just depends. Everything costs money. It is invaluable with a thing like Kickstarter, finding the fans willing to commit to the project before they have heard the music. That is pretty radical. That means they are real fans. They love what you do and trust that you are going to deliver something they are going to enjoy.

Amy: When you have written songs in the past, did you know when you were writing them that you had a hit?

Miles: No. We had no idea. “The Way” was our biggest song. We had no idea that song was going to do what it did. It was one of the more contentious numbers in terms of how we wanted it to go. Tony and I were at each other’s heads about how it should sound. I think all that creative friction really ended up producing a classic. We didn’t know it at the time in the moment. None of us thought it was going to be a gigantic song. In fact, it takes a full minute before the vocal comes in. I never would have thought that had commercial potential to wait that long before vocal starts. It turns out DJs love that kind of thing because they can talk over it.

“Out of my Head,” when I first heard Tony play that, I thought, this is great and this is a hit, and I was right but everybody kind of thought that song was a hit. It was not anywhere as big of a hit as ‘The Way” though and that is interesting.

Amy: What music is inspiring you right now?

Miles: I like all kinds of stuff. I think that band Foxygen is really good.

Amy: I love them. I love Foxygen. I am a music photographer and you can’t beat shooting them.

Miles: I would note too as far as new music, I don’t usually do this but I decided I would listen to the Top 5 songs or top 10 songs according to Billboard just to hear what people love because I never listen to radio or anything. I ended up liking what I heard and it has been the same top two songs all summer, the Daft Punk song and the “Blurred Lines” song. The more I learned about the “Blurred Lines” song the less I liked it. In the beginning I liked it a lot in terms of just listening to it and hearing it for the first time. What a great summer time jam and smash hit.

Amy: Are there any habits you’d like to break?

Miles: I am actually in the process of breaking them right now. I decided, I just got off this tour and I was drinking a lot on it. I decided that was it. That was the last hurrah. I’m not going to drink like that anymore ever. It is just not fun. It is like an old piece of gum. I have done it enough. I am trying to exercise more than I already do. I am trying to get up early. Boring stuff. It is not exciting stuff but I guess breaking bad habits isn’t exciting.

Miles: Being healthy and just being more present, not being worried about tomorrow or yesterday but being more into what is going on right at this second. I think if you can learn how to do that it is an amazing thing. Life definitely improves because there is something really fantastic being in the moment. It is hard to do. People are distracted. I am distracted with all the little modern conveniences with the internet and all that crap. I think it is really a detrimental thing but it is hard to resist too, you know instant gratification.

Amy: What adjectives do you hope people describe you at 75?

Miles: Get up around 9 in the morning, have a beautiful cup of coffee, go run or swim, have lunch, and then do some creative work for three or four hours, then go have dinner with a beautiful woman and then maybe go see a movie or something. That would be a pretty damn good day.

Amy: What has been your greatest Rock star moment?

Miles: I don’t think I can narrow it down to one single moment. There have been so many great memories. One night I got to hang out at a bar with David Lee Roth and Dennis Rodman. We played a really great show, an amazing show in Helsinki, Finland, having a number one record, being so far from home and to have these people freaking out about the music you wrote in your bedroom is pretty amazing.

Amy: What can the fans expect when you come to Dayton?