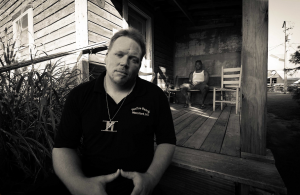 Lightnin’ Malcolm drives the genre of underground Blues as a member of the North Mississippi All-Stars and as a solo artist. Alongside counterpart Carl Gentle White aka “Stud” on drums, the dichotomy of their two sounds produces a rough, soulful sound that reminds folks of the days of acts like Lightning Hopkins and other Blues legend Howling Wolf. Audiences should be prepared to dance, party and delight in Malcolm’s real, Mississippi sounds Monday September 9 at the Southgate Revival House opening for and playing alongside the North Mississippi All-Stars.

Amy: I know you have an album coming out on September 10th. Can you tell me a little bit about the album?

Malcolm: Well it is 14 original songs and they have quite a few different styles on them. It is all based on my style, which is based on the hard driving, raw boogey, North Mississippi Hill Country style. It is mostly guitar and drums duo but we add some horns on a few tracks. We have Luther Dickinson playing slide on a few songs. So it is a pretty good mix of stuff.

Amy: I was listening to some of it this week. I love “My Life is a Wreck.” Can you tell me the story behind that song?

Malcolm: Well that is a semi-autobigraphical piece. One of my greatest influences was T Model Ford and he recently passed and that song was based on a style he had on the guitar. His grandson Stud is playing drums with me now. That was the first song we did in the studio. That was his first song recording and I thought it was a great way to feature it. My music depends on a great drummer. Drums are so important to the music and he is one of the best. I have known Stud since he was like one year old. He grew up watching me play drums with his granddad. He knows the style of drums that I like, the raw, four on the floor, predator style, no messing around. Just raw and making people dance. By us knowing each other so long, he is like my little, baby brother. We have this chemistry together that works so well.

Amy: I watched some videos of you two playing together. It is super high energy and looks like a lot of fun.

Malcolm: Yeah, that is the key to it all, we don’t have to hit a note exactly right or guitar solos. We just try to create as much kerosene and as much fun for the people as we can. We just want to see people party and have fun.

Amy: How old were you when you picked up your first guitar?

Malcolm: I was about 10 or 12. Before that, I really wanted to be a drummer. I used to beat on buckets and pots and pans, put the radio on and play along with them. I didn’t have any actual drums and I finally got a hold of a little piece of guitar. I didn’t know how to tune it or nothing but I fell in love with the strings in my hand. It took a while to learn how to tune it because I didn’t have anybody around me to show me at that time. Once I learned how to tune it, I started learning pretty fast. It just became everything to me. I look at the guitar like some people look at the Bible. It is like a vehicle for something later. I leave Earth. I can go on a vacation in my backyard with a guitar. I can escape to a whole other world with it.

Amy: I know you eventually moved to Mississippi after growing up in Missouri. How did you hook up with some of these great guitar and blues players in Mississippi?

Malcolm: I just made friends with them. I met Lightning right off. They saw something special in me I think. I wasn’t trying to blow them off stage. I didn’t ask them many questions like how to do things. They noticed whatever they played I could play back. They hadn’t seen too many white guys, or any guys that could do that. So we just made friends. It was pretty easy. Those were the kind of guys I wanted to be around. They really took me in. They were really nice to me. They never said I wouldn’t be able to do it. There was everybody else saying, “You won’t be able to do it.” They were the guys saying, “You got it. Stick with it.”

Amy: Alive or dead, what one person would you want to collaborate with if you could?

Malcolm: That’s a good question. I think, you know what’s funny, there are a lot of people outside of the Blues I’d like to collaborate with nowadays, of course like John Lee Hooker is one of my all time favorites, Howling Wolf, there are so many Blues guys. Out of living artists, I’ll tell you a guy I love right now, two guys I love, they are more like R&B is an artist named Lyfe Jennings, I don’t know if you’ve ever heard of him, he’s fucking awesome, he’s so sincere. Another guy is Anthony Hamilton who is a soul singer. To me, even though their style is way different than mine, those are guys I really hear singing where I’m like, wow, they really hit the ceiling. You don’t hear it that much anymore. Everybody is using effects. You really don’t hear that wail in that voice. Otis Redding had that, you heard his voice and you just had to see him. You don’t hear anybody like that anymore. I know people wouldn’t expect that from me but, when I am riding down the highway listening to music, those are two guys I really listen to, that I look up to and would be great to collaborate with.

Amy: That leads me into another question. There has been so much publicity this week around Pop music with Miley Cyrus and the VMAs with all this stuff. To me it shows how much more important it is to keep really authentic Blues music in front of people. What are your thoughts on that?

Malcolm: I agree with that. I’m out here fighting the good fight doing what I can. It’s not always easy. People have to support what is going on. If people start throwing their money at garbage, you’re going to end up with a lot of garbage. I can’t speak for the next person but I can say this, there isn’t enough hours in the day to listen to great music. There is all the great music you can listen to. There is definitely no time for nonsense. I don’t waste time listening to stuff that sounds like garbage. That’s just me.

My drummer Stud, he’s young. He was watching the awards the other night and I was laying on the couch trying to sleep. I didn’t miss much. The hours in the day are precious. I would use them wisely. If I had any advice, use my ears and my time wisely. You don’t have to listen to garbage. That’s about the best I can do. If anybody can make some money doing something, good for you, I don’t mean it the wrong way. If you ask me about serious music, there is great music out there, there is a lot of great music being made. It is just underground. Maybe it is too real for people. They are trying to run from reality or something. I am not the expert on this type of thing, I just know what I like, I listen to what I like. Even when I was a kid in school, I was listening to way different music. I was listening to Lightning Hopkins and John Lee Hooker and tell the other kids, “You have got to hear this. Check it out.” They just said, “Whatever.” I thought maybe when they grew up they would understand.

Amy: What is your craziest tour story you have had on the road?

Malcolm: Maybe this week. I had caught a flu bug in the airport flying home from Canada about a week ago. Then I had to go out on tour. The first four gigs, we had New Orleans, Houston, and Austin, Texas, big shows in some of my favorite towns. I was sick as a dog. I think it was the last set of the New Orleans show that I performed wrapped up in a blanket. I told the people not to look at me and keep dancing. We had a good time and people were dancing. It is something you have to do. It’s a job. 99.9999% of the time and I have more fun than is possibly legal on stage. Everyone is wild at work. Last week I had to work into it. Not real crazy, but it was real crazy for me for a couple of nights. For like three days, I couldn’t sleep, I didn’t eat. My body was a freak show. I finally got through it but that was pretty crazy.

Amy: What can the fans expect from you guys here in Cincinnati at the show?

Malcolm: We are coming to rock y’all. We want y’all to come and have fun and dance and boogey. We want you to get in the groove and forget about everything in the outside world for a couple hours and get in the zone. We want to have a party for y’all. Being on stage can be the funnest thing in the world when it is going right. When it is going wrong, you just want to disappear. It is a funny thing. When it is right, it is right as a motherfucker.