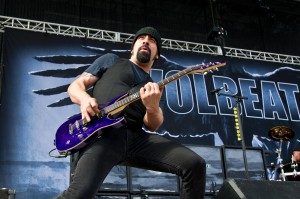 Volbeat has been headlining the biggest shows in Europe for nearly a decade. Now they are bringing their Metal sound to the states. In the position of up and comer now, they bring their high level of energy to their American tour which has translated into sold out shows across the country. Currently they are touring on their new album Outlaw Gentlemen and Shady Ladies. Amy was able to catch up with new band member and former Anthrax lead guitarist Rob Caggiano in preparation for their upcoming show in Cincinnati. The two discussed his transition to his new band and his broad musical influences that has evolved him since childhood. He definitely has brought a strong, veteran presence to a band that was already rising to new heights. Come check out Volbeat headlining the Rock Allegiance Tour at US Bank Arena on August 25th.

Amy: Could you tell me about the moment in the studio working with Volbeat on their new album that you realized you really could be in the band or it would be a good fit?

Rob: They had asked me to be a part of it two weeks into the process of recording. So it was pretty early on into the whole thing. I think it really stemmed from the first meeting we had when they called me initially when I left Anthrax and put the press release out there. A couple days later I flew to Denmark and sat down with Michael and went over the tunes and then ideas for the new record. We ended up collaborating and making music together. It was such a fun vibe and such a great chemistry. I think that was kind of a catalyst for everything else.

Rob: We definitely had a really good time during our show. It was a lot of fun. Rock on the Range, to me, is one of the coolest festivals here in the States. It seems like America is catching up finally with what is going on in Europe with these outdoor festivals. Rock on the Range is very well put together, very organized, just very pro and well done. It’s always a good time. I did get a chance to see Lamb of God play, about half their set and that was killer. It was great to see Randy back up on stage.

Amy: Has there been any hazing or initiation since you joined the band?

Rob: Not really, I was doing all the hazing. It has been pretty cool, pretty seamless, the whole transition. The way it went down, it was very organic and felt very comfortable from the beginning. It has been cool. We are having a blast.

Amy: I know it must have been a difficult decision to leave Anthrax which has been your job for the last 12 years. What were the factors for moving on?

Rob: I just had this feeling of being stuck. I just felt like I was on a conveyor belt, doing that for so long. I still love those guys dearly and they are like my family. I just wasn’t happy. It got to the point where I just wasn’t happy and I was questioning myself and what I am doing here. What are we doing? What’s going to happen in the future? I just came to the conclusion I needed a change. I think the main part of the problem was that Anthrax was never a creative outlet for me. By no choice of my own, that was just the way it had been. I think after all those years my heart wasn’t in it anymore and I needed something different. It was definitely an emotional, difficult decision to make but it was something that needed to be done.

Amy: What is your favorite guitar solo to play on the new Volbeat record and touring?

Rob: I have two favorites. I enjoy playing the “Lola Montez” solo and the “Doc Holliday” solo.

Amy: I know you have been producing for several years helping out bands and doing Anthrax and Volbeat records. Do you ever see yourself stepping out of Rock or Metal and producing other genres? There are a lot of collaborations happening right now with different genres of music.

Rob: Absolutely. I never saw myself as a solely a Metal producer. To be honest, when I am at home, I don’t really listen to Metal. It’s probably because it is what I do all the time. My influences are really varied and I listen to so many different albums and genres of music. I just consider myself a musician. I put 100% of my heart into whatever I am working on. With all these different influences, I can definitely do a lot of different things and have done a lot of different things in the past.

Amy: What are you listening to right now? What is influencing you?

Rob: My favorite record right now, if we are talking about new bands and newer records, is this band called The National I think is phenomenal.

Amy: They are actually from Cincinnati.

Rob: Yeah, it seems like they are doing pretty well all over the world. Their new record is phenomenal. I think it is just great, the production is amazing, the songs are great. I have never met the band. I had heard the name but I had never heard the music. We were doing a record signing in Copenhagen and I asked one of the girls at the store what was her favorite record, what should I check out, what came in that is the new hot record. She said to get the new National record. I said “Ok, I’ll give it a shot.” She was right. I dig it. I like Lana Del Rey too.

Amy: Do you ever plan to sit down and write your Rock biography?

Rob: Maybe one day down the road. I don’t know if I’m ready yet.

Amy: I’m sure you have plenty of stories. What is your craziest tour story with Volbeat right now?

Rob: It really isn’t that crazy on the road with these guys. It’s pretty mellow. It is a very focused thing. We do our show, the thing about being on tour, especially with Volbeat, we are headlining a lot of these festivals in Europe so we are going on late. We get there early at these festival sites and have a whole day of nothing. It is kind of boring just waiting to go on stage. Nothing really crazy has happened yet but I will keep you posted.

Amy: I am shocked you haven’t seen crazy things at the European festivals with fans.

Rob: I guess it depends what you call crazy.

Amy: Yeah, your idea of crazy may be different than mine. You may be like, “That’s totally normal.”

Amy: What was the name of your first band?

Rob: My first band ever was when I was 14 years old. We were called “Wild Heart.”

Amy: Do you keep in touch with those guys?

Rob: Kind of. I saw the other guitar player recently in Florida. He has been a friend of mine forever. The rest of the guys I have not spoken to in a long time.

Amy: Do you play any other instruments?

Rob: Yeah, I play drums. I play keys. I do our programming when I need to. I just make noise basically. I can pretty much get anything to sound decent. As a kid, I started out playing drums so that has always been in my heart. I went to the guitar from that in a sense with the rhythmic.

Amy: Your parents were supportive of the drums in the house?

Rob: Well they bought them. Yeah my parents were huge supporters of my music. My Dad is really into the music thing. It was definitely a very healthy atmosphere growing up for creativity and inspiration. There was always music around which was cool.

Amy: I started hearing about Volbeat and listening to Volbeat about two years ago when they were just coming to the U.S. Obviously they are huge in Europe, beyond headlining. What do you think is the biggest difference so far in the U.S. shows and the European shows?

Rob: In the U.S. it is very much on the rise, the shows over here are getting bigger and bigger and bigger. With them we did two legs, two U.S. legs and every show was killer. Back in 2010, that is when I first met these guys with my other band, The Damned Things, they took us on tour. That’s when I first heard the music and met the guys and became friends. Even that tour was sold out every night. It was an awesome tour. Volbeat is definitely on the rise in America. In Europe obviously it is crazy. It is just a really good feeling all around. There is a lot of excitement about this band and the new record, just good vibes.