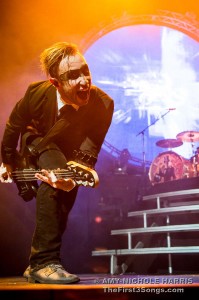 Shinedown just brings it with every new record they bring to their audiences. Their rocking sound throws us newer, bigger energy and different looks that evolves each of their members as musicians. They have been touring on their most recent album Amaryllis for the last two years and have just started their Carnival of Madness tour to complete touring on the record. It is their biggest, brightest, loudest, and most amazing tour they have put together. Amy was able to catch up with bass player Eric Bass to discuss life on tour and the close bond the band has even after all these years. To see a phenomenal night of music, Shinedown will be tearing up the PNC Pavilion at Riverbend on Saturday night at the Carnival of Madness with Papa Roach, In This Moment, and Skillet.

Amy: You guys have really been successful with the last couple albums. You have been on the Billboard charts for over two consecutive years. Did you ever expect that would happen and how do you feel?

Eric: Did I ever expect it? I always hoped it would happen I guess. You work really hard. We have this thing we say, keep your head down, stay humble, and move forward. We are blown away by the success. To be honest with you, if you had told the 17 year old me this was what was going to be happening, he’d be ecstatic. I can’t say that I expected it to happen. We wanted it to happen. We worked really hard for it. We are not surprised I guess you could say because of the hard work. It is a true blessing to be able to do what we do and have the success we have had.

Amy: The band has been touring constantly. How do you make time to write new songs on the road?

Eric: We actually don’t write on the road. We like to separate the two. We go home when we are done with this tour. We will lock ourselves away for a year and write as many songs as we can. Then, when we are done with that, we will go out and tour again and complete the process. We wrote “Diamond Eyes” on tour because it was for a movie soundtrack. That was the first experience we had with that. It worked out and everything went well with it. We work really hard when we are on tour. We are a go-go-go all day long band with interviews, meet and greets and that sort of thing. So there is really not a lot of time to get in and be creative like that. We prefer to separate the two and that creates the situation where each record is pretty different from the others because they are different times and you are not overlapping time periods. You are separating into blocks. It makes the records really interesting.

Amy: I have photographed you on your last couple tours. Your shows have grown larger and larger with more pyro and turned into huge Rock shows. How did you guys prepare for Carnival of Madness?

Eric: Well we started talking about it two or three months ago and we said, “It’s not going to be small.” That was the whole thing. We were going to make it as big as we could possibly make it. We are bringing our whole sound system with us. We are bringing our own lights. We are bringing our own pyro. We basically have carnival performers that are out with us. It is just a conscious, concerted effort to, every time, step your game up. We have sort of become known for that when we do these big headlining runs. We don’t want to disappoint anybody. People paid good money and want to see a great Rock show and that’s what they are going to get. 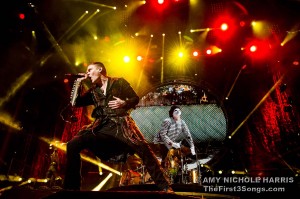 Amy: You actually have carnival performers on stage with you?

Eric: We actually do, yes. It’s going to be fun. I think everybody is going to really enjoy the show.

Amy: The first show was this weekend. How is it going so far?

Eric: We are one down. We have the second one tonight. The first one was great. Internally, we found a couple things we could do differently, do a little bit better. We are definitely going to do that. The first show was great. The crowd was very receptive. It was awesome. I think tonight is going to be even better. Then the Cincinnati show, by that time, we will be well-oiled machines and veterans.

Amy: Shinedown has a huge social media presence. Why is it important for you guys to stay connected to your fans in that way?

Eric: Because the fans are the reason we get to do what we do. We never forget that. The fans are the boss, the most important thing. The fans buy the tickets, they buy the records. I have to say and it’s going to sound cliché but it’s not meant to be, we have the best fans. Our fans are ridiculously loyal. We like to keep up with them. We actually know, you would be surprised how many fans we know. I’ll see fans at meet and greets that I will know from Twitter. We keep up with them and we know what’s going on. We like to hear what they have to say. They are going to let us know if something is not right. They will let us know if they don’t like something, if they like something. It’s a great tool to utilize as well. You get instant feedback on what you are doing. 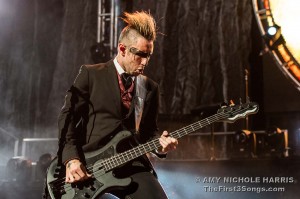 Amy: What are your hobbies outside of playing music all the time?

Eric: It’s kind of funny. I say all my hobbies become my jobs. I produce records. I do a lot of songwriting. I engineer, mix records. A lot of my hobbies have become my job. I am a golfer. I enjoy golf a lot. More recently, I have started building model airplanes. I needed a quiet hobby I can sit in my house and do. It is something I have found solace in. It may be a little geeky, a little nerdy but it is fun.

Amy: I love that song. I know it is the new single and it is out, but what is the story behind the song?

Eric: The story of the song is pretty interesting. The piano part I had for a couple years. I had been playing it in sound checks. We don’t write on the road but if it’s something someone in the band hears, “Hey remember that. Record that.” We are pretty in tune with that sort of stuff. We were out on our acoustic tour that we did on the end of our last record cycle with Will Hoge, a great singer-songwriter from Nashville. Nobody had really said anything about the piano thing I had, so I thought maybe it will be good for Will. So I hit him up and said on the next day off I want to show you this piano piece I have got and we can write a song. He gave me his number and said to give him a call. I gave him a call the day of, I called him like three times, never went to voicemail, never picked up. The next day, I was like, “I called you three times.” He said, “It never came through. I don’t know what happened.” That day at soundcheck, Brent was like, “What’s that thing you are playing?” I was like, “Man, I have been playing it for three years.” He finally woke up to it. 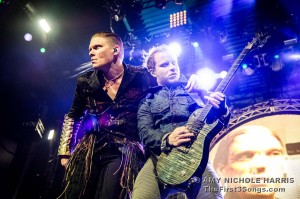 We actually had the recording that day at sound check kind of going through the song. Some of the lyrics are actually in there from that first time we ever played it through, he and I. If you fast forward six months when we finally wrote it, finally sat down and wrote the song, it happened seamlessly. We wrote it in like two hours, the whole thing was done. Lyrically, it is about the person in your life who is your best friend, your spouse or your girlfriend, your boyfriend, or someone really close to you, that person you will always be there for and they will always be there for you.

Amy: The band took a different turn on the latest album playing with the full orchestra. How did that concept come about?

Eric: We talked about how Madness had a lot of string sections stuff. We just talked while we were writing the record about how to make this record a little bigger and a little more grand. That was the first thing that came up, we need to do something with horns and full orchestra, rather than just string sections. It was fun. It was a blast to be in there to watch that stuff be recorded, watching your vision come to life was amazing. There is very little that we do that is not a conscious decision. We kind of see what we want to do next. We were talking about our next record the other day on the bus. We will probably start working on that next year. We already kind of got an idea for it of what we want it to be. It is pretty phenomenal to have this type and level of instruments on something you have worked on. You pinch yourself every once in a while because it’s so cool.

Amy: You guys have been together for some time. Are you all still friends? Do you still hang out?

Eric: It’s pretty funny we love each other so much. We all still ride the same bus even though we don’t have to. We all four of us camp out in the same place. We work out together every day. We eat together every day. We really are brothers. We have our moments of getting agitated with each other and angry with each other. There is something different that I don’t see in a lot of bands we travel with. There are some but they are few and far between. You get a group of people that genuinely like each other and genuinely get along. I can count on one hand the times I have been up in someone’s face in my band, that I have been that angry with someone. We just don’t get like that. We talk things out. If there is a problem, we sit down and we are very honest with each other. We don’t harbor any animosity toward each other for anything. “I’ll Follow You” is out right now and is a song Brent and I wrote. Everybody in the band is happy as hell about that because it is doing well. “Bully” is a song Brent and Zach wrote, and I was happy as hell that was doing well. A lot of people get caught up in the unimportant stuff like who makes more money or what’s going on with this or who’s more popular in the band. We don’t care about that stuff. It’s about the band, the entire group. We all really care about each other. We hang out when we aren’t on tour. It is really a blessing.

Amy: It is amazing you guys spend so much time together and it is still like that. There aren’t many people I could spend 24 hours a day with?