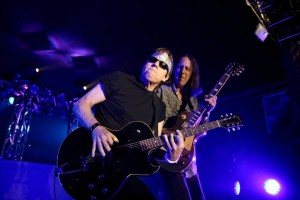 George Thorogood is a Rock and guitar legend. He has done just about everything a musician can over his thirty years on the road. He has done it all through a focused nature that lets him become a better musician with each performance. Along with his vintage 125, the only guitar he has ever played, cared to play, or even knows how to play, he has delighted audiences with a catalog like “Bad to the Bone” and “Move It On Over” he can play every night that provides a familiar comfortable performance any audience can love. Amy spoke with Thorogood about the “wild” ride through Rock n Roll and his connection with his guitar. To see Thorogood and his prized guitar, he will be playing at Riverbend PNC Pavilion on Friday night with fellow legend Buddy Guy.

Amy: Do you ever get tired of playing your hits like “Bad to the Bone”?

George: I get tired yes, but I don’t get tired of playing them. You see, we created those songs to play live. That was the whole purpose of them. I get asked that question a lot. I don’t understand it. Do artists make songs up and not want to play them a lot?

Amy: I think it is over so many years. Most of the time they say they love to play them and most bands wish they had songs like that.

George: It has always made me feel strange because I thought if you worked really hard and made an automobile like a BMW or something, would you get tired of selling BMWs? That is the whole purpose of making them isn’t it?

George: I don’t get tired of playing them. What I would get freaked out about is if people didn’t want to hear the songs.

Amy: You have been touring a lot this year. What is the biggest difference in touring now versus the 1980’s when you started?

Amy: It seemed more fun then though.

George: Why would you think that?

Amy: I think artists now are so freaked out with social media and people seeing everything and having access to people and things can get out very quickly. I think people are less likely to have fun sometimes.

George: That part of it yeah, but that part isn’t going away if you are famous. You can lose your money but you can’t lose your fame. That is going to be happening anyway. News just gets to people quicker now than it did 30 years ago. It’s the yin and the yang of the whole thing when you become famous. You have to take what comes along with it. That part is not a lot of fun. But if you quit and you stop, it’s still going to exist whether you play or not. If Harrison Ford retires tomorrow, people are going to be talking about it in some form or shape. The other part of it is a lot easier. We have better hotels. There is air conditioning. We have buses. The venues are better, better for the fans, better for the bands. It’s a business now. It’s a multi-billion dollar industry. They have put so much time and capital into the business to make it up on that level. In that way, I have survived that and I am part of it. That is something to be very proud of. Let’s face it, the club owners and promoters and everybody are not going to be interested in you unless you are going to make a profit. We are a consideration and not an afterthought when it comes to that.

Amy: Are you working on any new music while you are out on the road?

George: Not really. We are working on putting together a record that has a combination of all the originals we have done over the years and adding one or two new ones to it. It’s a project on the table at this time.

Amy: I know you are a big baseball fan. I am actually surprised you are touring during baseball season. The Reds aren’t going to be there on Friday. How are you feeling about baseball this summer?

George: That’s a fun question. I have never altered my work schedule. I don’t know how that started. I took one summer off to play in a softball league and it was about 20 games but I was active the whole time. If I took off during baseball season, I’d be broke. I wouldn’t be able to put 15 years together. It’s summertime. I have to go out and perform. There is no getting around it. I don’t know any baseball players saying they are taking off the summer because Thorogood is touring.

Amy: What is your favorite guitar to play live?

Amy: Have you ever lost any gear or had it stolen?

George: Yeah, it’s been stolen a couple times but we got them back. We finally put up a sign saying, “Stop stealing George’s guitars. They don’t make them anymore and it’s the only kind he can play.”

Amy: I’ll make a note in the article. You mention Mick Jagger and I saw the Stones live for the first time last month and it was pretty amazing. I know you toured with them and you have had many great tours over the years but what is your craziest tour story?

George: Craziest? Like mental and I need a prescription from a psychiatrist?

George: None. What’s your idea of crazy?

George: I’ve never been to any crazy parties. There have never been any crazy fans ever. The Rolling Stones are 100% professional outfit ran by Bill Graham. There is no time for any craziness. There was too much money involved. The Three Stooges do crazy things. The Rolling Stones and Bill Graham do not. Everything is professional. Everything was in ship shape or they wouldn’t still be in business now if they didn’t do that. If they did anything crazy or wild, they did it while I was not around. Sorry but I do not know where all this comes from Rock n Roll and from the Rolling Stones but when I showed up, I am the only guy that can turn an orgy into a boy scout camp. When I show up, it is clean cut and above the board all the way.

Amy: No more fun when you arrive.

Amy: They were amazing. I was blown away. I had waited so many years to see them. I am glad I finally got the chance.

George: Yeah. They are better now than ever.

Amy: I have nothing to compare it to other than films.

George: Well I do and you have to go see them now.

Amy: If you could trade places with anybody for a month, who would it be?

George: I’d like to know what it feels like to be the most powerful person in the world, even if it is only a couple of days.

George: I am a little busy with my own. I haven’t really had a chance to sit and relax and listen to any current music for the last 40 years because I have been busy with my own business.

Amy: What is your favorite guitar solo you have ever recorded?

George: Oh please, come on, the favorite guitar solo I’ve ever recorded. I’ve recorded so many I can’t even remember some of them.

Amy: I know but some people have an experience or something that stands out.

George: Every one of them.

Amy: What is the hardest part about being on the road?

George: Being away from my family.

Amy: What can the fans expect on Friday night?

George: I’m sure they aren’t going to walk out there and say “I hope George is OK tonight.” You go see the Cincinnati Reds you expect them to win don’t you.

George: Well there you go.