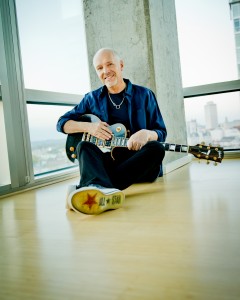 Peter Frampton is a true guitar legend. He is revered by every single one of his peers. As his Guitar Circus rolls into town this week, crowds will be amazed by his beautiful music from his catalog of 40 years of music as well as the legend B.B. King. Amy was able to catch up with Frampton in preparation for the show. They discussed how this tour concept came together and what it has been like working with one of his heroes, now on a nightly basis. For a special evening of music, you will not want to miss the show Wednesday Night at the PNC Pavilion at Riverbend.

Amy: What has been the highlight of Frampton’s Guitar Circus so far?

Peter: It is hard to say because we have had so many incredible guitar players play with us already. The list is growing every day. From the other night, Vinnie Moore to Vince Gill to Don Felder to Roger McGuinn. It is like every night is so different. Every night is a highlight with all of these amazing players. Sometimes we only have someone for one night because of scheduling like Vinnie Moore was only one night. John Jorgenson was only one night from Elton John’s band who is also a wonderful jazz artist, who was with me on my Fingerprints CD. Some nights we get one, some nights we get three, and sometimes we are lucky enough and we get Don Felder for six and Roger McGuinn for six. They are all split up and don’t happen at the same time. I can’t really pick one.

Amy: When did you come up with the idea and how did you bring it all together for the tour this year?

Peter: It was last year after my little sabbatical, my year off after the Comes Alive Tour. I was going, “What can I follow this with?” because it was a very successful tour and probably one of the most successful tours I have done in years. It was one of those things where I said I have got to do something with other artists. We had been doing shows for quite a few years now with just me, an evening with as it were. It was something I wanted to do with as many guitarists as I could, to have an opening act with a great guitar player and then have some guests. The idea was there. I sat down with my manager Ken Levitan and I said what I wanted to do. He said, “Why don’t we call it something like a “guitar circus.” I said that was great. It was fantastic. I have to give him credit. He came up with the idea and then we have as many guests as we can along the way. At that point, we decided we would try to have a three act show, which that is what it is in Cincinnati, where it is Sonny Landreth opening it up. He is not an opening act, he just starts the evening because he is a headliner himself. He is a phenomenal player and has such a great history. We have him starting the evening off for us with his amazing band and himself. The person that when we first put our feelers out of who might be interested in coming along with us on the Guitar Circus and said yes was B.B. King, which blew me away. That set the whole tone for the whole Guitar Circus because everyone said, “If B.B. King is doing it, I’ve got to do it.” It gave us great credibility right from the start. So B.B. King will come on. We played for the first time with him the other night. I got to sit in and jam with him which was a dream come true. After B.B. goes off we come on and do our hour and a half. During that period, David Hidalgo will come on, he is our guest in Cincy from Los Lobos. He has played a couple dates with us already and it is incredible. We become Los Lobos and it is phenomenal. It is just great. It is very exciting every night. It is a challenge to be that person’s band when they come on. I’ve got an excellent band so we do a really good job.

Amy: You mentioned B.B. King, who is an all-time legend. What do you talk to B.B. King about backstage?

Peter: Well I went back and saw him when he arrived in his own bus. I thanked him for being the reason why this whole tour is being successful because he was the first person to say yes. I said, “Not only is it an honor that you are on one date, but you are on nearly four weeks of dates with me, every night.” I just couldn’t thank him enough. He said he was thrilled to be a part of it. I think there is a mutual respect as guitarists, definitely my way. To be able to sit and play with him the night before last was incredible. He is going to be 88 and he is still doing it. It is absolutely incredible that he is, and we are all thrilled that he is. He is just the sweetest guy. You wouldn’t think that someone as legendary as him is that nice but he is. He is a sweet, sweet man. You can’t believe it. It is how you wish everybody could be when you meet them. He takes the cake that is for sure.

Amy: I can hear you smiling through the phone just talking about playing with him. He is amazing.

Peter: It doesn’t get any better. It is one of those moments I won’t ever forget. I am not sure I will be doing it every night. I hope so. He said I can tell him what I want to do and walk out and play. He means what he says. I am just getting to know him. It is unbelievable that we had never met before until the other night. Now it feels like we have known each other for years.

Amy: I saw you recently perform this Spring on The Voice. You went on with Terry McDermott during the finals. A lot of artists are coming out and speaking negatively about shows like this that try to make people stars overnight because they don’t have to pay their dues in some respects over the years. Do you have any feeling s about that?

Peter: I am not a big fan of those shows in general. The part that I don’t like is that it is this nationwide talent show. These people come on, and it’s their fault, they put themselves in that position to have someone ream them on national TV. I sort of cringe every time I see that, rightly or wrongly how the judge is. I have been asked to be a judge on those things. You will never see me as a judge. I would be saying everybody stays. That’s not me. I know what I like and everything and I will say it in private but I am not going to say, “You suck and get out of here” which is basically what happens. They asked me over a weekend like two days before the show if I would do The Voice. I asked them to fill me in and tell me what it was about. Then I listened to Terry and liked him a lot, all his clips and everything. I thought it was just excellent. It was a wonderful opportunity for me to go on there and do a duet. For me it was just a performance within one of those types of shows. I wasn’t part of voting anybody on or off. It was something I enjoyed doing and I think it came off really well. We got such a demand for the song we mixed it and released it as a single. So it is on iTunes as well.

Amy: What is your favorite guitar to play?

Peter: I just got my Phoenix back, that is what it has been called. It is the guitar that was supposedly lost and burnt up in the plane crash in South America in Venezuela. After having that back for a year and a bit now, it is definitely my favorite. I have other favorites but there is something about that one and the history, you know of me getting it in time to play on Humble Pie’s live record, Rockin’ the Fillmore, and everything I did in the 70’s obviously being, all my solo records. It was one of only two electric guitars that I had. To have that back, it has become my favorite again overnight.

Amy: I own a few Jim Marshall photographs and one is of you at Oakland Stadium in 1975. Do you remember that day? Obviously that photograph is iconic itself, but is there anything special about that day in California? Did that photo change you in any way?

Peter: In San Francisco and Detroit and New York, we were already pulling huge crowds just from word of mouth and the solo albums I had out, and obviously my time with Humble Pie. I think that was the very first time we did it at a stadium. There is nothing quite looking out to 65,000 people and you have been used to, I think the biggest place we had played was Madison Square Garden. There is a huge energy level discrepancy between an arena and a stadium. There is nothing quite like the adrenaline it gives you to see 65,000 people with their hands in the air shouting at you. You never forget that first time. There were many after that in stadiums but that first one was pretty incredible.

Peter: No but it has come really close. The guitar, she is the other woman always. The passion you have for music is very strong and it does come with jealousy sometimes when you prefer to play the guitar than be with the woman.