Q&A with Ann Wilson of Heart 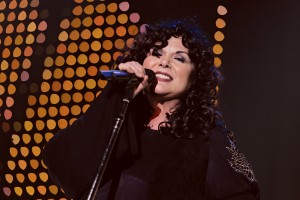 Heart was a fresh, rebellious sound when a voice was truly needed in the early 1970’s. That voice was the timeless voice of Ann Wilson. In a time when the female front woman was just gaining steam, Heart found their identity in theirs. Still to this day Ann Wilson embodies the band’s sound and message. Through five decades and several lineup changes, Heart is still the same band because the women in the front are the same after standing the test of time for over 40 years. It can be argued that Ann Wilson made it possible for the likes of Stevie Nicks and others to find their voice in Rock n Roll.

For this legacy of time, the band was finally vindicated this year as they were inducted in the 2013 class of the Rock n Roll Hall of Fame with the likes of fellow legendary groups Rush and Public Enemy. Amy had the privilege of getting time to speak with the legend Wilson. As they prepare to take the stage Saturday at Riverbend Music Center, audiences can anticipate hearing the classics like “Barracuda” but also new and fresh music, off the 2012 album Fanatic, that continues the Heart legacy. Don’t miss the finale with Jason Bonham joining them on stage.

Amy: What the highlight of your Rock N Roll Hall of Fame Induction this year?

Ann: The highlight of my RRHOF induction this year was standing beside Nancy at the podium. That was a feeling of great pride I will never forget.

Amy: What is the most number of days have you gone without playing music?

Ann: I have gone months sometimes without playing a guitar, but never a day goes by where I don’t sing.

Amy: What does your ideal day look like these days?

Ann: Sleep in late, have a great pilates/yoga workout, hang out with my kids and their kids, cook dinner, meditate, sleep with my dog nearby.

Amy: If you could trade places with someone for a month who would it be and why?

Ann: I guess I couldn’t do that. I don’t envy anyone else that much!

Amy: You have seen music recordings change from albums to 8-track to cassette- to CD- MP3 etc through the years. Do you feel like music sounds better or worse with the use of technology? 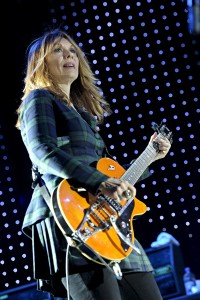 Ann: Music definitely sounds worse to my ears because of digital technology. There is a hard, brittle sound to it. Analog music sounded warmer and deeper, though maybe not as ” perfect “. Auto tune makes me crazy because it removes all individuality from a person’s voice. Everyone ends up sounding anonymous. The imperfections are where the soul is, I say leave them in. Leave in the humanity.

Amy: How did the latest tour come about with Jason Bonham? Any favorite tour stories from the current tour?

Ann: Many people saw the Kennedy Center Honors show on TV or YouTube and loved the tribute to Led Zeppelin. The management was listening and everyone agreed it would be a beautiful idea. We’ve only done two weeks so far, and it’s been amazing. No train wrecks yet!

Amy: Do you journal or take photos over the years with special tour memories. How do you document your stories and memories?

Ann: We record every night and have photographers on sight. Occasionally I will blog, but I am usually pretty wound up after a show. Maybe this will be the year I take up a journal. A person can’t count on their memory forever!!

Amy: Does it ever get tough being on the road with family? How have you handled it for so many years?

Ann: Yes the road is rough. Traveling and performing together takes a lot out of you and sometimes things do get emotional. We are lucky to have each other for support. I don’t know how I would have made it all these years without Nancy’s love, strength and sense of humor!

Amy: Are you working on new music while on the road?

Ann: My head is full of new songs at the moment.

Amy: What can fans looks forward to when the tour hits Cincinnati?

Ann: The show in Cincinnati will open with Jason Bonham’s Led Zeppelin Experience, Next will be the heart show, after which there will be a finale consisting of  about 30 minutes of Zeppelin songs with Jason Bonham and Tony Katanya joining in.