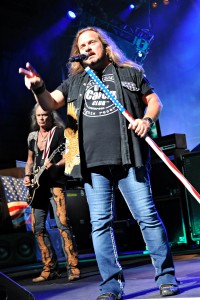 Where do you begin with a band like Lynyrd Skynyrd? Everybody has been out at a bar and heard some crazy lunatic shouting to the band on stage “FREE BIRD!!!” They are the epitome and gold standard for Southern Rock music. Even now, through the tragedy of the plane crash in 1977 to the re-formed band, they still provide electric performances every night. They still happily rock the hits of the early days like “Simple Man” and “Sweet Home Alabama,” while mixing in the music they are still putting out, most recently Last of a Dying Breed late last year.

Amy had time to catch up with lead vocalist Johnny Van Zant, who also happens to be the younger brother of the band’s original front man Ronnie Van Zant. The two discussed how Skynyrd fits into Rock music today as well as the wonderful feelings the band still gets performing every night on stage. They will be at the Riverbend Music Center Wednesday, July 24th, playing with Bad Company providing the same energy as the cast from the 70’s and showing audiences what real Southern Rock sounds like.

Amy: Do you have any crazy Cincinnati memories from the past?

Johnny: We have had so many good shows there. Years back when a flood hit, there was water in the first four or five rows. People were kind of standing in the water. I was like, “Wow these are really die hards.” I don’t even know how many times we have played at that particular amphitheater, but it has always been a good, hot, sweaty, summer rock n roll show which is how it is supposed to be.

Amy: The band has had multiple lineup changes over the years since you joined the band. How do you integrate someone new into the band?

Johnny: For us, they have to be a friend, someone we have known, someone we admire as a musician, someone we think would fit into our family. When we are out on the road, running up and down the road playing shows, you have to be not only a member of a band but, especially with Lynyrd Skynyrd, you have to be a part of the Skynyrd nation. You have to be a part of the family. Our newest member is Johnny Colt who was bass player with the Black Crowes. Colt fits right in with us. He’s loony as heck and so are we. We have a great time and love doing what the we do. I hope Johnny is with us for a long, long time. He is quite the guy. It has been awesome.

Amy: I know you guys have worked many times with one of my favorite guitarists, John 5. What was that experience like for you and have you done any collaborations recently?

Johnny: Well yeah he was on our last record Last of a Dying Breed. John is a good friend of us. We knew we were going to be good friends with John because we were in Nashville writing and our manager mentioned John and said, “You know he is a little different than you guys.” And we said, “ That’s ok, that’s no problem.” John walked in, he was just coming from a photo shoot. He had on the fingernails with his hair all up. When he walked in and I went, “Damn you are different. Damn, are you a freak or something?” And he said, “I was thinking the same crap about you guys.” We just hit it off. He is a wonderful guitar player. Not only can he play Heavy Metal and Rock n Roll but he can play the hell out of some country music which we love. I just admire his work and he is one of the most phenomenal guitar players I have had the pleasure to work with.

Amy: A lot of people are saying Rock is dead and Country music is the new Rock. Do you believe that Rock is dead?

Johnny: No. I think Country music is Lynyrd Skynyrd. I think a lot of the Country music is what we do but I don’t think Rock n Roll is dead at all. People have been saying that shit for years and years and years. Rock n Roll is dead. Then it comes back. It’s like anything else. For us we just played Houston, Texas in front of 10000 people. We played Bristol, Virginia, I think there were 14,000 people on a Sunday night. The night before last we were in Camden, New Jersey, 14,000 people on a Wednesday night. I’m sure Cincinnati is doing quite well. We are in Pittsburgh tonight. It is going to be phenomenal here. If Rock n Roll is dead and gone, man I am missing out on it.

Amy: Tell me a little bit about Last of a Dying Breed and which songs we are going to hear from that album when you come to Cincinnati?

Johnny: Well it is debatable. What we do, each night we try to think about what new song we want to put in. Right now we are really concentrating on 40 years. It’s been 40 years since Pronounced ‘lĕh-‘nérd ‘skin-‘nérd came out. It’s been our major focus to play as many songs of that record and celebrate that era.

Amy: Where do you see yourself in 15 more years?

Johnny: Hopefully alive. Hopefully playing some shows and still doing this. Doing a lot of fishing and drinking a good Budweiser and something like that I don’t know. If you want to make God laugh, tell him your plans. I never really plan too much. I just like to go along with the flow and the good Lord throws me in the direction he wants me to go or guides me should I say.

Johnny: Not at all. I am quick to say not at all. How many bands would love to have songs like that? Most bands say we would give anything to have one of those. “Free Bird” and “Alabama”, that’s the cool thing about Skynyrd. We have three generations of fans who love those songs. It is amazing to me. We are out with Bad Company right now and we are real big Bad Company fans. We are at the top of the game with these guys. From my era and a lot of other people’s era, Bad Company was the rule of the roost when it came to Rock n Roll. Paul Rogers is one of the best singers. Simon Kirke and Mick Ralphs have been around for years. It is just great to be out on the road and playing shows with good friends too. We are having a blast. We hope to do it again sometime after this tour and look forward to coming your way.

Amy: I know people use your song a lot, especially “Sweet Home Alabama,” it was the huge song with Kid Rock two summers ago. Are you flattered when that happens, excited, upset? How do you feel when someone integrates that song?

Johnny: We were actually doing a tour with Bobby when he had “All Summer Long” out. For us, hell it keeps us in the spotlight. He did a good job on it. It was a hit song for him and everybody got paid. So surely, we are like, “Can someone else use it again and again?” It is kind of funny when you think of stuff like that. Who would have thought when that song was written a long, long time ago people would still be loving it and a band from Jacksonville, Florida and what success my brother and Alan and Gary, my hat is off to them. I love keeping the music alive. It is a great thing. It’s a great thing because the song has been used in Forest Gump and various movies. Any time anything like that pops up as long as it is not in bad taste is great. It has been a good ride.