Everest is an Indie Rock band with a folk sound that is very unique in a cluttered genre. They have been able to work with many of the major players in Rock N Roll, especially developing a fond relationship with Neil Young, his recording studio producing their first studio album and hand picking the band to open for him the last several years. Last year, the band released their third studio album Ownerless. Amy spoke with band bassist Elijah Thomson about the band’s unique vision and feel, also where the band is going in their evolution. Everest will be playing the Bunbury Music Festival on Friday July 12th along side headlining acts FUN. MGMT and The National over the three day experience.

Amy: What have you guys been up to since I saw you last summer?

Elijah: We took a little break. We were touring with Neil Young at the end of the year which was really fun. We were a little beat down from a year of touring. We took probably about six months off. We did a little tour in April with Minus the Bear, so we sort of violated our own hiatus to go out with those guys. We just did a couple week run from L.A. to Chicago, so we went out there to do a couple dates.

Amy: I know Neil Young personally picked you guys to go on tour with him and open his shows. What was the highlight of playing with him? 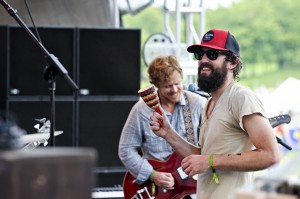 Elijah: It has been pretty sweet over the years getting to tour with Neil and obviously a total honor to be able to play with an artist of that caliber and a living legend as far as I am concerned. On a certain level, it is still a gig, you know driving and loading in and out and all that kind of stuff. I think for me personally, watching a guy like Neil night in and night out, it sort of proves that sort of mystical thing in music, what is compelling about somebody that can sustain them for so long. People are coming out in droves to see Neil and for me it is a personal study on art and what it is that enamors people with art. With Neil, I think it is primarily an honesty with his art. He will put it out there. The first song on his new record is like 27 minutes long. That’s the kind of bravery that comes from having nothing to prove and I think for them, like us, we have to understand why that is important and to find a formula that works, but also being true to ourselves and true to our own desires musically. That is a process. It has not been instantaneous, but I think we are sort of on the verge of realizing that ourselves.

Amy: Did he give you any advice?

Elijah: I think if there ever was, it was just that, absolutely do whatever you want and don’t make any apologies and don’t play it safe. It was the kind of real world wisdom that is important. It is not about playing some game. We should not be concerned where we will be classified in a musical genre. It is more about making what you feel and letting other people classify it.

Amy: You guys toured pretty consistently the past few years, do you have any crazy tour stories on the road?

Elijah: One of the main things we talked about from last year, we seemed to be pretty slippery when it came to crossing paths with law enforcement. We were slippery, we had no issues. I don’t know how we did it. We had a couple close calls but were able to talk our way out of it every time.

Amy: Are you working on any new music right now?

Elijah: Yeah, the biggest change in Everest is a slight personnel change, Jason Soda, a founding member of the band, decided to resign. I don’t know if I should say why but ultimately he needed more normalcy in his life. His replacement, I hate to put it that way, his name is Aaron Tasjan, an amazing guitar player who we met while we were on the road with Alberta Cross. He was kind of filling in for guitar and when it came up that J was going to resign, Joel and I were talking about it. I think it was a sensitive thing, who were we going to collaborate with and how were we going to take this opportunity to improve the internal chemistry. We had a really great rapport with Aaron and when we were on the road he watched our set every night. He would open the shows doing solo stuff and we would jump on stage with him and jam with him. His spirit has been really amazing since he has been playing with us, bringing a freshness and newness that we have really desired and I think interpersonally it has been good and natural. Also, the drummer chair 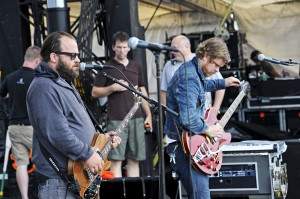 has been in rotation the last year and a half or so since Davey, our original drummer, stopped playing with us. Our drummer now is a guy named Dan Bailey, a guy I have known for years. I really respected his drumming. He is an absolutely astounding drummer. It was very easy to ask him to join. Bass players and drummers generally want to choose who they are going to play with. He has known this band for a while since I have been in it and he has been chomping at the bit to jam with us, so we are on this new plane that we have never really experienced. It is really sort of a beautiful and fun creative discovery. I am excited to bring this to Cincinnati. There is a great spirit going on. The plan right now is to finish out this summer touring with them, a couple weeks in July and a couple weeks in August on the West Coast. Then we are going to go back in the studio. The sound checks for our shows have gone into much more, I don’t like the word jamming, so we will say spontaneous musical landscapes. It is something we have been wanting to do for a long time and it is really amazing to go on stage and just not have it all pre-programmed, even calling out set lists on the stage, stretching songs out, kind of taking our time with things, letting things be different night after night and really encourage our creative flow together. We are really excited about getting in the studio and experimenting with this.

Amy: What is your favorite bass to play?

Elijah: I play a Gibson Les Paul Recording Bass 1973. I have been playing it exclusively for about 12 years. I do own several basses. The first bass I ever had was a Gibson Les Paul recording bass. My Dad was a bass player and he gave it to me. It was kind of his junker bass and I didn’t even like but it was something, it sounds really stupid and mystical, because it was the bass I learned on and I kind of wore it out and it was an awkward bass, but I was always coming back to it because it was familiar. I was playing with a guy named Richard Swift, still do, a really dear friend. Right around when we first started playing together, he said, “That is the raddest bass I have ever heard. You should only use that bass when you are playing with me.” I was like, “OK no problem.” I basically decided that was my thing and I was going to stick with it. I haven’t played any other bass for years and years except in a studio, and even then it is only one song, maybe.

Amy: Did you always want to be a musician?

Elijah: Like I said my Dad was a musician and so I grew up on the road and around music. My uncle owned a studio, still does, and we still work out of there a lot. I have been recording bands since I was 17 years old and have been playing music since I was 12 years old, always had guitars around. When I was a little kid I thought I was the talentless one in the family because I didn’t pick it up before the age of 10. I eventually found my way. This was always what I was meant to do in a way. 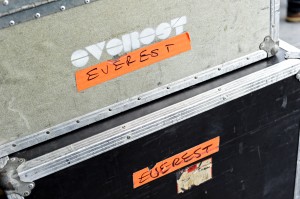 Amy: Somebody the other day said that the best way to become a successful musician is to not have a backup plan.

Elijah: I’d say so and I’d say most true artists would rather downgrade and live in a shack and still be doing what they are passionate about. It really plays into the artist mentality. I am no spring chicken so I certainly decided I was in for life. I don’t have a retirement plan. I don’t ever want to stop. This is what I do. I get into other things outside of music so it is not a total obsession. I found a way to make it this far. I don’t know why that would change in the future. If it does, it does and I will figure it out. This is what works for me, there is no backup plan.

Amy: Where did the band name come from or originate?

Elijah: The story, I wasn’t in the band when they named it and maybe I wouldn’t have picked that name, but that is for another conversation. From what I gather, Russ and Jason had named their studio Everest Recordings because of a pack of cigarettes that Geoff Emerick had, he was an engineer on a lot of the Beatles stuff, and supposedly Abbey Road was originally going to be named Everest and they were going to do a photo shoot in Nepal. It became a logistical nightmare and as the legend goes Paul or somebody said let’s shoot a picture out front and be done with it. So the name Everest has significance to them however it is sort of a common thing for something to be named. It is hard to Google something like that. That is something you have to think about nowadays and maybe it gets lost in the shuffle a little bit. That is the story of the source of the name.

Amy: What can the fans look forward to at Bunbury seeing you guys for the first time?

Elijah: As I said earlier, as a band we are really relaxed and comfortable. Every new show is an adventure. Every show we have had with this lineup has been over the top amazing. I guess what fans can expect is the unexpected. They can expect to see some sort of fine but not some self-congratulatory musicianship, people making themselves vulnerable in front of people and making up stuff on the spot and really trying to live in that spirit of Jimi Hendrix in Zeppelin and the kind of feelings those shows had when it was a beautiful thing of stream of consciousness. I think that is something rarer these days in music. I am happy and proud to be in a band that values that part of live performance.