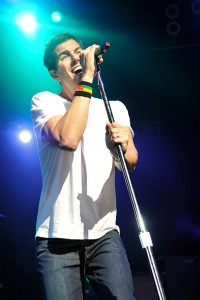 311 has been bringing an intense combination of rock music to audiences for 20 years. They last released an album in 2011, Universal Pulse, which is the band’s tenth studio offering.  They are known for their high-energy marathon shows sometimes with set lists reaching over 60 songs. Their show will hit town on Friday night as they come with their annual Unity Tour with Cypress Hill.

Amy was able to have a rapid-fire Q&A session with the band’s lead singer Nick Hexum, an original member of the band. Without Hexum’s guidance and foresight, the band may have never reached the heights that it has achieved, as the band released its first three studio albums under his own personal record label. The band has been intact for the duration, with only DJ S.A. Martinez being the only current member who was not on the original roster.

311 will bring Unity to the Riverbend Music Center on Friday July 5th. It is a show that will have it all from the nostalgia and great beats of Cypress Hill to the in-your-face high-energy fusion of Rock and Hip Hop with the night’s main attraction.

Amy: You guys have been playing shows in Cincinnati for over 10 years. Any crazy or fond Cincinnati memories from the past?

Nick: Always great crowds in Cincy!  There seems to often be a heat wave when we play there.  Which is great for us because people take their clothes off and rock out.

Amy: Who would you like to trade places with for one month?

Nick: Too much caffeine!

Amy: What made you decide to start the 311 cruise?

Nick: We have always liked combining destinations with our shows.  That started with 311 Day. Playing shows on the high seas and on a private island was a perfect fit for us!

Amy: What are some of your favorite cruise memories?

Nick: I dressed up as a ninja and blended with the fans on costume night.  I entered the costume contest and didn’t even make the first cut!  It was great to experience the 311 scene from the other side for a night.

Amy: Last year you launched Live311. Why was it important for you to make live shows available for fans?

Nick: People have been trading our shows (with our blessing) for years.  We just wanted to make it more convenient and better quality.

Amy: You have a huge fan following of all ages. How do you maintain and continue to grow your fan base?

Nick: We do our best keep the albums creative and exciting and we put a ton of energy into our shows.  The crowds keep us energized.

Amy: How do you choose acts to go on the Unity tour each summer?

Nick: We pick acts who are going to get the party started right.  Cypress Hill and G. Love will be great this year!

Amy: What is the secret to keeping the band together for over 20 years?

Nick: Be ready to not get your way.

Amy: What can fans expect with the show in Cincinnati?