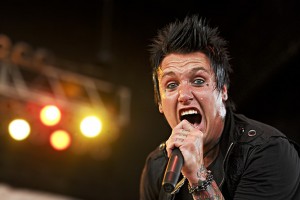 Papa Roach is a Rock band that hit the scene in 2000 with their most successful studio album Infest. Six albums later, they are still headlining tours and festivals across the country including this weekend’s Rock on the Range in Columbus. Amy was able to catch up with the man behind the music Jacoby Shaddix, the lead vocalist. The two discussed his hard times and redemption that led to their most recent album The Connection released late last year. They will be playing the Main Stage Saturday afternoon getting the night ready for Three Days Grace, Stone Sour, and The Smashing Pumpkins.

Amy: What is your favorite Rock on the Range memory?

Jacoby: Shit man, coming in headlining the second stage and utterly fucking demolishing it and being the only band asked back the next year to play the Main stage and crushing it again.

Amy: If you could trade places with anybody for one month who would it be?

Jacoby: I just want both of us to live our lives in each other’s shoes for a month. I think we both would learn a lot. I know that it is not the super mega-kick ass rock star answer but that is some real shit.

Amy: I know you wrote the last album through some of the toughest times of your life. Are any of the songs hard to play for you personally?

Jacoby: No they are just really good reminders. It is like I had to re-calibrate my life and re-focus myself on what my priorities were in my life and what was important to me and where I wanted to put myself five years from now and ten years from now. All the decisions I made in the process of making this record I believe are some of the most important decisions that I’ll make in my lifetime. I think the songs are real good reminders of that desperate place that I once was.

Amy: Well my favorite song on the album when it came out was “Where Did the Angels Go”…

Jacoby: We had a number one Rock track with that song which was fucking awesome.

Amy: Can you tell me the story behind the song?

Jacoby: As we were making the record, me and my wife had split up at that time and I was strung out again, it is no secret that I have substance abuse issues, and I was caught up again and I finally decided that enough is enough. I had to stop and that just utter desperation of hanging on to life by a thread and just feeling completely alone and so broken and not really knowing if I was going to be okay. I just finally realized how much my demons ate me alive and it was time to get myself back and that is where that song came from, utter desperation. 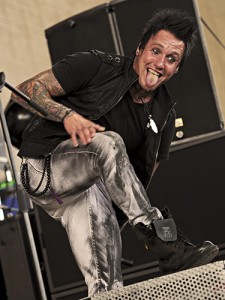 Amy: Is it hard to be on the road and stay sober?

Jacoby: Not this time around. It used to be really hard. I have a network of sober musicians I stay really close with and I have a support group through that. It is finally clear to me in my life I can’t fucking drink, I can’t do drugs because it eats me alive. I am finally on the road enjoying my life. I faced a lot of demons in the process of getting sober again and I finally put a lot of stuff to rest. I am trying to work on being in the moment, like some of that Buddhist type culture philosophy, if I am not here now then what is the point? If I am not feeling the moment, then what is the point of my life, just focusing on that, my spirituality makes all this other stuff that goes on out here on the road way more tolerable and way more fun.

Amy: Have you ever had an experience that led you to believe in angels?

Jacoby: I don’t necessarily have a grasp on the idea of angels. I have an understanding of people that have come like saviors in a sense, people that have been sent to me by my higher power to show me and guide me out of the darkness. I had to be broken down to realize I needed help.

Amy: People have shown up at the right time?

Amy: If you could ask one question to a psychic about your future what would you ask?

Jacoby: I wouldn’t ask anything. I wouldn’t want to know. What do you want to know? Are you going to live different or some shit? I’d rather let it be. Let the future be what it is going to be.

Jacoby: Perfect day, wake up next to my wife, sex right off the bat. Then go downstairs and cook breakfast for my kids, take them to school, go for a run, dance with my wife, go fishing with my brother-in-law in the bayou swamp, stretch out and warm up, play a Rock n Roll show, then fall asleep next to my wife. That sounds pretty fucking kick ass.

Amy: I know your songs that you write are very autobiographical about what is happening in your life. Have you considered writing a book or a memoir in the future?

Jacoby: Oh definitely, that is something I am going to definitely do in my life. 100 percent.

Jacoby: No immediate plans but I have put pen to paper. It is something that I can craft as I go along.

Amy: What can the fans expect this weekend at Rock on the Range?

Jacoby: A fan that is on fucking fire. We have been doing these festivals, May is a big festival month and we have been fucking annihilating audiences. We just devastated Carolina Rebellion, just ripped that shit up, we had a great show. Fort Rock in Florida, Rockville down in Florida. Memphis in May was awesome at the Beale Street Festival. That was rippin’. I just feel like we are tuned up and primed for these big festivals. I have to say all these other bands bring your fucking A-game because P Roach is coming to town and we have come to rip it.

Amy: Memphis was awesome. I saw most of the set. It was great as always. Smile for the camera Saturday and I look forward to seeing you this weekend.

Jacoby: Fuck yeah. Cool. We will see you Saturday.