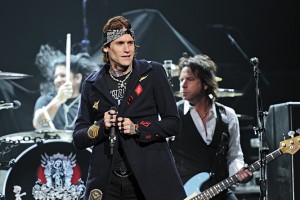 Buckcherry is a hard rock band that has been epitomizing Hard Rock since the late 90’s. As they have begun touring on their sixth studio album, Confessions, they continue to build a great and energy filled set list behind crowd favorites and major hits “Crazy Bitch” and “Lit Up” to their most recent single “Gluttony”. Behind the band and the music is lead singer Josh Todd who puts the words into their powerful music. Amy had a chance to speak with him in preparation for their set at Rock on the Range next weekend. Buckcherry takes to the stage Friday night alongside Hollywood Undead, Cheap Trick, and Korn.

Josh: One year we were there performing “Lit Up” or “Crazy Bitch” I can’t remember and a guy in a wheelchair started crowd surfing. That was a pretty memorable moment.

Amy: You guys just came off a tour with Kid Rock recently which is a great match. What was your craziest tour story?

Josh: Surprisingly it was a pretty tame tour. We didn’t have too many backstage parties. The coolest thing we did, Bob, Kid Rock, invited Keith and I to his place in Alabama. We got to go and do some skeet shooting and eat some barbeque. I had a lot of deer meat which I hadn’t had in a long time, a lot of deer jerky. So that was a lot of fun.

Amy: I was just covering the Kid Rock cruise covering it and he was singing “Crazy Bitch.” It was  cool moment, one of my favorite songs with him singing.

Josh: Yeah. I don’t know what to think of that. I’m flattered you know, but it is kind of strange since we were on tour with him. I think it is cool because he loves the song.

Amy: I want to talk about the record a little bit. I know Confessions is loosely based on the seven deadly sins. Which sin do you think is the worst?

Josh: The worst or the most hard to manage?

Amy: Either is fine?

Josh: Probably lust, especially when you have been in a rock band since you were 15, you know, it is something that comes up a lot.

Amy: I know “Sloth” was written about your experience with your Father’s suicide. Is it ever hard to perform that live?

Josh: I have never performed that live. We are working on it right now. We have six records. We have 80 some odd songs to really sift through. The songs we have performed off Confessions so far are “Wrath” “Gluttony” “Greed” “Air” and “Nothing Left but Tears.” We will get there eventually. I don’t think it will be hard for me because I just got a lot of great feedback from a lot of people who really connected to that song. That makes it a lot easier for me. It was real tough to record, but I think now it will be alright.

Amy: Are there any habits you would like to break?

Josh: Yeah. I struggle with sugar. So yeah, not so much sugar.

Amy: I know your songs that you write are very autobiographical. Is there anything you have regretted writing about in any of your 80 songs?

Josh: Since I write all the lyrics, it is kind of therapeutic for me to get out what is going on inside of me and somehow make it where a lot of people can relate to it. That is the challenge of the songwriter to take a piece of your personal life and the lives around you and try to create a song where lots and lots of people can remember. That is the fun of it and also the challenge of it all. 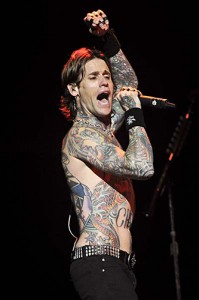 Amy: Is there anybody you would like to trade places with for a month?

Josh: Yeah, I would like to be Kyle Busch for a day.

Josh: Yeah, I race fast go carts. I have a race cart at home. I race that as much as I can. I did a NASCAR experience out here in Fontana and that was a lot of fun. I have always wanted to race an oval track race in a stock car. That would be amazing.

Amy: Can you tell us what the fans should expect from your set at Rock on the Range?

Josh: They can expect what we always deliver, their money’s worth.

Amy: Are you going to be performing any of the new album?

Josh: We will be performing “Gluttony” “Wrath” and “Nothing Left but Tears” which is going to be the new single. Plus we have to get to a lot of other songs. I don’t know how long our set is but depending on how long our set is, we have been doing “Greed” recently and it is really great live now.