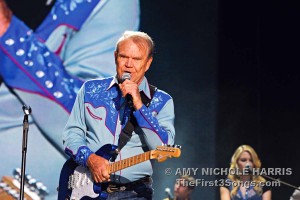 Glen Campbell is truly Country music’s “Rhinestone Cowboy.” He represented the genre as its premier star in the 1960’s and 70’s. This was culminated with the presentation of the Lifetime Achievement Award and moving tribute at the Grammy’s this past year. He will always be known for his nationwide number one hits “Summer Nights” and “Rhinestone Cowboy” in the 70’s. Campbell is now out on his “Goodbye Tour” with his family after his Alzheimer’s diagnosis in the summer of 2011 has limited his ability to perform.

Amy was privileged to have the opportunity to speak with Campbell about changes across music from when he started and how close he stays with his family on tour. Campbell will be at the Taft Theater in Cincinnati on Sunday November 11th. It will be your last chance to see a legend of the music business inspiring all in attendance as he entertains and moves forward fighting a debilitating disease.

Amy: How did you choose songs and artists to collaborate with on “Ghost on the Canvas?”

Glen: Julian Raymond is my producer. He found the majority of the material. However, he kept notes of things I said or did and some of this material makes its way into the album. “There’s No Me…Without You” is an example of this.

Amy: What has it been like to see the changes in music technology from record to eight-track to cassette to cd to IPod? Do you think music sounds better or worse with the new technology analog vs. digital? Do you use protools? 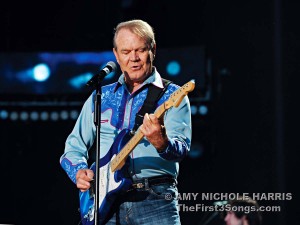 GC: It has been wonderful to see all of the technological advances with recorded music. I think the music sounds better with the new technology. I don’t personally use protools but I am sure my producer does.

Amy: You are highly autobiographical in your songs about your life. Do you regret ever sharing any of your stories through your music or songs?

GC: I have no regrets about the autobiographical songs I recorded.

Amy: Are your children still on tour with you? What is the best part of having them on the road with you?

GC: My son plays drums for me. Shannon is on guitar and Ashley plays keyboards and bass. It’s wonderful sharing the stage with them. I love it. They are terrific musicians in their own right. The best part of having them with me is that our whole family and my wife Kim are all together and doing great shows which people have warmly embraced.

Amy: What is your favorite guitar solo on any recording that you have done?

GC: One of my favorite guitar solos I recorded was for Frank Sinatra on his “Strangers in the Night.” I also like my guitar solo on “Wichita Lineman.” Jimmy Webb never finished the song so I just filled the hole with the guitar solo.

Amy: What is your favorite guitar to play? 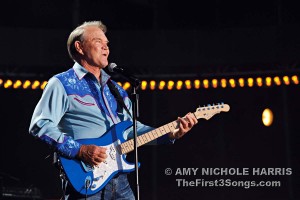 Amy: What is the longest time you have gone without playing guitar?

GC: I play every day.

Amy: Would you ever consider playing with a Beach Boys reunion?

GC: I would not want to do a Beach Boys reunion at this point. They just celebrated their 50 years together with a big tour. I think that more than covered it.

Amy: How has music helped you cope or deal with your Alzheimer’s diagnosis?

GC: The music has brought me much joy and comfort.