Jackyl in Cincinnati on Friday: Interview with Jesse James Dupree 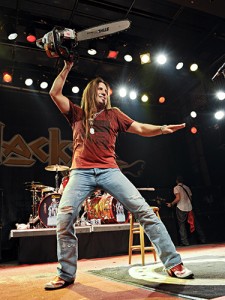 Jackyl is a Southern Metal band led by one of the most charismatic front men in American music in Jesse James Dupree. The band has been making the rounds since the early 90’s but have gained their biggest fame with Dupree appearing regularly on the TruTV show Full Throttle Saloon. He also has gotten great fame out of turning a chainsaw into a musical instrument with it being featured prominently in most of their most famous songs.

Amy was able to catch up with Dupree again this week to preview their upcoming homecoming to Cincinnati. The two discussed where Jackyl stands in today’s Rock n Roll landscape and their new album Best in Show. They will be performing on Friday night at the Inner Circle in Cincinnati.

Amy: I think you are still out on tour with Nigel correct?

Jesse: No, Nigel is not on this date with me. I have a band called Wayland that is opening for us and they are doing really great. They are getting a good bit of airplay on 96Rock and I am proud to have them on the run with us.

Amy: I have been listening to the new record Best in Show and I think “Horns Up” is my favorite song. Can you tell me a little bit about that song and how you put it together?

Jesse: It came about with Roman the bass player, obviously you can tell that song originates from that bass groove. Roman came in and said, “I have an idea but don’t know what to do with it though.” We basically stopped everything and we said “Let’s hear it,” because when Roman says he has something going on it is usually pretty interesting. So we stopped everything and he started this looping, playing it round and round, and then I picked up the guitar and started grabbing the soft beats with it and choking through, and next thing you know we had a really cool groove going. So we laid that down so we wouldn’t forget what we had. I actually got up and went for a run the next day and it was playing over in my head, and it seems like it was one of those songs that every now and then you come across something that writes itself. That one, all the parts fell together, even the gang vocals part, it has that old Sly and the Family Stone type of gang vocal you know, “Everybody grows…” So Roman and I got up to the microphone and did it and sounded like him. We laid down the idea and that is what ended up being on the record because it had such a natural flow to it. It was one of my favorite songs too. It has such a fun energy to it. I think our record is non-portentous in a sense. It is just a celebration of the fundamentals of Rock n Roll.

Amy: I have been a Jackyl fan for a long time. I have talked to you over the years and seen the shows. Have you ever had women approach you that are offended by some of the lyrics?

Jesse: I really haven’t. Can I imagine that within my lyrics that I have offended lots of groups or whatever? At the end of the day if you are analyzing the music that close, you are missing out on the essence of what it is all about. In Rock, some of these artists are so self-righteous and self-proclaimed geniuses and Rhodes Scholars or whatever, I don’t subscribe to that. I think music is something that should move you and excite you. I think Rock music should be considered right alongside going to see a movie, whether it is a Comedy or a Drama or a Horror movie, whatever the case may be. I think it is just an expression of a vibe and blowing off some steam. How many people work their asses off for 40 hours or more a week? I don’t think they want to stop in Rock n Roll to have other issues to be upset about. I think they dial in to something that is like going to see a great movie of a different genre. It is about an escape. Anybody that is looking for music to cure a rare disease or something needs to be re-aligned. I’ll just tell you this, I’ll leave it to Bono and U2 to go save the world in that respect. I just want to provide some sanity for people when they blow off some steam.

Amy: Last year that the Flaming Lips broke the record for the most concerts in 24 hours again. Would you guys ever try to do that again?

Jesse: The record, if you look at it, the record they broke is something else. I think our record still stands. We did 21 shows in a 24 hour period and we did 100 shows in 50 days. I think they did a certain amount of shows in certain states. They added something more of a twist to it. At the end of the day, it is just something we did to validate our work ethic. If we are going to be out there, we make it stick. 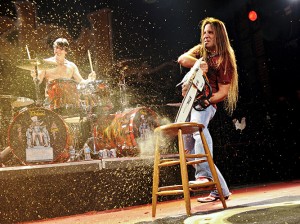 Amy: Since I saw Jackyl last time, you had your motorcycle accident last Fall. Has that changed your views on riding at all?

Jesse: HELL NO.  I was riding all day yesterday.

Amy: It is so scary to me. I know people love it, just love it. I talk to people all the time and they have had accidents just like you and they say they would never give it up.

Jesse: Nah, hell if I quit riding today, I would probably get run over by a train tomorrow. You can’t run off and be scared of life.

Amy: You guys also did Throttle Fest this Summer in Kansas City. What was the highlight of that for you?

Jesse: We were shooting the Full Throttle Saloon fourth season. The TV show has been a blessing as far as kind of sharing the lifestyle we celebrate every day.  It is the number one rated show in its time slot, and we are very, very proud of the success the show has had. Bruce Chappell is a big part of that TV show. At Throttle Fest, we ended up doing some really cool things with the Full Throttle brand this year. We took it to a whole new level that I don’t think anyone will expect. It is going to be a pretty interesting season for sure.

Amy: That was one of my questions actually, what can we expect from season four?

Jesse: You know that bigger is better and I will leave it at that. 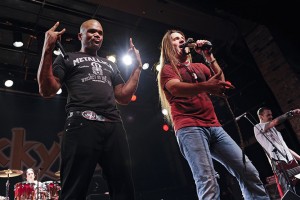 Amy: I actually had the privilege of seeing Run-DMC re-unite live this summer for the first time in a long time. I wasn’t sure if you had any thoughts on that. I know you are friends with Darrell and he is a great friend of yours. Were you excited about them re-uniting?

Jesse: I was proud for Darrell. It was something that meant a lot to him to be able to do that for the fans. They have had their issues with stuff as far as performing together. It is good when that can be put behind them and they can get out there and mix it up. I just love him to death and anything that excites him, I am proud for him.

Amy: Going back to the album for a minute, what made you choose to cover “Cover of the Rolling Stone” on this album?

Jesse: I just felt the tongue-and-cheek aspect they wrote that song. I don’t think they (Dr. Hook & the Medicine Show) would have ever expected to be on the cover of Rolling Stone so they wrote that song. I think Jackyl has a lot of that cynical, fun outlook on things, not cynical in a negative way. I think with Jackyl, we scoff at being the whole critically-acclaimed thing. It is kind of a joke. I don’t need Rolling Stone magazine to validate Jackyl. The fact we are going to play a sold out room in Cincinnati, Ohio validates Jackyl. The fact that people come out and support us. I don’t need Rolling Stone or any other critic to validate us because every night we hit the stage and everybody that comes to support us validates us, and shows that the core and what the heart of Rock is all about. It is not about a critic or a magazine. We did it with a fun twist and kind of made a couple other influences into it and even used the chainsaw on it. It is an appropriate song.

Amy: You guys spend a huge amount of time in Cincinnati and I know you have a huge fan base here. What can the fans look forward to this week?

Jesse: We are celebrating the release of this new album and we will be playing some of the new tunes for everybody and looking forward to doing it. At this point and time it is more like a family reunion. We normally come around this time of year and we look forward to it every year. If that place went out of business, we would still have to open the doors up every year about this time to do a show.