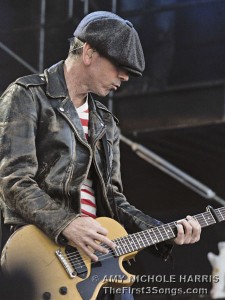 Social Distortion is a Punk band who gained the height of their fame in the late ‘80’s and early ‘90’s. They have seven studio albums leading up to their most recent “Hard Times and Nursery Rhymes”. The band is known as a touring band (sometimes at the expense of making new music). With only a brief hiatus in the mid 80’s and early 2000’s, the band’s lineup has been fairly consistent for the last decade.

Amy was able to catch up with rhythm guitarist Jonny “2 Bags” Wickersham in anticipation for the beginning of the new tour. They will be performing at Bogart’s on Saturday night and will surely wow audiences just becoming familiar with Punk music all the way to their legion of die hard fans.

Amy: I know Mike has said in the past we won’t have to wait seven or eight years for a new Social D record. Are you guys working on new music right now? How is that coming along?

Jonny: In a perfect situation we would love to get a record out sooner than we have been putting them out. I don’t know that it looks like it will happen real soon. We have been really busy touring the last couple of years. As far as new material there are always new songs in the works. We will work on them at sound checks and rehearsals. When it comes time to get serious to put a record together, the songs that stick in our minds are the ones that are the best stuff and they typically make the record. We will finish it up. We will see. Conceivably we can get together and start really getting serious in the beginning of next year and have a record to follow shortly after that. It has to feel right. I have always felt it is a good thing not to rush records. I know that people like to see a record come out on a certain schedule with bands, but it is also good to evolve a little bit as people and as a band in between albums.

Amy: You spend most of the time as a touring band on the road. Do you ever write down the tour stories or keep mementos from the tour to remember them all?

Jonny: I have never been a big journal keeper or anything like that. I don’t. Certain stories definitely do stick in your mind but not really.

Amy: What current music or music you are listening to right now is currently inspiring you?

Jonny: You know what a really great record is, the new Hot Water Music Record, have you heard that?

Jonny: I have been listening to a lot of that in my car.

Amy: From your standpoint, what are the characteristics that make a good Social D song?

Jonny: I would have to say a good riff and a good lyric that is poppin. You can’t go wrong with a good lyric. You can try to stretch that a bit, not just stay with our formula as a band. We have a different division of sounds with the band. We are not trying to re-invent sound in an extreme manner or anything but it is good to try to mix it up. I am hoping in the future, in the stuff coming up, we can do that and re-visit some of the earlier stuff.

Amy: We are heading into a critical election year. Ohio is a crazy place to be during this whole thing. Do you guys have any political views or support for any of the candidates?

Jonny: Well I am going to vote for Obama and hope for the best.

Amy: What is the worst job you have ever had?

Jonny: I don’t know. I had a job at the Orange County jail once a long time ago. We had to cut the bunks down from three bunks to two and carry them all out to the loading dock and get them out of the jail. Any job where you are locked up is not a great job. I had so many jobs growing up. I started working in construction fields at a really young age because where I come from that is just what you did when you got to the age of going out to get a job, try to get a construction trade. I have also worked at Carl’s Jr. and Burger King as a teenager and neither one of those jobs lasted more than a couple weeks. I have worked as a stagehand. I have worked in an Art Department building sets for film production. Those are cool jobs. I really liked the Art Department work. Any job that anybody could have at this point is a good job is kind of how I feel. I definitely never want to think I am beyond any kind of work. You never know what is going to happen in life. There are times where being able to get any job is critical for you.

Amy: Do you have any scars?

Jonny: I have a scar on my upper leg.  When I was a little kid, me and a couple friends built this bicycle Motocross track on a dirt lot by our house in our neighborhood. We went out and worked really hard with shovels and built this really cool track and the enemy kids down the street, who were our nemesis, came over one day when we weren’t there and totally ruined our track, kicked in all our berms and jumps and trashed it. So we went down the street  where they had built this really shitty tree fort that was like three stories tall off the ground into the tree. We went up there and we started hammering at it, we brought sledgehammers over and we started bashing in their tree fort. The stupid thing on our part was that we started on the bottom and climbed up to the next level and up to the next level. We were breaking this tree fort apart and we were way up at the top and the thing collapsed. I fell and my leg got clipped up on a nail. It ripped my leg open so I have a scar. I have a bunch of other scars too.

Amy: What is the last thing you do before you go to sleep?

Jonny: Well it depends. Turn out the television if I have been watching the television. I don’t always watch TV at night. Sometimes I do. If I am on the bus on the tour, I listen to music on my iPod. The last thing I do is turn that on and I usually fall asleep listening to a record. Then I have to wake up and pull the headphones off and fall back asleep. If I’m reading a book, close the book and turn out the light. It can be one of many different things.

Amy: My last question is what is the best guitar solo of all time, probably the hardest question?

Jonny: The best guitar solo of all time, geez, I may have to get back to you on that one.