Q&A with Jonathan Cain from Journey 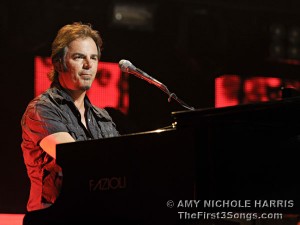 Journey can only be described as 70’s and 80’s Rock legends. But the band is not done yet. They are back with their 15th album, Eclipse, released last year. They are currently out on tour with other hit makers Pat Benetar and Loverboy. It is amazing how their music stands the test of time and how crowds still react so emotionally to their catalog of hits as well as their new music selections.

Amy was able to speak with keyboard player Jonathan Cain who is now in his fourth decade with the band. The two discussed how he was influenced to write one of their biggest hits as well as how the band stays relevant in today’s ever changing music landscape. Journey will be coming to the PNC Pavilion at Riverbend on September 21st.

Amy: You guys have been touring on the Eclipse CD for the past year. Are you guys working on new material yet?

Jonathan: No, we are just settling into the touring aspect of things right now. We worked pretty hard on the last one and thought it was time to focus in. I recently had a child and Neal has been going through all his things with Michelle. We have been busy. I just opened a new studio in Nashville called Eviction Sound. We have been focusing on all the stuff we have to do. It’s a balance deal. We’ll start working on new music eventually.

Amy: You mentioned some of the personal issues with Neal and Michelle. Has any of that gotten in the way of the band’s activities?

Jonathan: No. Not at all. They are getting through it and still in love. It’s all good.

Amy: Any fond Cincinnati memories from the past?

Jonathan: Fond Cincinnati memories? I have had some nice encounters with the fans down at the hotel bar there; closing the bar there would be the response. I do enjoy going to the ball games as well. Cincinnati always has a pretty good baseball team.

Amy: I was recently covering the CMT Awards in Nashville and saw the performance with Rascal Flatts. How did that collaboration take place?

Jonathan: The Rascal Flatts thing came about because we have a mutual friend. I play golf with one of the guys who produces the CMT Awards. He asked me one time on the golf course, “Who do you think Journey should do a Crossroads with?” And I said, “Honestly I think Rascal Flatts best fits with the sound Journey does,” and he agreed. We talked to their senior management and the rest was history. We will probably do a Crossroads together at some point.

Amy: I couldn’t get the song out of my head for four days after that night.

Jonathan: It’s one of those hummers. Every band needs one.

Amy: My favorite Journey song ever is “Faithfully.” I know you wrote that song. Can you talk me through that process to put that song together?

Jonathan: Basically, the song was written on the road. I was in Saratoga, New York, in upstate New York. We had just come off the bus and I was feeling a certain way watching the crew take the stuff down every night with the riggers and the roadies. I felt they needed to have a song and same with us. We all miss our family the same way. I don’t care who you are in this business, you still sacrifice something to be out on the road. It’s something I wrote for all of us. It’s a good ol’ Country song that turned out to be a big ol’ hit. Steve Perry actually wanted that on his solo album and I declined. I said, “Journey or bust.” It was the last song we recorded on the Frontier album back in ’83. We never even rehearsed it. That was live in the studio. That was the third take. Steve put his signature vocal on it. I was thrilled to have penned that song, then we played it live and the fans came back with “I’m forever yours, faithfully.” They turned it around and it was pretty cool.

Amy: I have asked other artists about hits like that and they say typically, the hits come out quickly normally. Was that the case with that one?

Jonathan: Yeah, I wrote that in a half an hour on a napkin. It was very quick in the room. I woke up and I had started it. I wish I still had the napkin. I don’t have it. Then there was the keyboard I had on my bed I used to bump around ideas on. It was one of those Casio keyboards you just take in your suitcase. When I got to the gig, I got a real piano backstage at the Saratoga Performance Arts Center and sort of flushed it out. The first time I did the demo, I was working with Keith Olson back in L.A. and he let me record it just by myself and that was what I played for everybody. He played it for the girls from Heart. He said Nancy cried when she heard it.  I thought that was a good sign. I guess they liked it.

Amy: I saw on your website that you share blogs and journal entries. Have you kept journals all through your touring years?

Jonathan: No, I should. I sort of dropped the ball on that one. I am getting inspired to write a new one. A lot has happened since the last one. I want to update the fans. It just may take on the highlights. We have just had this movie released Every Man’s Journey. We debuted it at the Tribeca Film Festival and San Francisco Film Festival. It’s a documentary that was made by a Filipino lady that heard about Arnel joining our band. So she came out on our tour. She spent her last four years following our buses around, coming to rehearsals. So they finally put a movie together. That was really exciting to attend and it really helped him solidify himself as he has evolved as an entertainer and a star. You see it actually happen, I think they are going to release it next Spring. It is really something. It is a neat story. We are proud of him.

Amy: I find it very inspiring you welcomed someone new into the band and are so supportive of them moving forward.

Jonathan: It was kind of a no-brainer. The guy can sing better than anyone can sing it. We went, “You know what. Let’s go with this guy.” We loved his heart. We loved the man as a father. The whole package. He makes us better. He is great.

Amy: I saw in your journals you were blogging about South America and other places. I wish I had written down all my travel stories over the years. What has been your most memorable travel story recently?

Jonathan: Actually the European thing with my son was really great. We went to Europe and he went on the road with me and we got to go to some pretty incredible places. We played golf together in Scotland. There was this incredible experience, everything from the Eifel Tower to the Royal Palace of Stockholm and to see it with your son is pretty darn cool. We went to San Salvatore, about a mile up and you look out from the Swiss Alps and it is breathtaking. I have to say that European trip was at the top of the list.

Jonathan: I probably drink too much wine.

Amy: Any regrets over the years.

Jonathan: No. I believe life is perfect. You live to learn from your mistakes and grow. If you regret something then lessons haven’t been learned. Everything you regret is something you haven’t accepted in life. Mistakes are chances to grow, chances to understand a deeper sense of who, what, and how you relate to the universe.

Amy: Do you think Rock music is a dying art?

Jonathan: No. I don’t. It is a niche now. We are a niche now. We aren’t as popular as we were but if you come to our show you can see it is alive and well. Just because the media has stiffed us doesn’t mean we aren’t out there in our own way. We are quietly playing for thousands and thousands of people. We have sold 800,000 tickets. It’s crazy. It’s a lot of people. It’s a good show. Pat Benetar is on the bill. We have Loverboy opening up when it is the three of us. We are having fun. We are keeping things alive.

Amy: Are you a political band? We are in a critical election time. Are you planning to back any candidates?

Jonathan: No. We stay out of that. If they want us to play and pay us a bunch of money, we will play for them.

Jonathan: We would. The bottom line is we have a lot of fans on both sides. That’s my feeling. I’m tired of Republicans, I’m tired of Democrats. Let’s just get the people together and get shit done instead of arguing and bickering. This is the worst Washington has ever been. That’s just my take on it.

Amy: We are looking forward to you in Cincinnati. What can the fans look forward to that night?

Jonathan: It is a cool mix of all of our stuff. Some new, some old. Great video, great lights. We have a new sound guy. Our P.A. sounds like a big, giant jukebox. I don’t think we are too loud. I think we sound cool. I think we look pretty cool. They are going to see a great show. It is going to be a good first class Rock show with a lot of hits.