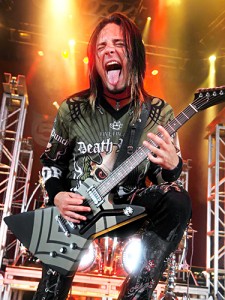 Five Finger Death Punch is one of the most popular Metal bands in the world. They are known for their catchy sound that resonates to their crowds and their songs have become arena anthems across the country. They released and continue to tour on their third studio album American Capitalist. Currently they are out headlining the Trespass America Festival with bands Trivium, Pop Evil, and Killswitch Engage.

Amy was able to spend some time with the band’s lead guitarist Jason Hook. The two discussed the band’s feverish tour schedule and the effect it has on the band member’s relationships as well as what makes their music so addictive. FFDP will be performing at the PNC Pavilion at Riverbend Wednesday night.

Amy: What has been the highlight of Trespass Festival  so far?

Jason: Well the first show was awesome. We opened the show on Friday the 13th just outside of Denver. The place was almost sold out, packed. We had all of our friends, family, record label, managers, and agents with us. It was a massive party, it was day one. It was awesome, really awesome.

Amy: Who leaves the biggest mess backstage at Trespass?

Jason: The biggest mess? As far as what, a hot mess or just messy?

Amy: It could be either.

Jason: I’ll give both to Ivan.

Amy: Ok, I wouldn’t picture that.

Jason: Well you don’t know him as well as I do.

Amy: Is it true that he still throws up before he performs?

Jason: I haven’t seen that lately but it might be because I tend to steer clear of him a little bit more than usual because of that. But he does do that. That is not an urban legend.

Amy: You consistently are having these hits with huge sports and military following. What is really the formula for creating a modern day Rock anthem?

Jason: I think that you have to keep things simple. People like a really consistent beat, something that has a good thump to it. Obviously, an easy to follow story line or a relatable story line and as many hooks as you can get into each section of the song for example the intro, the verse, the pre-chorus, the chorus, the bridge, the solo, all those are sections and if they get too long or drawn out or too complicated or the resolution set too high for the listener, they just miss out and it will go over their head. A big part of having an anthem is having something that is simple enough that many people can grab it easily like “Rock n Roll all night and party every day.”

Amy: Does the band ever write songs for a specific audience?

Jason: Not really. Most of us in the band have a background where we grew up listening to heavy bands but bands that were also on the radio. That reflects in the music we make. None of it is really contrived. We just do what we like. Fortunate for us, it catches on with a lot more people. Once you try to do something that is not honest, it is really hard to repeat it. You are always chasing or guessing what to do. It is better to know what you like to do and just do it.

Amy: You always have the crazy crowd surfing at the shows, the biggest Rock on the Range crowd surfing in history. Do you ever worry about fan safety?

Jason: All the time. All the time. It freaks us out. I see people getting beat up pretty good out there especially the people in the very front row because people crowd surf up from behind them, they can’t see that these 220 pound guys are being launched forward and the people in the front row are the last people that these heavy people land on their heads on the way into the pit. You get a lot of people getting smashed, and they have no idea it is happening until it happens. I keep saying, “Is there something we should do to discourage this? Should we say that we want people to be careful and keep your eyes open?” I do see a lot of people getting hammered, and it freaks me out. We are always thinking about it.

Amy: How do you stay friends living in such close quarters and being on the road almost all year?

Jason: How do we stay friends? We stay away from each other. The only way to control how we all get along is to make sure there is a good amount of separation. You need a little bit of on and a little off. For example, we get hotel rooms. The band gets hotel rooms. We get them every other day. The hotel rooms are essential and it doesn’t matter what it costs to have everybody be able go and have their own private space to go make phone calls, answer e-mails, relax, watch the TV program they want to watch, whatever. The off is just as important as the on because if you get too much together time all the time, then you are likely to have the engine run a little hot, you know what I am saying?

Jason: I don’t really want to focus on the fighting but as far as the sex part of it, I would say, all the girls like Ivan. The rest of us are just sort of swinging the bat. They all seem to want to get to Ivan. So I would say answer A., my final answer, Ivan. The thing is, to chase girls around, which is also to chase the party or stay up, all these people show up and they want to hang out with the band. This is their big night out. The problem is, if we participated in everybody’s big night out, then we end up having 42 or 55 nights in a row, and it is physically too hard. Imagine having 45 New Years Eve in a row. What kind of shape would you be in after that?

Amy: Yeah, bands now are a lot more, I don’t want to say mellow, but you can’t sustain it for long periods of time if this is what you are going to do.

Jason: God knows we have tried it. We don’t want to hurt the band. We don’t want to hurt the tour. We have a responsibility to not only talk to people during the day but to play in front of these large audiences, and I don’t want to go up there hung over and feel like crap and be fuzzy and making mistakes. It’s very hard. It’s ok when you are a club band, nobody cares, “Get me another beer.” Everyone is drunk anyway, but now we are talking about playing in front of 15,000 people at nine o’clock at night and it is a business now. It is for real.