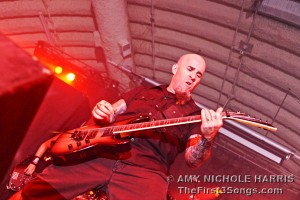 Anthrax has shaped the heavy metal movement in America. They have released their tenth studio album Worship Music which brings back the band’s early sound with the re-emergence of lead vocalist Joey Belladonna. I love heavy metal guitars so it was a privilege to speak to one of the all time metal guitar greats Scott Ian to preview their performance at Mayhem Fest tomorrow at Riverbend Music Center.

We discussed the highlights of Mayhem so far and how being a father has changed his perspective on life and music.

Amy: What has been the highlight of Mayhem Fest so far for you?

Scott: For me personally it is just the overall vibe. This is the first time we have done a US Festival traveling tour in the summer. We kind of knew what to expect since we are friends with Slayer, Slipknot and Motorhead but it has been so much fun to hang with our friends. The crew and everyone who works with Mayhem have been great and it really is a big family vibe out here. It is a really great place to show up for work.

Amy: What has it been like having Joey back the past few tours with the band?

Amy: You became a father last year for the first time. Has this changed your perspective on writing music or life in general?

Scott: I haven’t really written yet since he was born because we have been in touring mode.  One way that my perspective overall has changed is now having this person in my life that I love beyond anything I can comprehend. It makes me hate the human race even more because of all the pressure that comes with raising a child and wanting to protect him. People ask what do you have to be angry about and there is plenty to be pissed off about now. Look at what happened in Colorado last night with the guy shooting people in a movie theater. It sickens me to the pit of my stomach for a million reasons. What if that was my child in the movie theater?

Amy: It is terrible and it is beyond my comprehension how that can happen.

Scott: Up until he was born, I had my wife and close family but they are adults and are responsible for themselves. Now we have this person that is 100% helpless and relies on us to take care of him so there is this protective instinct that showed up as soon as he was born. I think that will have a big impact on my writing in the future when the time comes.

Amy: Do they come visit you on the road?

Scott: Yes they are here right now and have been with me for ten days.

Amy: What is the longest you have gone without playing guitar?

Amy: What is the biggest difference for you touring versus in the 1980’s?

Scott: Sometimes we sit around and talk about how did we ever get anything done before we had cell phones and laptops? In the eighties no one even knew what a cell phone was.  I remember the first time a tour manager had that big briefcase thing with a phone in it and it was something like $18 a minute to use it. The idea that we were able to do stuff back then and everything got done is amazing. I try to think about how it got done and I have no idea how we made it through one day let alone a whole tour without the technology.

Scott: I don’t know. I don’t smoke. I don’t drink excessively. My wife is saying talking with my mouth full so I guess I will go with that as a born and bred New Yorker.

Amy: What adjectives do you hope describe you at 75?

Scott: I hope when I am 75 no one has anything to say about me. I hope the only thing they say is “What ever happened to that guy?” because I am so far off the grid by that point.

Amy: I doubt that will happen.

Scott: No we will probably still be playing music and people will say “I can’t believe he is still banging his head.”

Amy: What has been your craziest fan story over the past few years?

Scott: The craziest audiences in the world are in South America in Chile with the craziest fans overall. We do a signing every day at the Rockstar Energy Drink tent and we get to meet a lot of fans every day on this tour. Anyone who would get anything Anthrax related tattooed on their body is amazing to me.  I can’t really call it too crazy because I have Gene Simmons and Angus from AC/DC tattooed on me. I understand that point of view of being such a fan that you would be willing to make that commitment but being the guy in Anthrax and seeing an Anthrax related tattoo makes you feel great because I know the commitment and I know how much Anthrax must mean to them.

Amy: What is the best guitar solo of all time?