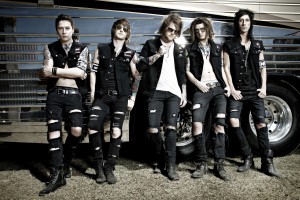 Asking Alexandria has a British Metal sound that embodies their front man Danny Worsnop. They are rough around the edges but take pride in the fact that they embody the stereotypical lifestyle. Nothing shows this more than the short film they just released Through Sin and Self Destruction. They have two studio albums, most notably Reckless and Relentless which blasted into the top ten on the rock charts in the states. In a music industry that has become so straight edge and proper, they are a voice of reckless rock n roll lifestyle. This attitude leads to incredible sounds and music that Metal fans can appreciate.

Amy had an entertaining meeting with lead singer Worsnop. They discussed the band’s shaky public relations past and what the band’s attitude means to the landscape of Metal and Rock n Roll. To catch Asking Alexandria, they will be a part of the Mayhem Festival on July 24th at the Riverbend Music Center.

Amy: I took the time yesterday and watched your new short film Through Sin and Self Destruction. What made you decide to do a short film like that when most people aren’t even doing videos anymore?

Danny: I think it was a chance to tell a story, kind of rumors about it for a long time but it had never reached the surface. It is a very loose, over-dramatized version of what was going on in my life at that point.

Amy: Does the film really portray the typical kind of lifestyle that you guys lead?

Danny: It is exaggerated but it is my lifestyle.

Amy: I talk to a lot of bands and it is being compared to Guns N Roses and the Appetite for Destruction days and I don’t talk to many bands that are able to sustain that.

Danny: Most bands these day aren’t even really bands. They are just people who kind of play music. There aren’t many real bands anymore so there really isn’t opportunity for that lifestyle to sustain. I am by no means condoning the lifestyle but it has always kind of been there in Rock N Roll.

Amy: Do you guys see a big difference when you tour in Europe versus touring in the U.S.?

Danny: Not really. At first there was a crowd size difference but we are known to the world now. It is pretty much the same no matter where we go, besides the currency. Currency is different and age of sexual consent.

Amy: Can you tell me the process for you guys as a band to put the songs together or write the songs?

Danny: The songs are based on whatever I am going through at the time. The albums are very honest and very personal. Everything that we have been doing is a story of my life.

Amy: You write lyrically. Do you guys come together and write the music together?

Amy: Where do you see yourself and the band in ten years?

Danny: Hopefully, in a much bigger house than I live in now driving a much nicer car with a lot of money. And hopefully still playing music in ten years.

Amy: Who are your current influences in music?

Danny: Yes, the same they always have been. Motley Crue, Aerosmith, Journey, Def Leppard and AC/DC, just Rock n Roll. I would much rather listen to those bands than Metal. I am not a Metal singer. I don’t listen to Metal music. In my eyes, we are a Metal band with a Rock n Roll singer.

Amy: You guys have a highly anticipated new album coming out this year. How is that coming along?

Danny: It is coming along really well. It is different than the previous records. It is far more mature. I have written some real songs. Hopefully that comes through.

Amy: Is it still looking at the September timeframe?

Danny: It is looking to be the end of November or beginning of December right now.

Amy: What has been your greatest rock star moment so far?

Danny: That is a tough one. It depends which way you want to go with it.  Do you want something completely inappropriate?

Amy: You could go with either or both.

Danny: We opened for Guns N Roses and we felt like true rock stars. That was definitely infamous. In terms of behavior, however it may be frowned upon, I guess the most shamed rock star moment was the whole Seattle incident.

Amy: You guys were out with Guns this year. What was the highlight of that for you guys?

Danny: Just the experience of doing it. It’s such a great honor to do something like that. It was mind-blowing at times.

Amy: Did you get to spend time with Axl at all or the band themselves?

Danny: No, I didn’t really hang around much at that show. I left pretty soon after we played.

Amy: I always ask this question of bands because I have had some pretty crazy stories over the years. Have you ever had any crazy boyfriend or husband stories?

Danny: I have never had a boyfriend or a husband. I’m sorry I’m going to let you down with that one.

Amy: No, with the girls coming after you guys?

Danny: We have had many of the guys come up to us and ask us to sleep with their girlfriends or wives. I did once have sex with a chick and later found out she was engaged to one of my good friends.

Amy: Did you tell him?

Danny: No and he still doesn’t know. We aren’t friends anymore so it would be impossible for me to tell him. It was a friend at the time.

Amy: Do you guys have any pre-show rituals. Do you come together and do anything special?

Danny: No. It was always something that was natural to me just like I’m going anywhere else except there are thousands of people watching it.

Amy: What can the fans look forward to at Mayhem?

Danny: It is going to be a real fun tour. I am going to be wearing leather. They can look forward to that. I may take my shirt off during the show.

Amy: It’s going to be pretty hot for leather.

Danny: Yeah, that’s why I may take it off.

Amy: It’s pretty hot. I don’t know if you’ll get the leather off.

Danny: I know I’m hot. Stop telling me. Stop flirting with me.

Amy: You guys have been out on the road. What is the best and worst part of being on the road?

Amy: Do you believe the cliché that there is no bad press?

Danny: I know there is bad press. I just don’t necessarily dislike it which is a good thing because I have had a hell of a lot of it.

Danny: Everyone is trying so hard to just be so nice now. I don’t want that. I want to be known as me and I am not a good person but I am ok with that. I have come to terms with it. It’s not that I am a bad person, it is just that I speak my mind and I don’t sugar coat stuff.

Amy: I interviewed Alice Cooper a few weeks ago and he is a legend and he seemed upset with current bands because nobody wanted to be rock stars anymore basically.

Danny: Last time I saw him he was on stage at the Golden God awards ceremony thanking me and for keeping Rock n Roll alive.