Q&A with Under the Streetlamp 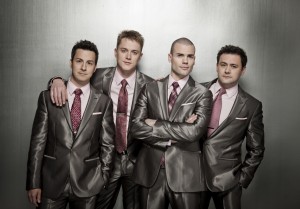 Under the Streetlamp is a new act storming the nation that presents audiences with a vocal performance that cannot be seen anywhere else. They took their Broadway sounds and have turned it into a show and production of their own that entertains outside of the box they are perceived to be in. They are barnstorming across the country on the heels of their PBS special and debut self-titled album giving a strong doo-wop/rockabilly/big band/folk sound.

Amy spoke with one of the vocalists, Michael Ingersoll, of Jersey Boys fame. The two discussed the rise and evolution of the group as well as where the sights are set for the future. It is possible for the Cincinnati audience to be part of the rise of upcoming stars this weekend as Under the Streetlamp performs at the PNC Pavilion at Riverbend Music Center on Sunday night.

Amy: You guys have been around for a couple years but you are a fairly new band. Can you tell me the story of how the band formed?

Michael: Absolutely. The four of us met when we were doing a play called Jersey Boys. Chris Jones and I did the first national tour of Jersey Boys and then he went off on his way and I met the other two fellows in Chicago and we did the production there. While we were in Jersey Boys, on our nights off we were putting together these concerts for clubs and local theaters to sing other music besides musicals like things from the Beach Boys, The Drifters, The Beatles and songs like that. After the show closed in Chicago, the momentum for us was actually following this band, this side-gig took off so we decided to pursue it rather than pursuing our individual career as actors. So we took advantage of that momentum and submitted a five minute demo of what we were doing to WTTW in Chicago and they said they were interested in helping us develop this project. That is the really short version. Once PBS was on board, we were able to book a 27 city tour which is pretty ambitious for a new group.

Amy: What is the biggest difference between performing in Jersey Boys on stage and the Under the Streetlamp group?

Michael: Well Jersey Boys, first and foremost is a musical with a story and a book. We are a band, we are a concert. There is nothing Broadway about us at all. We have full artistic control over everything we do. This is a project that we guide. This is a project that we own. That was really one of the big motivations for doing this because our acting careers where we were doing pretty well in the acting business. It is a concert and we have a lot of fun with each other. We have a lot of the fun with the audience. We take the music very seriously but we don’t take ourselves very seriously at all and the audience seems to enjoy that.

Amy: I have been listening to the album this weekend, how did you pick these particular songs to perform or put on the album?

Michael: The four of us, each of us is a lead singer. It is actually pretty rare for a band to have four lead singers. We wanted to lead with our strengths, our individual personality. Michael Cunio, for example, has a crazy high singing voice so he did Etta James “At Last” in Etta’s original key and it is always a big surprise to the audience when it is coming. Chris has got a very powerful, kind of balladeer voice so we sing “I Come For You” for him. I am kind of a folk rock-Rockabilly guy. Shonn is an incredible tap dancer and Broadway showman so we do “When You’re Smiling” for him. So basically we just chose the songs as it suited our strengths and flowed for the evening. We also chose artists that are in that same genre that we learned when we were in Jersey Boys. So that’s where we get The Beach Boys and The Drifters and The Beatles. Our music is fun, it is life-affirming, it is joyful, it makes people feel good. That is probably the biggest criteria for how we choose.

Amy: I know your family was an influence musically to you growing up and you have talked about that and I also know that you are from Dayton so you are a local for us. Did you have a good music program in Dayton growing up or did your family give you private lessons? How did you develop musically?

Michael: Well there are two major factors. My grandfather was a professional jazz pianist and so there was always music around in that environment. He taught me to play piano by ear and really get into jazz primarily. There is also an amazing arts program called Muse Machine in Dayton, Ohio. It is a program where kids come from all over, high schools from probably a 30, 40, 50 mile radius and every year they put on a musical and they bring in Broadway caliber directors and choreographers and producers. I was lucky enough to be cast into one of those shows and that is really where my interest exploded in performing and what led me to go to college and study acting. Check out the Muse Machine website, you can learn all about it, it is an amazing organization. I would credit them with the biggest influence, the biggest push.

Michael: When I am on the road, obviously my family is there but who doesn’t miss Graeter’s  Ice Cream and Skyline Chili and the Cincinnati Reds. I love those things. Those are the things I do as soon as I come back. I usually go to Skyline Chili and Graeter’s and try to catch a Reds game. I am a huge Reds fan and Bengals fan. I live in Los Angeles now so I miss the change of seasons in Ohio but it is good, friendly folks there and it was a wonderful place to grow up. Cincinnati has a vibrant and rich arts community so we just can’t wait to play. I also did a year at the Cincinnati Shakespeare Theater. That was my first actual professional acting job to work there for a year, so I got my start in Cincinnati.

Amy: Where do you see yourself in five years?

Michael: I think that we are on track to be a top tier act in the Adult Contemporary market with Michael Buble, Norah Jones, Diana Krall, and artists like that. I think we have a product that makes people happy. I think we have a got a very powerful team with PBS and our management. We are determined to take this to as many people as will possibly let us do it. We are doing every single thing we can to make sure we are here to stay. As long as we make people happy, we are optimistic that will happen in big ways.

Amy: You said you play piano, but do you guys play any instruments during the show or is it mainly just singing?

Michael: No, we are four singers and we have a seven piece band of incredible world class musicians. These are folks that have played with Sinatra and Frankie Valli and huge, huge names. We have a rhythm section and then three horns. That horn section helps kind of give it that street lamp character. It helps with that distinctive sound.

Amy: Tell us, in summary, what can the fans expect to see in the show?

Michael: There is a lot more music we perform live than on the DVD for the folks that are familiar with us from PBS. There is a lot more music and people come away from it often saying, “I can’t believe I laughed that much” or “I didn’t expect the show to touch me emotionally like it did.” I think people are going to laugh a lot. Hopefully they get up and dance a lot. When they leave, hopefully they feel better than when they came in from listening to this great, joyful music performed by people who really care about them having a good time. And also, if you have got time, just check out the Under the Streetlamp Facebook page because our fans comment on there after every single show, and really their comments, and there are tons and tons of them, say it all.

Amy: That was one of my next questions, are you guys using social media to promote the band?

Michael: Absolutely. We have a great website and great designer. We us Facebook, we use Twitter. Any way that we can possibly interact with our fans, we do so. We answer our own e-mail. We maintain our own Facebook page. We spend a lot of time talking to our fans. Anybody that writes in and asks us a question or comments on Facebook, we interact with. Without them, we are nobody. We make sure they not only feel welcome at the shows but feel welcome in the cyber universe 24/7.

Amy: What music are you currently listening to or what is inspiring you right now?

Michael: It is funny, a lot of the music that I listen to outside of the band is not music that has anything to do with what we do.

Amy: That is pretty common though. I talk to metal people all the time and they never listen to Metal music. It is really an interesting dynamic. I always find it interesting to see what people really listen to when they are not playing.