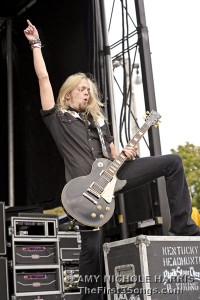 Black Stone Cherry is a Kentucky based band that combines their Southern roots with some hints of Metal in it. Last time we spoke with them, they had just released their third studio album Between the Devil and the Deep Blue Sea which they continue to tour on this summer. They have been featured on major tours with sensations Theory of a Deadman, Alter Bridge, and Nickelback and recently headlined a European tour.

Amy was able to speak with the band’s rhythm guitar player Ben Wells to preview their upcoming performance at Rock on the Range, where they will be taking the Main Stage on Sunday May 20th at the Columbus festival.

Amy: Last year, I spoke with Chris and he talked about how you guys love to go to Europe and how the fans embrace you in there. I know you just got off a European Tour. What was the highlight of that tour for you guys?

Ben: We did shows in Germany, France, Switzerland, Austria, and 14 shows in the UK and every single one was sold out. It was a pretty big accomplishment since we have been over there several tours and this was the first time we had one as big as it was. We just felt really good about that and they gave us a tour plaque to hang on our walls. That was pretty neat.

Amy: Are there any bands you are looking forward to seeing at Rock on the Range this year?

Amy: I think Marilyn Manson is that day too? 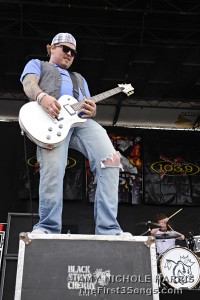 Ben: I’m not a huge fan of his but I do like Rob Zombie.

Amy: “In My Blood” is out right now and has blown up everywhere and the video has a story of a soldier coming home from war. Can you tell me the story behind “In My Blood”?

Ben: It was the last song we wrote for the album and pretty much it is a song we wrote about our lives and what we do. We leave things and people we love, go out on the road and do the things we love. Not only in our career do we do this but also military, professional athletes, fishermen, truck drivers, people like that every single day they have to leave their families. We wanted to write a song that kind of came from our perspective, kind of like our “Ramblin Man.” We made the video for it and thought it came across great. People really got the idea and the vibe of the song once they saw the video.

Amy: I know your family has ties to the Kentucky Headhunters. Have you guys thought about doing collaborations with them?

Ben:  We have live before, nothing on CD yet. I wouldn’t say it’s completely out of the question but we have played several shows together. Usually when we do, one band ends up on the other band’s stage falling in together. 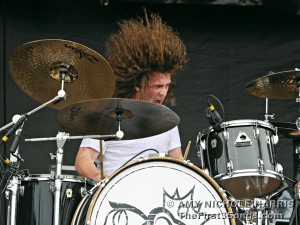 Ben: Right, not yet anyway.

Amy: What are your summer touring plans?

Ben: We are out right now with Chickenfoot until June 10th and then we come home and we leave for Europe on June 20th for about three and a half weeks. Then we get back in the middle of July and are doing some US festivals. So really, staying busy, trying to hit as many shows as we can.

Amy: What has been the funnest part about being around Chickenfoot?

Ben: The tour starts tomorrow with them. We have been out for about five days now just doing some festivals and playing our own shows. We pick up with Chickenfoot tomorrow but we have heard great things. We have never played with them before but we are excited about it.

Amy: There have been a lot of changes at Roadrunner Records, your record label. I know the CEO and Founder stepped down recently. Has the band seen any changes? 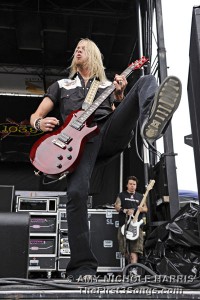 Ben: We haven’t personally yet because we haven’t been around everybody yet. I know we had some good friends lose their jobs. I hope the label knows what they are doing because they let go a lot of great people overseas and in America go so we’ll see if they know what they are doing.

Amy: What would be your dream piece of gear to own if you could from any time in history? What piece of gear would you like to play?

Ben: Any guitar that Elvis Pressley owned would be fine with me.

Amy: I’m sure you could find one. I recently just saw one in New Orleans.

Ben: Yeah but I can’t afford that though.

Amy: What has been your greatest rock star moment?

Ben: I really don’t know. We had some pretty cool moments playing some pretty big festivals in front of 60,000 people or more, getting to meet some of the guys in Aerosmith, getting to do some certain things. I’d say any time that somebody comes up to tell us how much the bands means to them. That’s a pretty good feeling and is a pretty special moment because it really lets you know what you do is appreciated by someone.