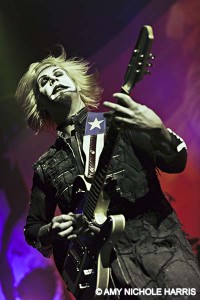 John 5 has seen almost everything in Rock music from his days with David Lee Roth, Marilyn Manson, and currently with Rob Zombie and has been credited on songs in all aspects of music from Saliva to Salt n Pepa to k.d. Lang to an upcoming collaboration with Rod Stewart.  He has gained the reputation as a musical genius and one of the most action packed guitarists in the world. He has just released his sixth solo album, God Told Me To which mixes acoustic Spanish style guitar along with heavy metal riffs.

Amy caught up with the guitar player to promote the new album and Rob Zombie’s upcoming appearance at Rock on the Range in Columbus. The two discussed some of the dark aspects of what goes into his writing as well as the lighter aspects of what puts him to sleep every night.  John 5 will take the stage with headliner Rob Zombie on Sunday May 20th in Columbus.

Amy: Can you tell us about the name of your album God Told Me To?

John: The name, it is funny because I remember, I am from Michigan, I am from Grosse Pointe. I was upper class growing up there. I was brought up in a really nice environment and home and I remember the night before I was leaving for California to really give it my shot saying, “I am going to try this. I am going to try to be this musician type of thing.” I remember I was saying my little prayer. I never wished to be a “rockstar.” I just wanted to be a working musician. My dreams didn’t even go past a session player or a working musician like that. It was too far beyond my dreams. That’s kind of what the title means, that kind of thing, but also you can look at in the negative way, like when someone does a horrific murder, they always say, “Oh, God told me to.”

Amy: I have read a lot of discussion in your recent interviews about serial killers and even the song “Night Stalker” being written about Richard Ramirez.  Why the serial killer references behind that? Do you have an interest in this type of people or the history and stories behind it?

Amy: I got a copy of the album and have been listening to it today. I love the acoustic Spanish-style versions on some of the songs. I know you are a lifelong learner. Did you take specific lessons around Flamenco or Spanish-style guitar lessons? 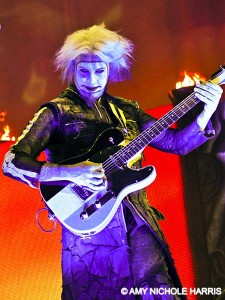 John: Yes I have always tried to learn, it is what keeps me sane. I love to learn and I started doing a lot of studying of Spanish style music and really started getting into it and how it is just a completely different form of guitar playing. It is just like if you started speaking in a different language like Japanese or something. It is something that you have to study and work at a lot. That is what I enjoy because I love the guitar so much. Yes, I did a lot of studying and research on that.

Amy: What current music is inspiring me right now?

John: What current music is inspiring? You know what, and this will be a surprise, but I usually am very honest.  I have had a little epiphany and this is very shocking. I was watching some movie or something like that and a N.W.A. song was on and I am no fan of rap music, I really am not because I like the guitar. So I heard this N.W.A. song, I think it was “Gangster Gangster” and I was like, “This is really, really, really good.” It was eye-opening to me and I appreciate it now. I was pretty taken back by it. I would have to say N.W.A. which I can’t believe I am saying but it is the truth.

Amy: There are a lot of bands right now collaborating outside their genres. Korn has collaborated with Skrillex and trying to create a lot of different sounds which would traditionally maybe not be Metal music.

John: Sure and I think it is very important for that to happen because of the fact music has to always evolve and if it doesn’t, it has failed. It is good that it is evolving.

Amy: I know that you are always writing constantly. How did you narrow the songs for the album?

John: I kind of would write a certain thing and I would say, “It would be really cool if I had something like this next…” because I like a nice flow to the record and a lot of people don’t like the shredding thing all the time, I don’t even, this is coming from me. I like a nice even flow to everything and the acoustic stuff is a nice breather to everything that is going on.

John: I don’t know because I love country music, maybe. Maybe when I am too old to jump around stage like a monkey and maybe I will because I really love country music. I love Loretta Lynn and I love Roy Clark, and Johnny Cash, everybody. I just really appreciate it a lot, for sure.

Amy: Every year you play the Dimebag Bash tribute out in L.A. Did you do that this year and why is that important to you?

Amy: Getting back to the new album, my favorite song was “The Lust Killer,” can you tell me a little bit of the story behind that song?

John: The “Lust Killer,” that was, I forget where he was from, but he was this serial killer and that was his nickname, the Lust Killer. I love that song. It was a lot of fun, great production in that one. That one took a lot of time writing, I took a lot of time and attention to it, harmonies and melodies. It was one of my favorites too.

Amy: Last week was the anniversary of Columbine and I know that you and the band went through a hard time when you were with Marilyn Manson following that event. Does that affect you in any way every year when the anniversary rolls around?

Amy: I know you are playing the same day as Marilyn Manson this time at Rock on the Range. When was the last time that you saw him? I’m sure you will run into each other that day.

John: I saw him at the Golden God Awards and I didn’t say hi. Ginger, his old drummer is playing with us in Rob Zombie. It’s fine. We don’t have any bad blood. We are adults; it’s fine. We have no problems with each other whatsoever. I know it would make a great story if we did but we don’t.

Amy: I do have a few fun questions, just the first thing that comes to your head as we finish up.

Amy: What was your worst job you have ever had?

John: Worst job I have ever had, I know, I was cleaning carpets. It was terrible.

Amy: Do you have any scars?

John: I was bit by a dog when I was little and I have a scar on my right arm, but my arm is so tattooed I haven’t seen it. I guess it is still there, it has to be there.

Amy: What is the last thing you do before you go to sleep?

Amy: Do you do that with Piggy D because I interviewed him last year and he said he loved the horror movies as well.

John: I know he watches movies but I don’t think they are horror movies. They have to be the Universal horror movies like Frankenstein, Dracula, Mummy, Creature of the Black Lagoon, Invisible Man. It has to be that series. 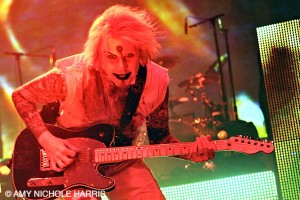 Amy: What is the best guitar solo of all time?

Amy: “Beat It” did make me smile on the new album.

John: “Beat It” is a close second.

Amy: Are you planning any solo touring on the new album or are you going to use the Zombie dates to promote it?

John: I’m so busy, maybe I don’t know. We are so busy. We are going to start making a Zombie record after the tour. I don’t know but if I get some time I am definitely going to do it.

Amy: Are you going to be playing any new stuff at Rock on the Range?

John: No, we want to keep that under wraps. I have been also doing that Lords of Salem soundtrack but we have a ton of ideas for the new album.